hroughout the previous two days, 420 players had been eliminated in sixteen rounds of Standard and Theros Booster Draft, and now only eight remained to compete in the single-elimination playoff rounds, again using their Standard decks to vie for the title of Pro Tour champion. In this quarterfinal pairing, Sam Black from the United States met Japan's Kentarou Yamamoto.

While Twitter yesterday called Yamamoto "Japan's potential next big thing," Yamamoto has actually been around for quite a while, even making it as far as the finals of Pro Tour San Diego in 2007. Black likewise has one previous Top 8 to his name, courtesy of Pro Tour Philadelphia two years ago, and several good finishes at various Pro Tours and Grand Prix events has him at No. 25 in the Top Pro Rankings.

The match-up here is two devotion decks facing off, although the two couldn't have been more different. While Black's deck was aiming to beat down with Thassa, God of the Sea and Master of Waves, Yamamoto's would be fighting back with creature removal and eventually close the game with some heavy hitters like Desecration Demon and Gray Merchant of Asphodel. 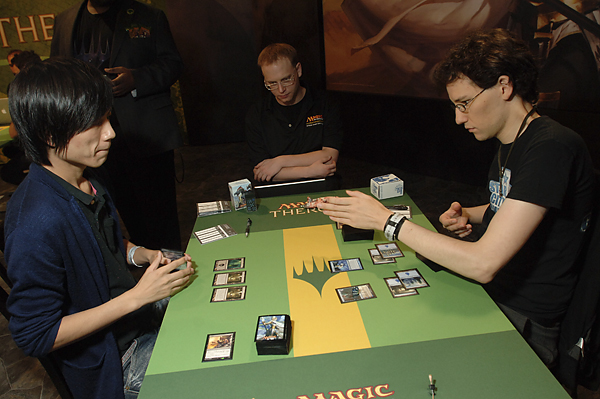 In the first game, Black led with Judge's Familiar, Omenspeaker, and Jace, Architect of Thought, losing both creatures to Devour Flesh and his planeswalker to attacks from Yamamoto's Mutavault. Black regrouped with another Judge's Familiar and Master of Waves, but another removal spell, Doom Blade, killed that as well. Yet all this time Yamamoto hadn't been able to develop any board presence of his own, and when Black cast Tidebinder Mage and another Master of Waves, the Japanese found himself in deep trouble. This time, the Master stuck around and two attacks later Black had taken the lead. 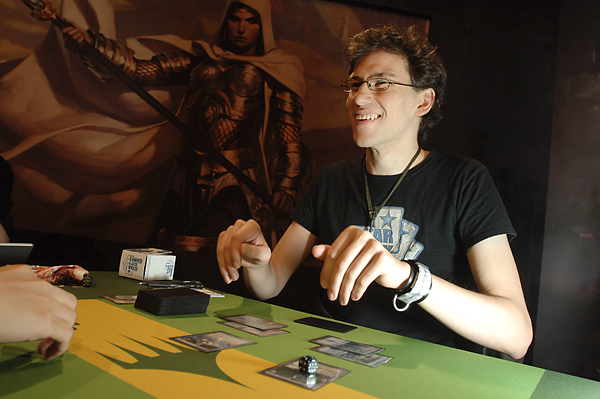 Black takes an early lead on the back of some waves.

For Game 2, the action started with Black's turn two Tidebinder Mage, followed by Yamamoto's Duress, revealing a hand of Master of Waves, Frostburn Weird, more Tidebinder Mage, Thassa, God of the Sea, and two copies of Bident of Thassa. What this hand was missing though was land. Yamamoto took one of the Bidents and passed the turn back to Black who ripped an Island from the top of his deck to cast Thassa, God of the Sea. When Yamamoto had no further play, the deity took over the game. Not enough that its scrying helped Black get out of his earlier mana trouble for good, but a second Tidebinder Mage meant the God could interfere in the affairs of the mortals, smashing for a solid 5 points of damage a turn and proving just how mortal Yamamoto really was.

Bident of Thassa on Black's next turn provided a more reliable source of devotion to blue as well as a steady stream of extra cards and Yamamoto never cast another spell.

Down two games now, Yamamoto had his back against the wall. He would need three straight wins to advance to the semifinals; there was no more room for missteps here. Meanwhile, Black commented on his quick 2-0 lead. "Well, that went well."

His Thoughtseize at the start of Game 3 revealed a hand of Rapid Hybridization, Tidebinder Mage, Master of Waves, Cloudfin Raptor, and three Islands. He took the Hybridization. Black started with Cloudfin Raptor and peeled a Tidebinder Mage for turn two. Meanwhile Yamamoto had cast Pack Rat. Since Black no longer had Rapid Hybridization, the game was off to a race. Currently, with the help of his turn three Nightveil Specter, Black was leading, but soon two 3/3 Rats came crashing in. Black's Master of Waves was poised to turn the game, but Doom Blade killed it. This meant Yamamoto only had two mana left, not enough to produce another Pack Rat token, enough however to simply cast another copy from his hand. Suddenly there were four Rats, three attacking for 12. 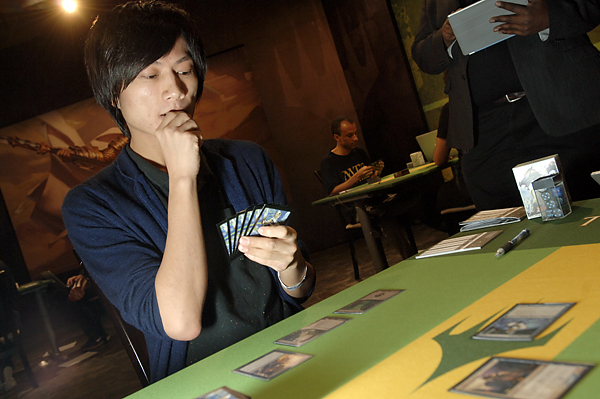 Yamamoto reminds players what playing against a second-turn Pack Rat can feel like.

At the beginning of the turn, Black had still been well ahead in the damage race, but he now he fell to 2. Neither his hand, draw step, nor any amount of deliberation provided an answer and so the score stood at 2-1, with Black still up a game.

Game 4 began with a couple of trades. Black lost Tidebinder Mage to Pharika's Cure, Nightveil Specter to Devour Flesh, Bident of Thassa to Thoughtseize, and another Nightveil Specter to Hero's Downfall. Two Frostburn Weirds stuck during these turns, but Black's Master of Waves immediately died to Pharika's Cure and another Master was answered with more copies of Pharika's Cure. But all this time, Frostburn Weirds had slowly been nibbling at Yamamoto's life total, and when Black was finally out of bigger threats occupying his mana, they increased their efforts considerably and were joined by Mutavault. Yamamoto soon fell to 7, and on the next attack, he was already forced to get rid of one Weird via Hero's Downfall. He went to 2, then finally to 0.

"I didn't expect the match to go that well," Black said moments after his 3-1 victory. "I expected to win Game 1 but to have a harder time after sideboarding. I was surprised by some of his sideboarding choices though. Then again, I was also surprised by how good Pack Rat actually was."

Sam Black wins 3-1 and advances to the Semifinals!