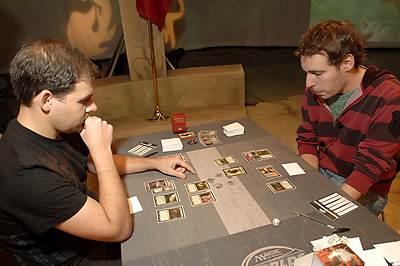 David Reitbauer of Austria and Florian Pils of Germany face the Jund Mirror.David Reitbauer comes from Vienna, Austria. He qualified for this tournament on rating and has no previous Pro Tour or Grand Prix Top 8 finishes, but this is not the first time he has played under the lights at the World Championships. Two years ago at the 2007 World Championships in New York, he was on the Austrian National Team that finished second in the team competition to Switzerland.

Florian Pils hails from Munich, Germany. Although he has never before been on the final day stage at the World Championships, he is an experienced Pro Tour player, with many Top 16 and Top 32 finishes at Pro Tours and two Grand Prix Top 8s.

The two players were cordial before the match. Pils’s deck needed to be resleeved, and Reitbauer volunteered to help. Pils was called away for a sound check, and Reitbauer continued to sleeve. He finished before Pils returned, so he de-sideboarded his opponent’s deck as well—without a decklist to refer to. When Pils returned, he checked that this was done correctly, then raised an eyebrow. The players in the Top 8 were all given their opponents’ deck lists last night, and Reitbauer clearly knew Pils’s deck down to the card.

As if in rejoinder, Pils won the die roll and chose to play first.

Pils made the first play of the game on his third turn with a Blightning that took a Terminate and Lightning Bolt from Rietbauer’s hand. Reitbauer made no play on his third turn, and Pils pressed with a Garruk Wildspeaker that brought a Beast token to the table. A Blightning from Reitbauer convinced Garruk to leave, and also cost Pils a Lightning Bolt and a land. The remaining Beast attacked for 3, and a second Blightning from Pils took another 3 life points, as well as a Broodmage Dragon and a Master of the Wild Hunt.

At the end of the storm of Blightnings, Reitbauer was at 10 to his opponent’s 19, and the only card in his hand was a Sprouting Thrinax. However, he drew the perfect card in a Bloodbraid Elf, which procured him a Putrid Leech. The Bloodbraid Elf attacked for three. Both players played Sprouting Thrinaxes on their next turns, but thanks to Oran-Rief, the Vastwood, Reitbauer’s was one bigger. After a sad look at the +1/+1 counter on his opponent’s Thrinax, Pils traded his own for Reitbauer’s attacking Bloodbraid Elf.

On Pils’s next turn, he played a Putrid Leech and a land, and passed with no hand. Reitbauer looked strong with two cards still, one of which was Garruk Wildspeaker. Pils frowned at the beast it made, then willed his own single copy of Oran-Rief, the Vastwood to jump to the top of his deck. He played it with a smile and passed, sitting behind his own beast, three saprolings, and Putrid Leech. 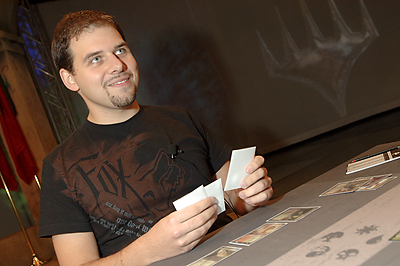 Reitbauer closes in.Reitbauer pressed his advantage. He asked Garruk to make a second beast, then attacked with the first one. Pils eyed his Putrid Leech suspiciously, but blocked with it and paid two life anyway. As suspected, Reitbauer had a trick in the form of Burst Lightning. He killed the Leech with it, then activated Oran-Rief to grow the second Beast before passing the turn back.

Pils drew, and surveyed his opponents board: Garruk with one counter, a Sprouting Thrinax and Beast token that were 4/4 thanks to +1/+1 counters, a 3/3 Beast, and a Putrid Leech. He used a freshly drawn Blightning to take out Garruk, but Reitbauer’s empty hand made that a feeble triumph.

On his next turn, Reitbauer decided it was finally time to send his army in. Pils chump-blocked a Beast with a Saproling, and used a second saproling along with a Beast token to trade for the Putrid Leech, but the lone Saproling he had left after combat did not look impressive. He continued to backpedal on his next turn, chump-blocking one beast with the Saproling and Lightning Bolting the other, but still fell to 7 from the attack. He drew nothing, and Reibauer’s next attack killed him.

Between games, Pils took advantage of a change in DCI tournament policy that allows players to look at notes between games, and asked to see his opponent’s deck list. Reitbauer’s face fell, apparently disappointed that his opponent did not know his deck as well as he knew Pils’s. When the deck lists arrived, however, Pils only spent a moment checking one number before sending the judge away again, and Reitbauer nodded with a smile. Clearly these competitors were well prepared.

Both players sideboarded similarly for this mirror match. The Maelstrom Pulses came out, and the Goblin Ruinblasters came in.

Pils started Game 2 with a blazing start of two Putrid Leeches by turn three. Reitbauer’s first play was a Sprouting Thrinax, which he threw in front of one of the Leeches. Pils pressed his advantage with a Mind Rot, which prompted Reitbauer to pitch a Blightning and a Garruk Wildspeaker.

On Reitbauer’s fourth turn, he made up the lost ground with a Bloodbraid Elf that brought a second Sprouting Thrinax to keep it company. Reitbuaer sat back in his chair, then attacked with the fresh Bloodbraid Elf and all three of the Saproling tokens from the first Thrinax. Suddenly, Reitbauer appeared to be in the lead, with 14 life to Pils’s mere 10.

Pils’s two Putrid Leeches had taken their toll, and it was clear that Pils was feeling it as he stared at his pair of them while he thought. He played a fifth land and passed, signaling Bituminous Blast.

Reitbauer played another Bloodbraid Elf, this time hitting a Putrid Leech. He chose to leave Savage Lands untapped rather than Oran-Rief, the Vastwood, however, signaling a Lightning Bolt. He put the cap on the turn by attacking with a single Saproling token. Pils blocked it with a Putrid Leech and a laugh, and the expected Lightning Bolt came to finish the Leech. Pils also had the expected trick, and his Bituminous Blast killed Reitbauer’s leech and found a sideboarded Goblin Ruinblaster. 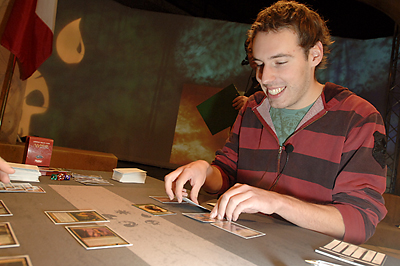 Pils keeps a good face on things even as he struggles to stay in it.Still on five lands, Pils cast Garruk Wildspeaker, untapped two lands, and played Sprouting Thrinax. Reitbauer responded with Bituminous Blast on Putrid Leech, first hitting a Bloodbraid Elf and then hitting a Lightning Bolt. The Lightning Bolt went straight at Pils’s face, putting him at a mere six life. Reitbauer then attacked with all of his creatures for more than enough.

The opening of the third game was a study in symmetry. Both players mulliganed to six, and both players’ first plays of the game were Blightnings, to which both players discarded a Bituminous Blast and a land. Pils was the first to break the symmetry with a kicked Goblin Ruinblaster, which destroyed a Savage Lands. Reitbauer responded with a Blightning that took Pils’s last two cards.

Reitbauer matched Pils’s Goblin Ruinblaster with one of his own, but thanks to Pils’s he did not have a second red mana to kick it. The two players exchanged Ruinblaster hits until Reitbauer drew a fifth land, when he used a Bituminous Blast to kill his opponent’s Ruinblaster and find a second one of his own.

Pils drew a fifth land on his next turn, but it was a tapped Rootbound Crag. Reitbauer’s topdecked Blightning both took the two Bituminous Blasts that Pils’s tapped fifth land kept him from casting and killed Pils outright after a final hit from the two Goblin Ruinblasters.

David Reitbauer wins 3–0 and advances to the Semifinals!