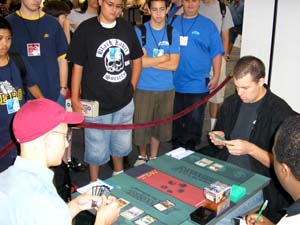 Jon Sonne has been on the gravy train for about six years longer than Alex Lieberman, neither are strangers to Sunday play, with each able to claim a Grand Prix victory in this season (Sonne at Austin '05, Lieberman at Minneapolis '05). Semi-teammates on the revamped Seven Kings, they are playing similar Blue Urzatron decks, with the primary difference being Jon's access to Jushi Apprentice out of the board as opposed to Alex's Cranial Extractions. Those were made possible through a single swamp and some Talismans of Dominance, intended to improve the post-board Tooth and Nail matchup - a deck which is conspicuously absent from the Top 8.

After overcoming some technical difficulties, our coverage picks up on turn six of Game 1. Both payers had established an early Urzatron, with Alex adding a Solemn Simulacrum and Sonne a Mindslaver, waiting for his next untap to do its business. On his turn Alex played his own Mindslaver, blowing up both, improved his mana with a Talisman of Dominance, and attempted a Sensei's Divining Top - one of the significant factors in determining the outcome of the mirror - but was foiled by Jon's Mana Leak. Jon untapped and played a Top of his own, followed by a Solemn Simulacrum and a Thirst for Knowledge, grabbed using the draw ability of the Top, and discarding Triskelion.

Alex resolved his second attempt at a Top, however, and mad Topping ensued for the next three or four turns, wrapped around the occasional card-drawing or mana-development feint. Alex slipped a Triskelion into play and Sonne token resistance; forcing Alex to leave open only two mana. Sonne's plan became clear however, when Jon brought Memnarch into play and Alex was unable to counter. As it turns out, however, countering was not in Alex's plans; rather he again used the legend rule to reset the board casting his own Memnarch to send both to the bin. Alex continued to send the Simulacrum into the red zone bringing Jon to an increasingly uncomfortable total of 9.

Jon's next turn was complex - it involved at least three spins of the Top, a Concentrate, a Thirst for Knowledge, and a Condescend on Jon's own Mox to scry away chaff. All of this resulted, however, in an Echoing Truth on Alex's Simulacrum and a Mindslaver hiding on top of Jon's library. Jon cast and used Slaver after Alex's blank turn; Alex topped in the hopes of minimizing the potential damage, but Jon's second Slaver left Alex with lands in hand, lands in the top three cards of his library and Jon with a full grip. Jon's freshly cast Triskelion was enough to send Alex scooping.

Here is where the decks go their separate ways. Jon's deck is set up much better for the mirror, with access to Jushi Apprentice, which Alex has very few ways to kill. Alex instead has to rely on Cranial Extractions to nullify Jon's multiple threats. 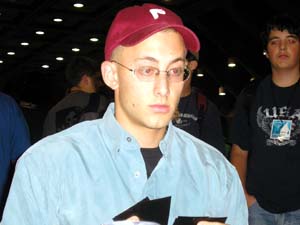 Lieberman battled back in Game 2 thanks to Cranial Extraction.

Alex jumped to a huge advantage in this game, with a turn-two Talisman and the full power grid on turn three, which enabled a wickedly early Mindslaver. Sonne managed a first-turn Top and a turn-two Jushi Apprentice. On turn three Sonne passed, leaving his mana available to respond to the ensuing Slaver activation, burying his Top to arrange his draw step and returning Alex's Talisman with Echoing Truth. Alex finished his turn by casting a Top of his own.

Sonne revealed a hand which would be quite gassy, were he ever to have the opportunity to use it, including Meloku, Mana Leak, Oboro, Memnarch and Solemn x2. Alex cracked Jon's Top, played Oboro and Solemn to shuffle it away and finished by activating his own Top.

Alex Extracted away all of Sonne's Mindslavers, and had the option of using a second Extraction, but chose instead to keep counterspell mana open. Jon drew with his Jushi Apprentice, and played Simulacrum, tapping out. Alex's second Extraction removed Jon's Annuls, and he forced a Memnarch through Jon's sole counter - eliciting a concession from Sonne.

Sonne chose to play and keep his initial draw. Alex mulliganed to 6.

Both players played nothing but land until turn five, when Alex resolved a Top. Jon accelerated his development with a Solemn Simulacrum and shipped the turn back to Alex, whose Top had found him everyone's favorite limited bomb, Meloku the Clouded Mirror of Victory. All of a sudden, Alex's mulligan began to look like not that big a deal. However, just as suddenly, Alex was back to square one when Jon cast a Meloku of his own, sending both to the grumper, and served for two with his Simulacrum.

Alex untapped and cast Thirst for Knowledge, adding a Chrome Mox and Talisman to his side of the board. But on turn eight, Jon struck gold, drawing an Urza's Mine, and setting up the full Urzatron, allowing Jon to bait out an Annul with a Mindslaver, resolve his own Top, and keep four mana open for counter magic or end-of-turn options.

Alex Topped, drew and emptied his hand playing Island and Mindslaver, but lacked the mana to activate it. Sonne responded with a Thirst and spin of his Top, drawing into Memnarch. Facing the theft of his own Mindslaver and a 4/5 giant, Lieberman quickly moved on to Game 4. 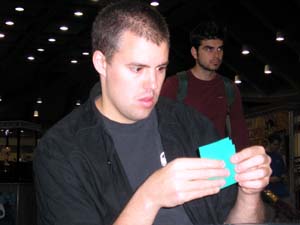 As we headed to Game 4, I commented to the pair that it seems like they engage in a "glorious struggle" for, say, 15 turns and then someone blinks and scoops.

"Its pretty much about who gets the Urzatron first, really," said Alex.

"You got the Urzatron first Game 1," countered Sonne (which Jon won), "Yeah, with no action though."

Prophetically, Alex blazed out of the gate with a turn-two Talisman, and a turn-three Urzatron, powering out Meloku before Sonne had even played his third land. Sonne played a second Urza's Tower to go with his sole Island and passed the turn. Meloku swung for 2 and Alex drew out a Mana Leak with Triskelion, opting to Thirst with his remaining three mana rather than pay the service charge for the 4/4. Sonne Thirsted on his turn discarding Serum Visions and Jushi Apprentice and, despite the extra cards, missed his fourth land drop.

Alex poured it on, playing an Island and slamming a Memnarch down. Well, OK, he didn't so much slam it down as place it meekly on the stack and wait for Jon to respond despite his having no blue mana open. Proper and polite, but, as far as I am concerned, Memnarch tiptoes into play for no mana. So when Memnarch resolved he SLAMMED into play. Jon, obviously shaken by the slamming, fought the good fight for two more turns, but his deck offered no permanent solutions, and moments later the pair was off to the final game.

After such a hard-fought first four games, Game 5 was anticlimactic. Sonne resolved a first-turn Top and a two Jushi Apprentices which effectively ensured that Jon would be drawing two of the three best cards each turn from turn three onward. To compound matters, Alex flooded like the Nile delta, drawing 15 mana sources in his first 19 cards - well, 20 out of 28 cards really, since he scryed away three cards with a pair of Condescends and Thirsted away two more lands looking for action.

Although Alex managed to play a Triskelion on turn eight (which picked off the Jushi), the damage was done, with Sonne playing a Meloku and, well, we'll SAY slamming down a Memnarch on his turn.

Alex cast and cracked a desperation Mindslaver, but he had to hope for Sonne to not only have no countermagic, but to also have at least two Echoing Truths. Sonne showed a handful of Mindslavers and Mana Leaks, and it was all over but the cryin'.