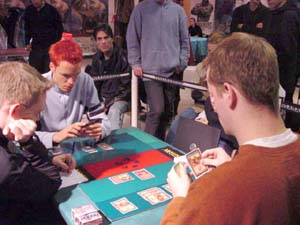 Bob Maher came all the way from the US to play in this GP to earn some PT points in order to get back on the Masters after his suspension. He's already there with his third place at PT Boston and his performance this weekend.

David Linder plays about one GP a year and this is his third GP top 8 already so he can be considered to be a specialist in GP's.

Bob has to be seen as the favorite to take this match as his g/r deck is loaded with good cards while David struggled during the draft as Jens Krause moved into one of his colors. To make matters even worse David has to mulligan twice before finally keeping a hand containing 5 cards. He had a turn 1 play though being a Imagecrafter. A turn 3 morph creature from Bob turned out to be a Skirk Commando killing the Imagecrafter on turn 4. The following turns when David played a creature Bob just shocked it away. And when Bob ran out of Shocks he played a Words of War, effectively making every card he will, or, more accurately, won't draw a Shock. Being at 6 life there's no way out for David anymore so he scoops up his cards hoping for better fortune game 2. 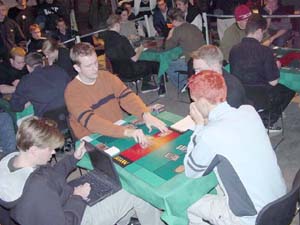 No mulligans this game and again David was the first to lay a creature, this time a turn 2 Shepherd of Rot. Bob played a Wirewood Herald and a Wellwisher on the following turns and as David knows Bob would be eager to block with his Herald in order to get a better Elf out of his deck, David only attacks with his Sage Aven. This didn't hurt Bob all that much as his Wellwisher gained him 2 a turn. David increased his airforce with a Screaming Seahawk, which was fetching his brother. The whole airforce became stopped though when Bob played a Spitting Gourma. When Bob attacked with his Herald David decides to block. This enabled Bob to get his Wirewood Savage which didn't make things better for David as now Bob would be rewarded for every beast he played except for the fact that they are twice as big as any creature in David's deck.

Next turn Bob played a Treespring Lorian and drew a card. David had a trick though: cycling Dirge of Dread giving his Haunted Cadaver fear and then sacrificing it in order to make Bob discard his 3 cards in his hand. When the Lorian attacked it got gang blocked dealing 4 points to the Lorian. Not the best play by David this weekend though because Bob had a Snarling Undorak which gave the Lorian +1/+1 once damage was on the stack. With the board cleared at David's side Bob's fatties were able to finish David off the next turn.