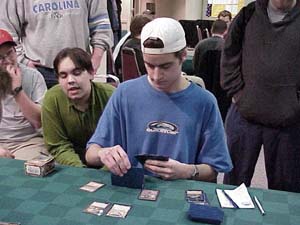 This quarterfinal match pitted the old versus the new. Bob Maher Jr. has been a Pro Tour regular since Pro Tour one, where he played in the juniors. He quickly learned that he was good enough to play with the big boys, and soon racked up more accomplishments than can easily be mentioned. Known on the Tour as "The Great One", Maher has been on the US National Team, has been a Pro Tour Champion and Worlds Finalist and even Player of the Year. And that's just the tip of the iceberg. Bob only lost two matches in this Grand Prix before the finals; both of the people who beat him were later rejected from the tournament. Bob is also getting married next weekend, and this final tourney while single will earn him a nice wedding present from Wizards of the Coast (as if he needs the money).

Louis Boileau on the other hand is a new face on the Pro Tour. The Montreal native has played in the Canadian Nationals, but no other major events. This is even his first Grand Prix. Louis proved this weekend that he too knows how to play with the big boys, piloting himself to a sixth place finish after the swiss rounds. 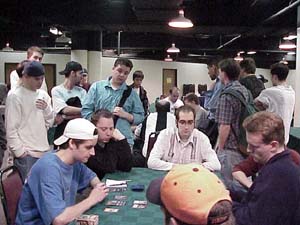 Louis won the coin flip and chose to play first, which will be very helpful against Maher's super-fast red green beatdown deck. Boileau's deck is a slower blue white black deck built around his first pick, Dromar, the Banisher. Louis played the first creature, a Ravenous Rat, but failed to play a third land. Meanwhile, Bob summoned an army of cheap creatures, including Firebrand Ranger, Horned Kavu, and a Yavimaya Barbarian, which is very good against Boileau's many blue creatures. Louis finally draws an Island to allow him to play Shoreline Raider and Metathran Zombie to slow the beatdown, but Maher keeps the hits coming with Slingshot Goblin, threatening to put Boileau away. Boileau has an Exotic Curse for the Goblin and a Tidal Visionary to hopefully stop the Yavimaya Barbarian. Bob has finally run out of creatures, while the newcomer Hobble's the Barbarian and starts to drop fliers. Maher draws land after land, while Louis draws flier after flier. Bob tries to muster a defense with a kicked Pincer Spider, but Louis has Agonizing Demise and that ends the game, with Maher holding five land.

Bob brings in a third Slingshot Goblin and also gets to play first in the next game, which gives him a definite advantage. Unfortunately he plays no forest for the first five turns, but he does have a Chromatic Sphere which allows him to cast a second turn Thornscape Familiar. He follows this with one of the Slingshot Goblins and a Thunderscape Apprentice on the third turn. Boileau is able to play Ravenous Rats, which look like they will slow Maher down as well as force him to discard Elvish Champion. Bob has a Scorching Lava for the Rats, but Louis is able to bounce the Familiar, which Bob is unable to replay. The Goblin gets Demised, and Bob still doesn't have a Forest. He is forced to blow a Zap on Louis, and is rewarded with a Forest finally. Louis has Hobble to slow the beatdown, as well as another Ravenous Rats. Bob frowns, knocks on his deck, and sure enough pulls his bomb, a Shivan Wurm, which also lets him get rid of the Hobble. Louis does not find an answer for the Wurm, and is very quickly trampled to death. Boileau later says that he kept a six land, which certainly hurt him this game. 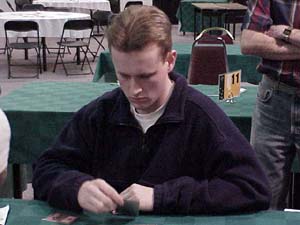 However, Louis is able to play first again, giving him hope. Unfortunately he plays only swamps for the first few turns, while Bob as usual comes out with quick creatures, including the ever present Slingshot Goblin. Louis draws an Island for the fourth turn, but ironically still can't play anything useful, due to the Slingshot. Bob plays two more creatures, but Louis does have an Exclude and draws into a Phyrexian Slayer. Maher keeps up the pressure with a Scorching Lava, only to be completely stopped in his tracks by an Alloy Golem. Bob does soon draw the Shivan Wurm again, and Boileau is clearly upset. After drawing his frown turns to a smile, as he casts Agonizing Demise on the Wurm. Bob draws a Gaea's Might which allows him to kill the Alloy Golem, and also casts a Demise of his own thanks to a Quirion Elf, killing a newly summoned Aurora Griffin. Bob has no cards left in his hand, while Louis has a few, but Bob has three creatures and Louis has none. Louis is forced to chump block with a Tidal Visionary. Bob draws a Slingshot Goblin, which Louis Recoils. In response, Maher uses his last card in hand, a Zap. He draws off the Zap and says "Yep, you got the Goblin," putting it in the graveyard. Louis also summons a Shoreline Raider to hold off the Horned Kavu that has been beating him down. On Bob's next turn he reveals that he had drawn another Goblin off the Zap, earning a laugh from the crowd. Louis can't deal with the Goblin and is forced to concede to Bob's four creatures on the next turn.