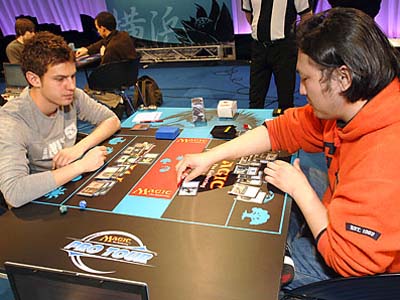 Sebastian Thaler of Germany and Kazuya Mitamura of Japan meet in both players' first Sunday appearance.

n the Top 8 of Yokohama, there were only two players not to have seen Pro Tour Sunday play before-though neither is any slouch at Magic. Sebastian Thaler was the Rookie of the Year last season, and lost out on a Top 8 slot in Geneva by only a single win. His opponent, Kazuya Mitamura was also a rising star of the 2006 season, having started at the same Pro Tour as Sebastian, PT-Prague. He managed a Top 8 in Charleston, which was also Block Constructed, so clearly these small-card-pool Constructed events are something of a specialty for him.

Each player took a single mulligan, and while Thaler had the first play of the game in suspending Search for Tomorrow, it was Mitamura who got in for damage first, with Shadowmage Infiltrator drawing him a card along the way.

Initially, Thaler contented himself with building an impressive mana base. On turn three he played Weatherseed Totem, and used it to suspend a second Search for Tomorrow. While Mitamura had another morph, when Thaler finally committed a creature to the board, the 2006 Rookie of the Year's Spectral Force towered in size against the Japanese team.

Mitamura attacked with both his creatures, threatening a Vesuvan Shapeshifter, or possibly a post-combat Wrath. It turned out that he had the Shapeshifter, and when Thaler blocked, he lost his 8/8 to an identical copy. Mitamura played a Prismatic Lens and passed.

Thaler's next turn saw one Search for Tomorrow come off suspension, and another played directly from hand. He then used Avalanche riders to cut off Mitamura's one storage land, and beat in. The life totals were 18 to 17 in favour of Japan.

Mitamura had a second Shadowmage Infiltrator to speed his clock and refill his hand, while Thaler's dropped to nothing upon him playing another Spectral Force, after not paying the echo on his Riders.

For his turn, after attacking for 2 points of damage, and 2 cards, Mitamura had a Careful Consideration and another morph, tapping out completely. Whatever Thaler topdecked, he would be able to cast without worries of countermagic, but his most immediate concern would be that he was facing an opponent with a full grip, reliant on whatever was on top of his deck each turn.

After a little thought, Thaler activated his Weatherseed Totem and made some big swings, taking Mitamura to 5. The totem seemed a powerful addition to his deck, both accelerating his mana and, on occasions like this, being a powerful clock.

Mitamura was not to be outdone, though. He swung back with his team, and before damage showed his morph to be a Brine Elemental, meaning that the attack took Thaler to 8 and left him without much mana in his "big mana" deck.

The following turn, in the face of insurmountable board pressure, Thaler scooped it up.

While sideboarding for the second game, Mitamura noted that he was lucky to be playing first in the matchup, as things change quite decisively post boarding. Thaler had been getting great use out of Aeon Chronicler from his sideboard against control all weekend, and it seemed likely that this would be his plan on Sunday too.

Both players kept and led with a Terramorphic Expanse. Thaler's meant that his mana was fixed for a turn 2 Wall of Roots, which in turn allowed him to suspend Search for Tomorrow. Mitamura's acceleration of choice was Prismatic Lens. When Thaler had nothing for the following turn, Mitamura could only be heard to quietly murmur "Lucky…" 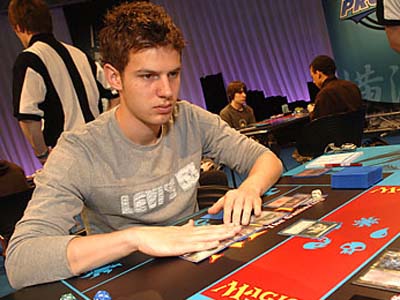 Winning may prove to be a tall order for Thaler.

The following turn, his Search for Tomorrow did find the Mountain that enabled Avalanche Riders to start doing their work. There was limited possibility of them being able to hurt Mitamura too badly, as he had three copies of Prismatic Lens, but even a small stumble would give him more time to beat in. Mitamura played a storage land, and a Careful Consideration before passing.

The new storage land got targeted in short order by Mwonvuli Acid-Moss, only for the spell to be Canceled. A Void the following turn got hit by Draining Whelk, and suddenly Thaler was facing a considerable threat. Mitamura pressed his advantage with the huge Illusion and played a morph to go with it. Thaler had another Void. Again there was a Cancel from Mitamura.

Thaler had another Avalanche Riders, but Mitamura was ready with Willbender to keep his own lands safe, while removing Thaler's only Swamp. He took attacks that knocked him down to 8 and made a return swing to put Thaler on just 2.

After drawing his card for the turn, Thaler scooped it up. Mitamura reflected on how he had countered his opponent's land destruction by drawing many lands, with a small smile. He was just one game off a Semifinals slot.

On the play again, Thaler looked at his opening seven, saw no acceleration, and rather more lands than might be ideal. This was not a keeper. Mitamura's was also not good enough, and he briskly reshuffled his deck in the hopes that one card less would bring him the hand for that one more win.

Thaler had a turn-one suspended Search for Tomorrow, which allowed for a devastating turn-three Mwonvuli Acid-Moss to destroy Mitamura's Dreadship Reef. This left only a lone Island for the Pro Tour-Charleston Top 8er compared with a full 5 lands for Thaler.

Kazuya had another storage land for the following turn, and looked happy not to have it blown up, though slightly less so when his Shadowmage Infiltrator was killed by Strangling Soot.

When Mitamura passed the turn with five lands up, Thaler was given pause for thought. Between three Islands, a Swamp, and a Dreadship Reef with two counters on it, he could walk into all sorts of trouble if he played a big spell. If he didn't, though, then how could he win? Thaler tried an Avalanche Riders, and when it got hit by Draining Whelk, he slumped a tiny bit in his chair. Again he would face off against a dragon-sized monster. Again Mitamura had a morph to follow up.

This time though, Thaler's Void the following turn was good enough. He killed the flyer with it and saw Vesuvan Shapeshifter, Damnation and Careful Consideration in his opponent's hand. He then played a land and said go.

The card drawing spell was played the very next main phase Mitamura got, and it led to a discarded Damnation and Shadowmage Infiltrator. Thaler flashed back Strangling Soot to kill Mitamura's morph (a Vesuvan Shapeshifter), and passed. Mitamura simply played two more. Thaler had a Serrated Arrows and another land but seemed a little dejected that his only red source was still a Prismatic Lens.

Mitamura attacked and flipped up Brine Elemental and Vesuvan Shapeshifter-hitting for 10 and denying Thaler his next two untap steps.

Thaler could not fight such attacks, and he soon scooped up his cards. 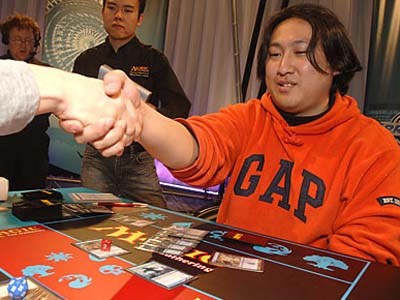 Kazuya Mitamura advances to the Semifinals!