Both players shuffled their decks quietly and pondered the matchup. Bram has been in this situation many times before and seemed quite relaxed. Even if this is Dario’s first GP top 8 he seemed to be comfortable with the pressure of the situation. 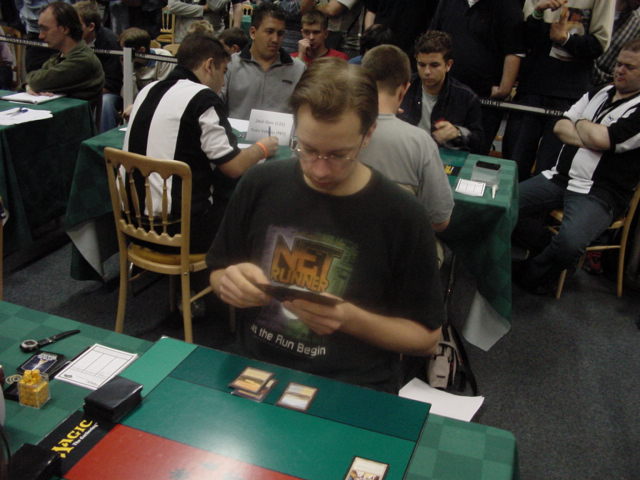 Dario won the die roll and chose to start. He wasn’t happy with his opening and chose to mulligan. The next hand wasn’t much better as he stalled on one land for a turn. He tried to keep up with Bram but as he was stuck with two islands he could only play an Aquamoeba. Bram played a turn 5 Battle Screech that would allow him to put 6 birds into play as he had speculated for a Battle Screech earlier and had two additional creatures in play. Instead of dying in a few turns to this massive air force enhanced by Divine Sacrament Dario preferred to concede.

This time both players seemed to be happy with their hands and Dario chose to start. He had a powerful start with turn 2 Wild Mongrel, turn 3 Arrogant Wurm and another Wild Mongrel turn 4. This is a start that few decks can match but this quarterfinal belonged to Bram. He played a turn 1 Spurnmage Advocate, a turn 2 Tireless Tribe. Turn 3 he played a Suntail Hawk and speculated for a Battle Screech allowing him to put two more creatures into play. Dario managed to reduce Bram to eleven life but when Bram finished his forth turn he had 12 creatures in play thanks to a second Quiet Speculation. To make things worse he also had two Prismatic Strands that would be able to protect him if something would go astray. But nothing unexpected happened and in three swift attacks Bram advanced to the semifinals.