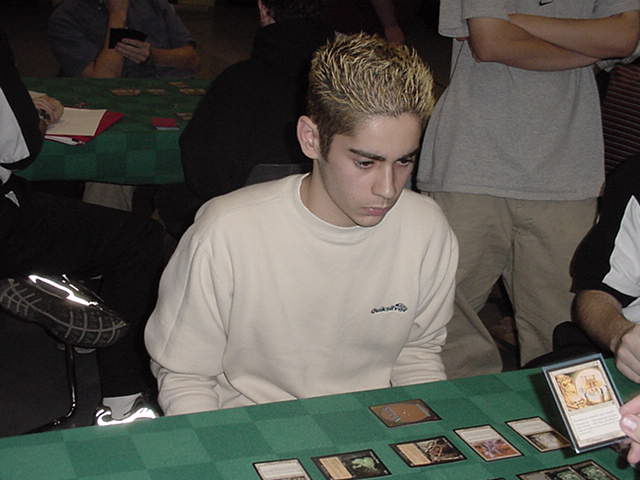 Brett has a solid W-B deck with multiple Patriarch's Desires and Auramancers. Maher has a strong W-U deck with many early drops and a couple bombs. Brett also main decked two Executes for the match which are very strong considering most of Maher's creatures are white.

Maher wins the die roll and plays first. Maher plays a turn two Mystic Visionary and its countered by a turn two Angelic Wall. On turn three Maher casts Careful Study and misses a land drop. Shears plays a Hallowed Healer on his turn and tries to capitalize on Maher's mana screw. Maher then draws two lands in a row and lays two Nomad Decoys. The board is locked up in this game by about turn five. Maher plays out a few small creatures and with the help of the decoys attacks for one with the Cephalid Scout. Shears then casts an Infected Vermin. He then prevented two damage to the Hallowed Healer with itself and changed his mind about sacking the vermin so he passed the turn with the mistake. 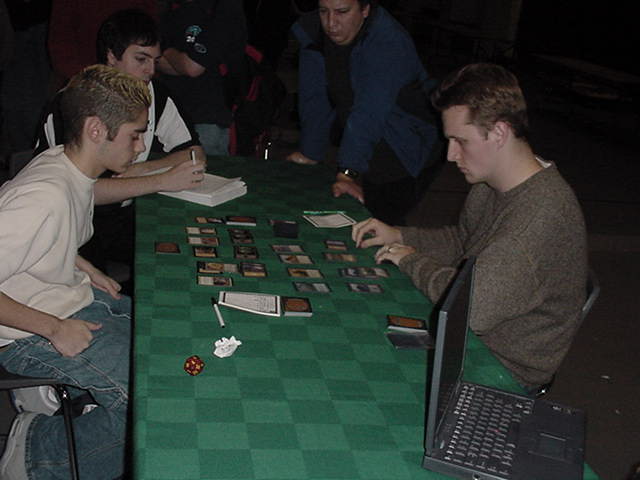 At the end of Shears next turn, Maher taps his healer and Shears makes a shield for his vermin. At the attempt to tap Shear's Aven Flock, Shears then does one damage to all creatures, killing Maher's Visionary and Cephalid Scout at the cost of his own Hallowed Healer. Maher untaps and passes his turn. Shears gets his Wererat and Flock tapped down but sends with the vermin. After Maher blocks with his Patrol Hounds Shears activates the vermin twice to kill all of Maher's creatures. Maher had just enough mana up to cast Shelter on one of his Nomads. Maher untapped and played a Mystic Zealot and a fifth land. Shears can't attack through a Zealot and played a Zombie Assassin. Maher played a second Zealot and has firm control of the game. A Hallowed Healer played by Maher gets Zombie Assassinated. Shears attacks for some damage and lays an Aven Cloudchaser. Maher plays out a Pianna, Nomad Captain and passes the turn. Both players lay creatures for the next few turns with very little else happening. Shears finally has drawn a Patriarch's Desire for the Nomad Decoy and it looks like he may be able to attack a few times. Maher surprisingly attacks with all of his creatures; the Mystic Zealot, Pianna, Nomad Captain, and Dreamwinder. Shears blocks and kills the captain and kills the Zealot with a Gallantry. Maher is in very bad shape now with Shears having a threshold powering up the Wererat and many Swamps to pump his Whispering Shade. Maher has nothing he can draw to not lose here and he concedes. 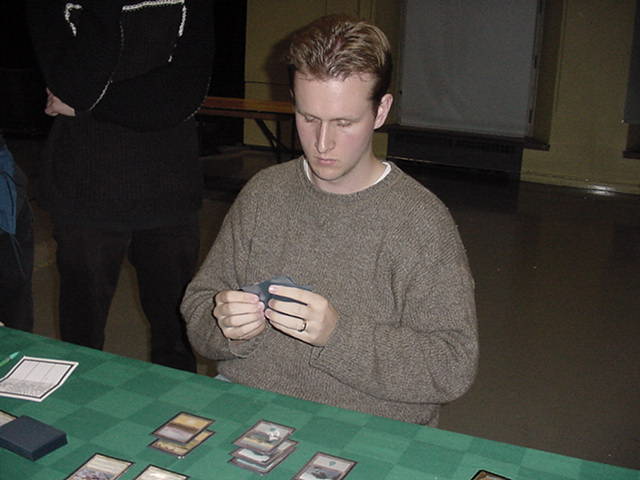 Maher elects to play as his deck has many two drops and with a quick start the deck can be very overpowering. Both players keep their hands and start laying lands over the first few turns. An Angelic Wall and Hallowed Healer shows up for Shears and a Nomad Decoy shows up for Maher just as it did in the first game. Maher plays out a few more creatures but can't attack through the healer and the wall for a little while. Maher is playing the deck very aggressively and is tapping blockers and the healer instead of offensive creatures that may be a problem. Shears Executed Maher's Zealot and then sends with Whispering Shade and Zombie Assassin. Maher has no blocks and takes a total of seven sending him to eleven life. Maher finds Kirtar's Desire to take care of the Shade and is safe for a while. Shears has some Aven Cloudchasers in his deck and if he plays one it could be huge. The next turn that is exactly what happens and Maher is back in bad shape. Maher plays the Captain and is done. The Whispering Shade comes over once again and can be as large as a 5/6 and have two damage prevented to it from the healer. Maher doesn't block and takes three damage going down to eight. Shears then Patriarch's Desires the Nomad Decoy practically taking Maher out of the match. Maher has no defense for the shade. After the Zombie Assassin takes out his Aven Flock and Execute takes out his Aven Cloudchaser, Maher has no defense at all left. An Infected Vermin seals the game for Shears.