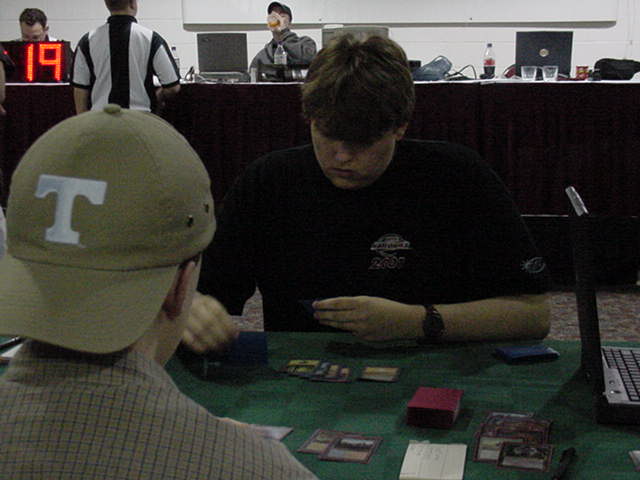 Davis was forced to take a mulligan, but his six card hand was solid, providing him with a way to obtain Domain status quickly. He started off with Lay of the Land and a Worldly Counsel. In the meantime, Wescoe summoned a Meddling Mage, naming Collective Restraint. "I love you, Chris Pikula!," he announced. Davis cast a Sunscape Familiar, preventing Mr. Pikula from dealing any damage.

Wescoe played out Goblin Trenches - not amazing at this early stage of the game, but a card that could become very useful several turns later. Davis tapped out to cast Allied Strategies for four, and Wescoe used this opportunity to summon a Lightning Angel. He finally had his opponent under a clock. Davis cast Global Ruin, leaving Wescoe with only a single Island - the rest of the lands he played so far were non-basic.

Davis was holding a Rakavolver in hand, but had no access to red mana at the moment. He spent the turn to cast Allied Strategies, drawing four more cards. He drew and cast a Chromatic Sphere, able to summon the lifegain creature so relevant in this matchup on the following turn. Wescoe used his Trenches aggressively next turn, sacrificing one of his two lands to make two creatures and attack with everyone during his own turn, bringing Davis down to nine life points. He played another land, ready to make two more 1/1 creatures at the end of next turn.

Davis spent quite a bit of time thinking about his next move. He left an Island untapped (enough to cast Evasive Action with a Familiar in play) and summoned Sabertooth Nishoba. Wescoe made more tokens and attacked with everything other than the Meddling Mage, bringing Davis down to four life points. Davis then summoned the Rakavolver with both kickers, but it was not enough. Wescoe was able to deal just enough damage by attacking with all of his creatures to win the game. Davis would have won if he summoned a Rakavolver one turn sooner - but he did not want to tap out with Evasive Action in play. Sometimes it is possible to play TOO conservatively. 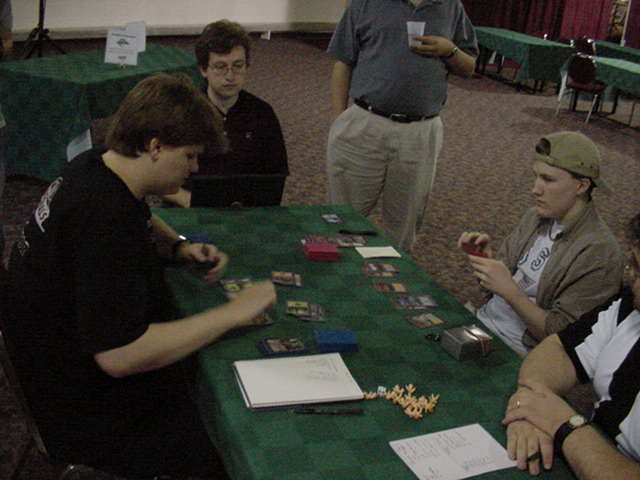 Davis opened with Sunscape Familiar and Chromatic Sphere. He kept a hand with no blue mana, but the rest of his cards were blue. Fortunately for Davis, he found an Island just in time, cycling the Sphere for blue mana and casting a Worldly Counsel. In the meantime, Wescoe summoned a pair of Goblin Legionnaires, able to get some damage past the wall. A second wall entered play, and Davis Gainsayed an attempt to cast Jilt on both of them. Things were looking good for Davis, until Wescoe played his sideboard bomb - Mask of Intolerance. Davis lost the counter war over the artifact, and it dealt three points of damage to him during the next upkeep.

Davis did have an answer though. He cast Pernicious Deed, prompting Wescoe to sacrifice the two Legionnaires in order to deal four damage to his opponent. Wescoe forced Davis to use the Deed right away by targeting it with an Aura Blast, then summoned a Lightning Angel and attacked for three. Another Deed entered play, taking out the Angel and leaving Davis at six life points.

Davis had a choice of summoning Sabertooth Nishoba or casting Global Ruin to leave Wescoe with only a single land. He opted to Ruin, which was the safer play, but it took him a few more turns to get Nishoba into play. As Wescoe was on the road to recovery, getting up to three lands, Davis drew and cast one of his sideboard cards - Benalish Emissary with kicker, destroying Wescoe's source of mana. Several attacks later, Davis tied the game score one to one.

Wescoe began the game by summoning a pair of Goblin Legionnaires. Davis, who drew Islands only, used up his Chromatic Sphere to summon a Benalish Emissary without kicker, to slow down the damage. After the Emissary blocked once, Wescoe cast Fire to get it out of the way.

Davis was fortunate enough to draw a Forest next turn. He cast Harrow and was now at the point where he could start taking advantage of his powerful cards. Wescoe was trying to make sure he would not give Davis the time to do that. Davis tapped out to cast Pernicious Deed and finally get the two creatures off the table - just what Wescoe needed as he dropped a Mask of Intolerance. Davis took three points of damage, summoned a Sunscape Familiar, and drew four cards with Allied Strategies. Down to five life, he only had the next turn to deal with the Mask.

During his upkeep, Davis put the Mask activation on the stack, and sacrificed his Plains to Harrow. He was now down to only three basic land types and did not have to take damage from the Mask that turn. Davis cast Sabertooth Nishoba, playing to try and kill Wescoe before he could draw enough burn spells. He attacked, bringing Wescoe down to nine life points, and summoned Spiritmonger. One way or another, the game would be over within the next two turns.

Wescoe cast Urza's Rage bringing Brian Davis down to two life points and hoping to draw a burn spell. He did in fact draw a Fire/Ice while holding a land and Gainsay. Wescoe got so excited about it, that he cast Fire before playing the land. He now had five lands untapped. Davis countered with Evasive Action. Wescoe cast Gainsay. Davis countered with Evasive Action again and, because Wescoe did not play a land, he did not have the three mana he would need to simply pay for the Evasive Action ability and win the game. Not laying down a land cost Wescoe hundreds of dollars, and allowed Davis to advance into the semifinals.