This match was joined in progress. Game 1 featured a bit of a beating to the dome of the Pro Tour Regular Brian Davis. Jeremy Pinter was playing his dream matchup in the Quarters with his Green White deck, and Bdavis would have to do everything he possibly could to stave off the up-and-comer's reckless charge into the next bracket of the Top 8.

Before I go any further, let me introduce the two players. Bdavis, the guy who finished in second place to Bob Maher at Tour Chicago, and a former Rookie of the Year has been on a great placement streak lately. Playing the upcoming Invitational and finishing in the top eight of Grand Prix Minneapolis, and Pro Tour Nice, is looking to solidify his career. Jeremy Pinter, on the other hand, is a bit of an unknown. Hailing from Lansing, Michigan, this player has had a taste of glory on the Pro Tour before with Team Wheat and Rye in New York. Playing the very stout choice of Green White in this Blue Green, mono black field, Pinter is looking to carve his name in the history of the Pro Tour.

Back to the Game 1 beating. When joined this game was almost all but wrapped up for Pinter. B Davis had played all of two swamps the entire game, And when an Elephant guided Spurnmage Advocate hit play, Brian's life total fell in massive chunks. Anurid Brushhopper joined the force, and when a last ditch Chainer's Edict revealed Glory and a land, Bdavis packed it in.

Davis opted to kick off the second game and after no mulligan, led off with a swamp. Pinter, keeping a shady hand with no white sources failed to draw one, and made a forest. Davis made land, passed turn and watched as Jeremy made a Plains, and a Spurnmage Advocate. Edict killed off the Mage, and Pinter returned with a Wild Mongrel and a second Advocate. Two innocent bloods cleared the board, and it was back to square one for both players.

During his next turn Jeremy decided that he hated to play land. Hated it more then anything in this world. To show how much he hated it, he did not play another one until his eighth turn. Phantom Centaurs, Glory, and several other cards rested in his land screwed hands as he drew, sighed, discarded, and passed turn. 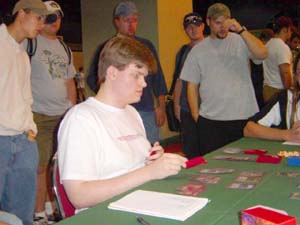 Of course, Bdavis also decided that he did not want to do anything but draw cards and discard them as well. It was clear that he was looking for part of his combo, and when a Zombie Infestation came into play, (This Infestation was of no danger, as Ray of Revilation destroyed it before it could do much damage.) it was certain that Upheaval was the card he be searching for.

During this time of searching, Jeremy realized that to win games, you have to have land. He started to draw them, and cast creatures. Arrogant Wurms came into play, and left just as quickly as they entered. Bdavis was stalled in his search for an upheaval but he eventually drew the mistake of R and D, floated the mana, cast it, and made nine little baby zombie tokens.

Pinter had no reply in his next turn, and the match went to Game 3.

Both players were silent as they shuffled their decks, and then shuffled each others decks, and shuffled some more. There was more shuffling involved in this match then in some peoples entire magic matches this weekend, and it seemed that neither wanted land screw to mess up their day. Neither player took a mulligan, and Pinter dropped a forest and passed.

Davis was intent to answer all of Jeremy's threats, and had one for his second turn mongrel, third turn brush hopper, (phased out in response.) and his fourth turn Wild Mongrel. However, he did have a huge problem on his hands.

The Brushhopper never stopped beating him down. During the end of Pinter's fifth turn, Davis announced an end of turn effect, and kinda sat there.

Babies cried, Baseball games were played, and people were starting their commute to church. Dinner Bells rang, and girls sang, and B Davis just sat there.

After thinking very hard for an even longer period time, Davis cast Cunning Wish and brought out a skeletal scrying. 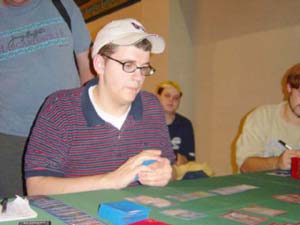 He played a land, and watched as Pinter phased out his hopper with a Glory and a Ray of Revalation. Unphased the 'hopper knocked Brian to eight, and an end of turn Skeletal Scrying (which took less time then the previous end of turn.) knocked Brian to two. Edict finally killed off the hopper, but when Spurnmage Advocates threatened to knock davis to one, Aether Bursts ended that. Circular logic finally got rid of the advocate, and things looked great for Brian.

Still at two life, he was not prepared to deal with the final threat that Jeremy had for him.

Basking Rootwalla hit the table, resolved, and was enchanted by Elephant Guide.

Bdavis had to either find a bounce spell, or two removal spells. After casting two Deep Analysis, all B Davis could do was extend the hand.