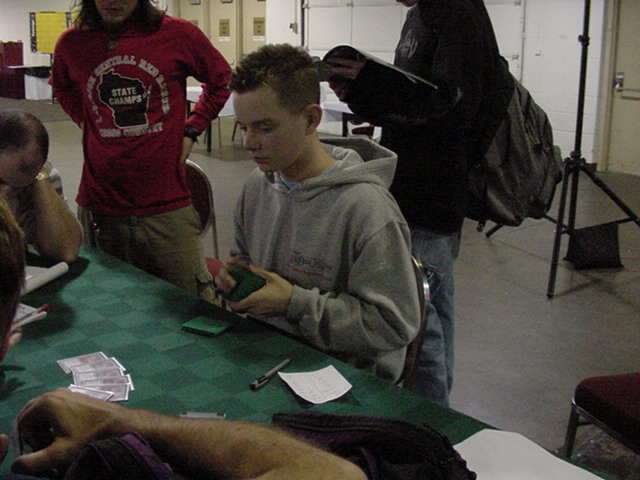 Brian Hegstad is the youngest member of Team ABU. With two recent high profile Top 8's (Grand Prix Boston and U.S. Nationals), he is on the hunt for something bigger up here in the heartland. He built his deck over the last week, turning a conventional RG into a near-liquid (plasma?) machine using Prophetic Bolts and Fire/Ice.

Jacob Janoska is a member of Cabal Rogue, and benefited greatly from the team's help in designing his B-W-u deck, a No-Mar variant using Ravenous Rats and Spectral Lynx in the early game, and Desolation Angel in the late game. Jacob has been on the Pro Tour circuit numerous times, but is also well-known for his significant contributions to the 5-color community (in fact, he was undefeated in that format until this very weekend). His middle name, this reporter has learned, is "Danger". Going into the match, it was uncertain whether the young lad from ABU would respect that title. 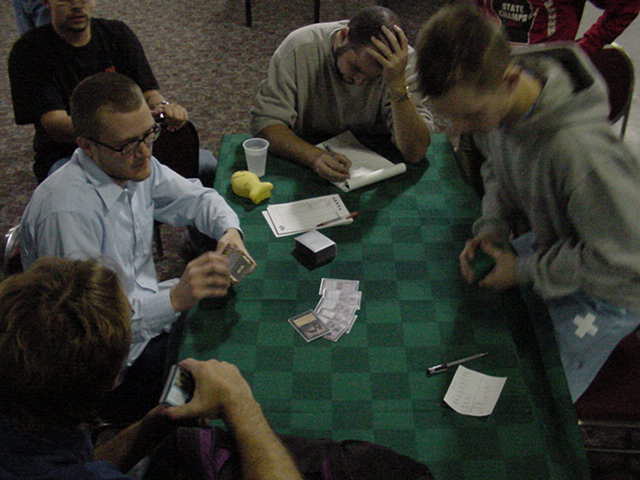 In game one, Brian began with a mulligan, which came back to haunt him as Jacob deluged him in discard: Ravenous Rats (gets Ghitu Fire, dies to a second), Gerrard's Verdict (gets the third Ghitu Fire and a Raging Kavu), and Recoil (which sent a second Raging Kavu back through Brian's empty hand). In fact, a turn five Ravenous Rats found nothing to eat, and looked not a little disappointed. (Or maybe it was just embarrassed to be in the Starter set.)

Unfortunately for "Discard Danger", his opponent's Blurred Mongoose was already out by turn two, and the furry little annoyance pretty much went the distance. Brian top-decked with enough force (Thornscape Familiar, yet another Raging Kavu) to punch through the remaining Rat and bring Jacob down to 7 as the ninth turn ended.

At the end of Brian's tenth turn and at 5 life, Jacob played Fact or Fiction, desperately seeking a business card of his own that could complete the momentum swing. Faced with a Ravenous Rats, Vindicate, Gerrard's Verdict, Dromar's Cavern, and Plains, Brian asked "Rats or no?" Jacob said no, and then on his own turn made what some observers (and Jacob himself) later admitted was a mistake: he targeted his opponent with the Verdict, instead of himself (with two lands in hand from the Fact or Fiction). But in Jacob's own words, "I didn't need life; I needed a business spell anyway." In any case, Brian played Urza's Rage in response, and facing down the 2-power rodent, Jacob suggested moving on to the next game.

Both players had sideboard strategies ready for the other's deck. Brian pulled out his Rat-vulnerable Familiars and Raging Kavu for Dodecapods and Jade Leeches. Jacob pulled out his Recoils, his Agenda, and a Fact or Fiction to pick up four Hobbles and another single copy of Desolation Angel and Rout. 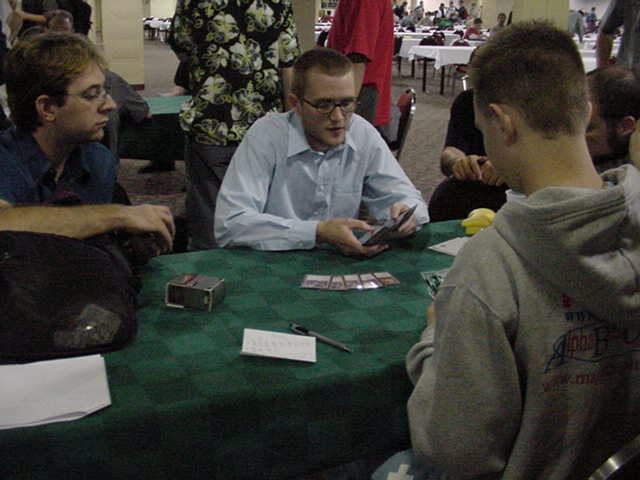 The second game saw even more early discard than the first. Going first, Jacob lit off three Gerrard's Verdicts within the first five turns, forcing Brian to ditch two Urza's Rages, a Prophetic Bolt, a Yavimaya Coast, a Jade Leech, and a Skizzik...

...but the turn two Blurred Mongoose was already out, again, and kept pecking at Jacob's life total. It was joined by another Mongoose on turn four, and while one fell to a Ravenous Rats (which also pinched a Prophetic Bolt), the other was relentless. An unkicked Skizzik briefly joined the rodent, and by the start of his tenth turn, Jacob was at 7 life.

Then the Spectral Lynx came out.

At this point, the story is supposed to change. The Lynx buys time for the Rout, or even goes aggro for a turn or two as Desolation Angel comes screaming out like a horrific omen of death.

But Jacob was stuck with Hobbles and lands in his hand, and there was nothing else to do. Brian found a Prophetic Bolt, and took down Jacob to 3 while finding an Urza's Rage. He waited one turn for an opportune moment (i.e., not enough Dromar's Charm mana) to burn Jacob out.

As this was the last match your intrepid Day Two reporter will cover, he would like to thank Sideboard readers for tracking Magic events in his tiny corner of the world. It was nice having so many good people in town, especially given current events.

And now, my flying monkeys...off to the Mall of America! Or to a 2x2 draft with Kurt Hahn, whichever.