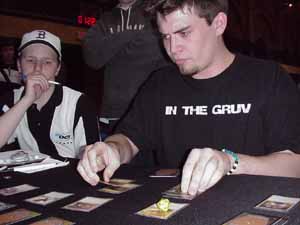 This is a situation most unfortunate. Prior to this event, these two teammates have never played each other at a Grand Prix or Pro Tour level event. They even managed to make their way to the top of the Day One standings avoiding one another on the way. Boy did that change on Day Two. Since the rise of today’s sun, these two players have already met twice in the Swiss rounds, in two different drafts. Rubin holds the match score at 2-0, defeating Kibler in an ironic turn of events with a “Name, the Something” legend in their first encounter, and losing by the skin of his teeth when a last ditch Erratic Explosion hit Vitality Charm instead of the Treespring Lorian or Krosan Tusker that lay directly beneath.

Now they meet for the third time today; in the Grand Prix; lifetime; whatever. One thing is for certain- each player has just about had enough of playing the other at this level for today.

A coin flip let Kibler play first, and after the handshake, it was down to business. Kibler with white-black, rubin with black-green. Both players had turn two plays- Catapult Squad for Kibler, Wirewood Elf for Rubin. Sadly, Rubin’s Elf brought out chuckles from the crowd (“Who’s laughing at me?”), especially when he didn’t have anything to accelerate into on his third turn. Wirewood Elf went in for one. At least Rubin had the creature that everybody is familiar with by now to play on turn three. Rubin’s morph convinced the Catapult Squad to hold back. Kibler passed the turn, cycling a Gempalm Avenger on Rubin’s end step before playing out a Daru Stinger, amplified four times, revealing more gas.

Rubin’s next few plays weren’t nearly as impressive- Super Secret Agent #2 and Super Secret Agent #3. Kibler, content to sit back on defense while his airborne soldiers take to the skies, began to build said air force, leading with the Wingbeat Warrior. Rubin ‘accelerated’ into a Krosan Groundshaker, and followed that with a Nantuko Husk. Since the Daru Stinger and Catapult Squad could take out the Groundshaker, the beast held back. Kibler then revealed his morph- Whipcorder. The pieces were in place; Rubin’s board was just about locked down.

Fortunately, Rubin held the answer to Kibler’s shenanigans with a morph (Skinthinner). All that was needed was the opportune moment to go for the kill. Eventually contenting himself by just attacking for two with the Warrior, Kibler passed. Skinthinner took out the Stinger. Now it looked like this might just be a 3-0 lifetime record for Superman. Taunting Elf was played for extra insurance, but Rubin swung anyway. His attacking force consisted of the Nantuko Husk, the Krosan Groundshaker, the Skinthinner and his three special secret agents. Catapult Squad and Whipcorder made an attempt to kill the first morph, which Rubin sacrificed to the Husk. Kibler flipped over his morph to reveal his own Skinthinner. Said Skinthinner then stood in front of a huge Husk. 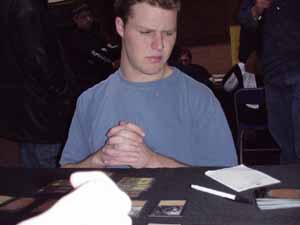 With the immediate problem out of the way, Kibler went to mass his troops with Gustcloak Sentinel and Glory Seeker. Rubin just made his fourth morph of the game. The game had reached a standstill, and neither player wanted to move, despite the fact that Kibler held the air superiority by a count of two to none with a Dive Bomber still in his hand. Instead, Kibler went to lock up both of Rubin’s major threats with a second Whipcorder. It was now or never. Rubin declared war. Kibler’s Whipcorder put the stops on the Husk, and now it was Rubin’s turn to lapse into deep thought.

The calculations that a player may go through during the course of a single game, let alone an entire match may be astounding. While nowhere as numerous as the six billion or so iterations of a chessboard within the first six moves, it was enough to take up at least a few minutes of consideration. Besides, neither player seemed to be in a hurry, even if I was. In the end, Rubin settled upon Primal Boosting his Taunting Elf, and sending in the team. Before blockers were declared, Kibler used the Catapult Squads to tap his soldiers, saving them from the insolence of a foul-mouthed Elf on steroids. In the end, Rubin lost a considerable amount of his forces, while Kibler still held the two Whipcorders and three fliers to none.

Despite that, he still sure took his time about things. Or not. He tapped eight, revealed Akroma, Angel of Ungodly-Savage Beatings and turned way too many cards sideways. Rubin packed it in. Kibler smiled at the sight of a card templated along “Someone, Really Intimidating Title” on the right side of the table.

A mulligan for Kibler did nothing to help stave off Rubin’s savage opening of Elvish Warrior, morph. Kibler’s fourth turn Glory Seeker met with much ridicule, and one can only imagine his disappointment when it traded with Rubin’s morph, only to reveal Birchlore Rangers. The game was pretty boring from here on, with neither player holding anything in terms of action, except for the Elvish Warrior that kept swinging. Things took a drastic turn when Rubin hit land #6 and revealed his own snazzy legend- ‘Kamahl, He-of-the-Way-Too-Large Fist’. Next turn, an animated land and an Overrun convinced Kibler to concede. Compared to the first game, this game went by like light-en-ning.

Given that both games were decided by some card with the words “Creature- Legend” somewhere on its card face betrayed the fact that this is a game where skill plays a large role. Seriously! Granted, big burly men (or women) do have a way of turning entire games around, but this was starting to get a little ridiculous. Money is on the table to see who draws his legend first.

Taunting Elf wasn’t exactly the most exciting nor Threatening of openings from Rubin, but at least it was better than the emptiness that filled Kibler’s side of the board. White Knight on turn three was a nice addition to the table, followed by a triple-amplified Daru Stinger. Things could get interesting, considering that Rubin held Cruel Revival in his hand, and more importantly- he had since drawn Kamahl. Now, if he could just live long enough to make it matter. Kibler upped the stakes with Whipcorder and Wingbeat Warrior. Rubin didn’t wait for him to untap before killing the Stinger with Cruel Revival, returning the Cadaver. Kamahl hit the table on turn six, but things were slipping away. Kibler’s own Cruel Revival was the nail in the coffin, and Kibler’s long-awaited victory was now assured. Still, if it’s any consolation, Rubin still has the overall win, ousting Kibler 2-1 in matches.