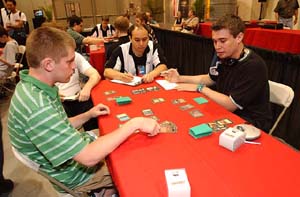 Brian Kibler is an established name on the Pro Tour. Ever since his Dragon-themed comeback to tournament Magic at Pro Tour: Chicago, Kibler has been a staple on the list of the money finishes. This weekend treated him particularly well. Kibler made it into the Top 8 with three rounds to go, and had the luxury of conceding to his friends Finkel and Reeves to assure their spots in the Top 8, before drawing the last round. All of this manipulation however placed him in the unfortunate position of having to face Josh Wagener in the first round.

Wagener entered the competitive Magic scene with a third place finish in Junior Super Series a few years ago and recently followed it up with a top 8 finish at Grand Prix: Boston. To date, he has never played on the Pro Tour. However, it is Wagener, not Kibler who is a strong favorite in the matchup. Wagener is playing a fairly standard red-green aggro deck. The only major difference is that his version is running Reckless Charge over Elephant Guide – a choice Wagener came to regret throughout the tournament. Still, it is an awesome matchup against Kibler's mono-black Zombies deck.

Kibler led off with Cabal Therapy, naming a Phantom Centaur right away. Although Wagener was at least three turns away from being able to cast one, Kibler simply could not afford to name something else as the Centaur is truly a nightmare card for him in the matchup. Therapy missed, and Wagener summoned a Wild Mongrel on the following turn. Kibler removed it with a Smother.

Wagener's next threat was a Call of the Herd. Kibler summoned Withered Wretch and used his third land to remove Call from the grave, denying Wagener the ability to flash it back. Firebolt took out the Zombie Cleric and a second Wild Mongrel came into play. Stuck on three lands, Kibler had no way to answer these threats. He cast Duress and chose a Violent Eruption, leaving his opponent with a pair of Reckless Charges in hand. Generally not a card Wagener wants in the matchup, it was perfect in this situation, allowing Wagener to deal damage to Kibler extremely quickly and capitalize fully on the mono-black mage's mana problems.

Kibler fought back for a few turns, able to block with Rotlung Reanimator, then it's Zombie token and a Stronghold Assassin – but his life total was consistently going down. Kibler stabilized the board a three life with Wagener having no cards in hand, but Wagener top-decked a Violent Eruption on the very next turn to end the game.

Once again, Kibler fired off a first turn Duress, taking out a Volcanic Hammer over Firebolt. He then Smothered a Grim Lavamancer and Duressed out a second Firebolt, leaving Wagener with three lands in hand and a Basking Rootwalla in play. 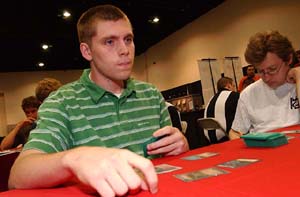 Wagener top-decked a Call of the Herd to play next turn, while Kibler missed a third land drop. Just in time, Kibler drew a third land and cast Withered Wretch, removing Call from the game. Wagener drew and cast Compost, then drew Violent Eruption on the very next turn able to kill both Kibler's Withered Wretch and Nantuko Shade, and draw two cards in the bargain. Kibler was unable to deal with such card economy and fell to another Elephant token and Basking Rootwalla several turns later.

Wagener was forced to accept a double mulligan. His five-card hand was excellent – but it was still a five-card hand. Kibler took out a Volcanic Hammer with yet another turn-one Duress. Wagener cast Llanowar Elves and Grim Lavamancer, while Kibler summoned a Withered Wretch.

With just one card in his graveyard, Wagener attacked with Llanowar Elves into an untapped Wretch. Kibler accepted the trade. He blocked, and had Wagener remove both cards from his graveyard to finish off the Wretch via Lavamancer. Yet again, Kibler missed a fourth land drop for several turns, giving his opponent an opportunity to somewhat recover from the mulligan.

For the first time in three games, Kibler played his fourth land, finally able to summon a Graveborn Muse. Wagener did not like the concept of letting Kibler draw cards and killed it off with a Violent Eruption. Kibler got the Muse back via Unholy Grotto played it, and met with a second Eruption. Kibler then took the time out to Butcher an Elephant token and then Mutilate the board a few turns later.

It looked pretty scary for Kibler when his opponent finally got a Phantom Centaur into play. Kibler used a Corrupt to kill off Llanowar Elves and buy some time. Fortunately for him, Wagener did not draw another creature and Kibler was able to Edict away the Centaur.

For the third time, Kibler summoned his Graveborn Muse. Wagener was holding two burn spells in hand. He cast Firebolt twice, and attacked with a Mongrel, bringing Kibler down to four life points. With Graveborn Muse in play, he would be able to finish the game next turn with a Volcanic Hammer – except Kibler brought his life total back with another Corrupt, simultaneously removing Wild Mongrel. 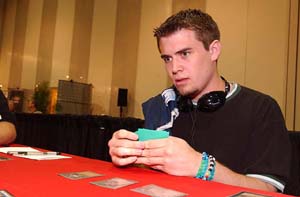 Graveborn Muse was joined by Withered Wretch. Kibler attacked a couple of times and sealed the deal with a final Corrupt to the face.

Wagener opened with a Llanowar Elves. Kibler Duressed on turn one as is his fashion, choosing Call of the Herd over three burn spells. He then Smothered a Wild Mongrel and cast second Duress and double Cabal Therapy to eliminate the rest of his opponent's hand. Meantime, Wagener flashed back his Call.

Wagener top-decked Call of the Herd and Compost in a row, while Kibler was able to play out a pair of Withered Wretches and remove the Call from the grave. He used Edict to take out Grim Lavamancer, and had to double block one of the two Elephant tokens in play, allowing Wagener to draw an extra card.

Kibler was sitting on five Swamps and two Corrupts in hand. Had he drawn two lands in a row, he would have won the game as Wagener was at thirteen. However, he failed to draw a land and Wagener finished him off with Violent Eruption.

"The matchup is really not as bad as people think," Kibler commented later. "It's actually slightly in my advantage after sideboarding." Not with these draws.