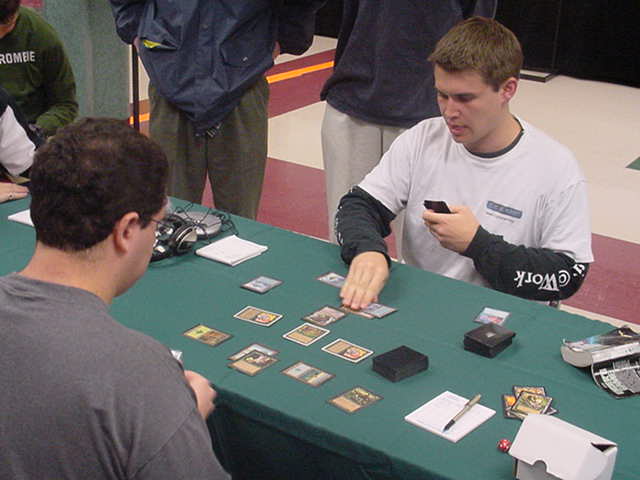 This match featured two Pro Tour veterans, both with numerous Pro Tour and Grand Prix accomplishments. Brian Kibler made top 8 at Pro Tour - Chicago 2000, which was also a Standard constructed tournament, and he was the winner of Grand Prix - Toronto, a a Mirage block constructed tournament. Brian Kibler is reknowned for his deckbuilding skills, coming up with inventive decks which are oftentimes successful. In this tournament, he chose to play a version of Psychatog that was tuned to beat the mirror-match, with Memory Lapses and Probes instead of Standstills and Aether Bursts. It had served him well so far, getting him to a 4th place finish after the rounds of swiss. Mike Turian, with a top 8 at the 2000 World Championships, a 1st place finish at Pro Tour - New York, a team event, and a 1st place finish at Grand Prix - Montreal, has proven himself to be an expert Magic player. He has attended more Pro Tours than almost any other Magic player in the world and he has accumulated an impressive series of perfomances. After the rounds of swiss, Mike Turian found himself in 5th place using a Blue/Green/Red Squirrel's Nest/Opposition deck of his own design.

The last time these Magic titans met in the top 8 of a Grand Prix was at Grand Prix - Toronto in 1997, where Brian Kibler defeated Mike Turian in the quarterfinals and went on to win the tournament. The spectators were interested to see if history would repeat itself or if Mike Turian would emerge the victor. 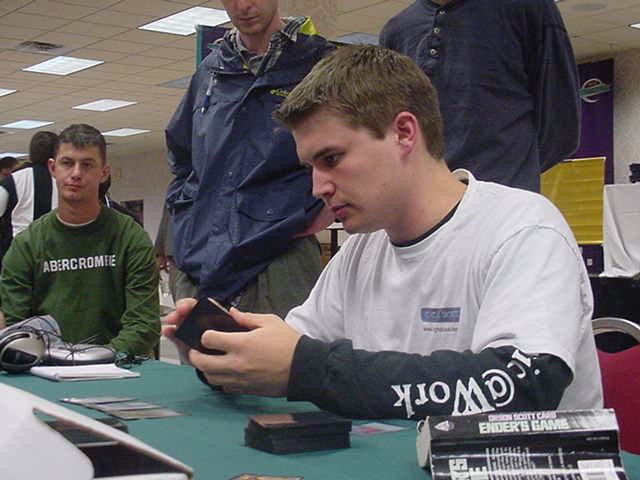 Mike Turian won the die roll and chose to play first. Mike managed to get a Merfolk Looter on the board before Brian Kibler could get counterspell mana up, but the next two spells, a Wild Mongrel and a Merfolk Looter, were stopped by Kibler's countermagic. On Mike Turian's fifth turn he cast Squirrel Nest on one of his lands and Kibler had no way to stop it. Meanwhile, Kibler had four islands in play and cast Fact or Fiction in search of black mana sources. Kibler found a Darkwater Catacombs and a Salt Marsh and he began getting his Nightscape Familiars in play, although without the mana to regenerate them, Kibler was forced to take a few beats from Turian's squirrels.

As Turian continued to accumulate squirrels, Kibler was forced to make his move. Brian Kibler cast Probe with the kicker on his turn and Mike Turian had a few responses. First, he activated his Merfolk Looter, with which he drew a Fire/Ice and discarded a Circular Logic. At this point, Mike Turian had to put the madness trigger of Circular Logic on the stack; when that trigger resolved, he would have to decide whether to simply put it in the graveyard or cast the Circular Logic on the Probe. In response to the madness trigger, Mike Turian cast Fire/Ice to deal one point each to Kibler's two Nightscape Familiars. Kibler was in trouble. He cast Fact or Fiction in response and failed to find what he was looking for. The Fire/Ice ended up killing both of the Familiars and the Circular Logic countered the Probe. Kibler had one last hope of getting out of this alive: Upheaval. Unfortunately, Mike Turian had a Circular Logic ready for it and he followed that up with an Opposition on his next turn, locking Brian Kibler down and forcing a confession. 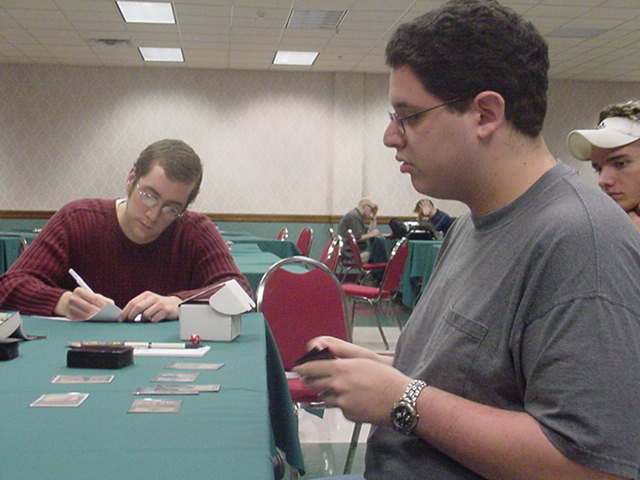 Mike Turian sideboarded out some Flametongue Kavus and Call of the Herds for Static Orb and Gainsay, while Brian Kibler brought in Gainsays and Ghastly Demises for his Probes and a two of his Circular Logics.

Brian Kibler played first, so he was able to Counterspell Mike Turian's second turn Wild Mongrel. Unfortunately for Brian however, he had no counter for Turian's third turn Squirrel's Nest. Mike Turian followed that up with a second Squirrel's Nest and a Merfolk Looter, then a third Squirrel's Nest which got countered, and finally a fourth Squirrel's Nest that reached play. With three Squirrel's Nests in play on Turian's side of the table, Kibler was under a great deal of pressure. He cast two Psychatogs and a Nightscape Familiar to eat up some attacking squirrels, but Turian continued to get the damage through. Despite forgetting to make squirrels at the end of one turn in which his Merfolk Looter got killed by a Ghastly Demise, Turian was poised for the kill. Despite a Fact or Fiction and an Opt, Brian Kibler failed to find the Upheaval that he desperately needed to recover and he lost the game and the match.