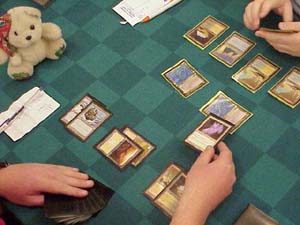 Each player was off to a rocky start at the beginning of the first game. Parker was forced to miss a land drop on turn three - and his first two lands were Coastal Towers which prevented him from summoning an early creature. Rodriguez had plenty of lands, but was missing black mana - thus unable to cast his Gerrard's Verdict and Vindicate early on. The two players traded Galina's Knights early on instead. Parker went on to summon a second and then a third Galina's Knight. Rodriguez was holding a hand full of black cards and could not stop the threats.

Having finally drawn a source of black mana, Rodriguez cast Fact or Fiction at the end of Parker's turn. Parker was holding an Absorb but chose to let Fact or Fiction resolve since he would be unable to counter the next spell if he stopped this instant. Rodriguez revealed Spectral Lynx, Rout, Vindicate and a pair of Dromar's Charms - all excellent cards at the moment. Parker was forced to think hard, and finally separated the piles, letting his opponent have Rout, Lynx, and Vindicate. Although the situation would have been grim for Rodriguez had he not drawn Caves of Koilos, this Fact or Fiction seemed to have turn the tide of the game in favor of the local player.

Rodriguez chose to summon the Lynx rather than risk tapping out for the Rout. Parker cast an Exclude and Rodriguez countered with Dromar's Charm. Since Rodriguez had plenty of lands now, Parker could do no better than cycle a Disrupt - but he also made his opponent tap his last land to pay for it, thus able to attack for four next turn. Rodriguez took the damage, preferring to go down to nine life points rather than trade away a Lynx for a Knight. Parker ended his turn by summoning a Lynx of his own and laying a land - having three lands untapped seems to be one of the most important strategic advantages in this format.

The Chilean player summoned Galina's Knight, then cast Gerrard's Verdict. Parker's hand consisted of Absorb, land, Repulse. He had no option but to try and counter the Verdict, which succeeded despite three untapped lands on the other side of the table. Parker cast Repulse on his own turn, unsummoning Galina's Knight (Rodriguez did not have the mana to regenerate Lynx) and attacked with three creatures. When Rodriguez attempted to trade off the two Lynx in combat, Parker had the option of either regenerating his own Lynx, Repulsing it back to his hand, or allowing it to die in order to keep three mana untapped. He opted for the latter.

Rodriguez started his next turn with Gerrard's Verdict, forcing Parker to tap out and counter it. He was then able to cast a problem-free Rout. Although he was now down to three life points, he was once again at an advantage, as Parker ran out of threats. Parker dug ever-deeper into his library by Repulsing the opposing Galina's Knight, but the card advantage obtained via Fact or Fiction was now coming into play. Rodriguez Vindicated his opponent's Galina's Knight, and then his Stormscape Apprentice, while still holding plenty of cards in hand. Parker finally drew a card that could present a problem to his opponent - Voice of All. He named black, forcing Rodriguez to cast Rout, destroying his own Galina's Knight in the process.

With Parker down to zero cards in hand, Rodriguez summoned Desolation Angel with kicker, destroying the many lands both players had in play. Several turns later the game was over, Rodriguez making a comeback from over a twenty point life difference. 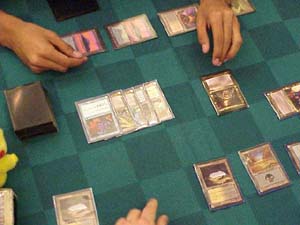 Parker's opening hand in game two consisted of six spells and a single land, so he had no qualms about throwing it away. His six-card hand also contained only a single land, so the decision was a lot more difficult. Parker opted to draw five cards. Three lands, Exclude, and Voice of All was perfect for a five-card hand, so Parker kept it. Rodriguez kept his one land hand on the strength of going second and the two Opts he was holding.

Rodriguez pressed the card advantage with a turn three Gerrard's Verdict, leaving Parker with a single card in his hand - Voice of All. Parker would now need to draw extremely well in order to have a chance of winning this game. He drew and summoned Meddling Mage, preventing his opponent from playing Vindicate. His next draw was Plains, so he was able to summon Voice of All as well. Meanwhile, Rodriguez had plenty of library manipulation and card drawing in his hand. He cast a barrage of Opts and a Fact or Fiction. Parker kept drawing very well though, finding another Meddling Mage to lock out Dromar's Charm. Amazingly the game was stabilized with Rodriguez having two Lynx and a Galina's Knight in play while Parker sported Voice of All, a pair of Meddling Mages and Stormscape Apprentice.

Despite being four cards down, Parker kept the pressure on with his creatures, used the Stormscape Apprentice carefully and, managed to actually win the complicated damage race! The watching Americans - Williams, Maher and Jensen were ecstatic. Jensen reached over the barrier to hi-five Parker. He also demanded that a shout-out to The List (his team) be included in this report. So there. 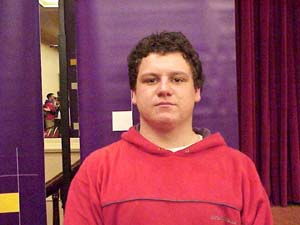 Once again, Parker missed his third land drop. He was able to summon a Stormscape Apprentice, but his opponent matched with Meddling Mage (naming Meddling Mage). He then summoned Spectral Lynx, which was Vindicated. Finally, he played a second Apprentice and was out of cards he could cast for two mana. In the meantime, Rodriguez was attacking with his Meddling Mage and cast a Fact or Fiction, obtaining another Vindicate and Gerrard's Verdict. He used the Vindicate to bring Parker down to one land - only a turn before Parker finally drew another Island.

Gerrard's Verdict took out Absorb and Exclude. Spectral Lynx came into play and Rodriguez still had the mana to cast an Opt. Parker still failed to draw a third land. Rodriguez cast Opt, got a Meddling Mage out of it and attempted to cast it. He forgot that the Meddling Mage he has in play is naming Meddling Mage! He was forced to take a point of mana burn, reveal a card in his hand, and end up with a dead card for his mistake.

Having finally drawn a third land, Parker cast Repulse, bouncing Meddling Mage back to his opponent's hand. A play that was risky. Rodriguez had only one source of blue mana. Had he drawn a second, he'd be able to cast both of his Mages. Rodriguez did not draw an Island right then, and he named Meddling Mage again - though I am not quite sure why. Either way, it was not likely to matter. Parker still could not cast what was left of his hand after several Gerrard's Verdicts, Rodriguez was ahead in the damage race, and he was holding Dromar's Charm.

Two Apprentices traded in combat for Meddling Mage, so Rodriguez summoned the next one, naming Repulse this time. Dromar's Charm took out the next Apprentice Parker summoned and the game was over. Parker did his best provided the terrible draws his deck offered him, but was unable to advance beyond the Top 8.