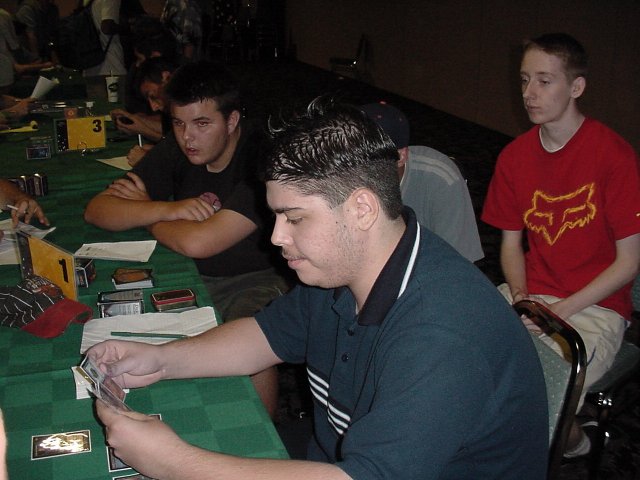 After pulling off a miracle to pass David Price on tiebreakers and make the top eight following his intentional draw, the quarterfinals matched Brock Parker's Solution deck against the deck that scared its original creators the most in playtesting: Sammy Batarseh's Blue/Red/Black control, strengthed by Apocalypse's duallands and Fire and Ice. Our answer to the matchup, Pure Reflection, is missing from Brock's sideboard. The matchup proceeded as it usually does. Brock put out a first turn Stormscape Apprentice, a second turn Meddling Mage on Fire and Ice and a third turn Galina's Knight. All Sammy Batarseh could do in the meantime was put out a second turn Nightscape Familiar, but that was basically the plan for his deck, especially since he got to play all three basic land types out. Brock tapped the Familiar with Stormscape Apprentice to go in with his other two creatures, but Batarseh used Urza's Rage to kill off the Meddling Mage and only took two damage down to fourteen.

Batarseh next tried to put out a second Nightscape Familiar, which Brock decided was important enough to Absorb. The Stormscape Apprentice joined the Meddling Mage in the graveyard after another Urza's Rage, and it was quickly replaced by a Voice of All naming red. A Void killed off the Voice and showed that Brock had only an Absorb in his hand, but he topdecked another Voice of All. The Voice did a steady two points of damage a turn to Batarseh while the Familiar held off the Galina's Knight. Finally when he was at four life, he could wait no longer and cast Fact or Fiction and Undermined Brock's Absorb. The other Void was in the five cards along with two Urza's Rage, Fact or Fiction and Ghitu Fire. Brock decided to give him Urza's Rage with his Void, and the Nightscape Familiar had to die blocking without the mana to regenerate or the life points to take two damage. Without the Familiar, the Galina's Knight finished the Voice's work.

Brock decided to sideboard out one Repulse, four Spectral Lynx and three Exclude for three Crimson Acolyte, the fourth Stormscape Apprentice and four Gainsay. Keeping in three copies of Repulse over Spectral Lynx looks odd, but it makes some sense since the Lynxes would leave him overly vulnerable to Fire and Ice and Repulse can be used to bounce the Familiars to buy significant time. Still, he had clearly sacrificed his ideal setup in this matchup for others he considered more important. Batarseh decided to sideboard out his two Excludes, all three Repulse and both Ghitu Fire to bring in two Lobotomy, two Pyre Zombie and three Gainsay. Brock mulliganed to start game two. 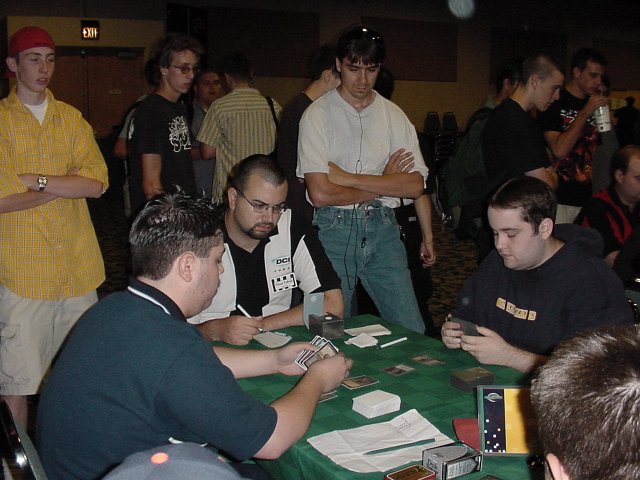 Game two started with another second turn Familiar for Batarseh, while Brock again played a Stormscape Apprentice on turn one and followed up with a Galina's Knight. On his third turn he put out a second Apprentice, and Fire killed off both of them. Brock tried to get a few points in and buy a little time with a Repulse on Nightscape Familiar, an opening Batarseh used to cast a Prophetic Bolt to Brock's head. Brock then had an opening to cast Fact or Fiction, which revealed the disappointing two Islands, Coastal Tower, Meddling Mage and Crimson Acolyte. He ended up with the Acolyte and the Coastal Tower, which didn't come down because Brock had played an Island first. The Fact or Fiction in turn let Batarseh come back with a Lobotomy, which took out a second Fact or Fiction leaving Brock with only Crimson Acolyte in his hand. He topdecked an Absorb and tried to stop a Fact or Fiction of Batarseh's, but it was countered by a Gainsay. It turned up two Prophetic Bolts, an Undermine and two Salt Marsh, and Brock was forced to hand over the Undermine and a Bolt. Brock put out a Stormscape Apprentice, which quickly had a reason to keep busy when Batarseh put out his Crosis, the Purger. A turn later Batarseh cast Urza's Rage to kill off the Apprentice and free Crosis from its fate of constantly being tapped, but after a while Brock realized he had a Crimson Acolyte in play and gave the Apprentice protection. But Batarseh was far enough ahead that it didn't make much difference. A Pyre Zombie came out with the Familiars and Bolts having brought Brock down to seven, and when he pushed through a second Lobotomy with an Undermine Brock scooped up his cards to hide his sideboarding strategy. 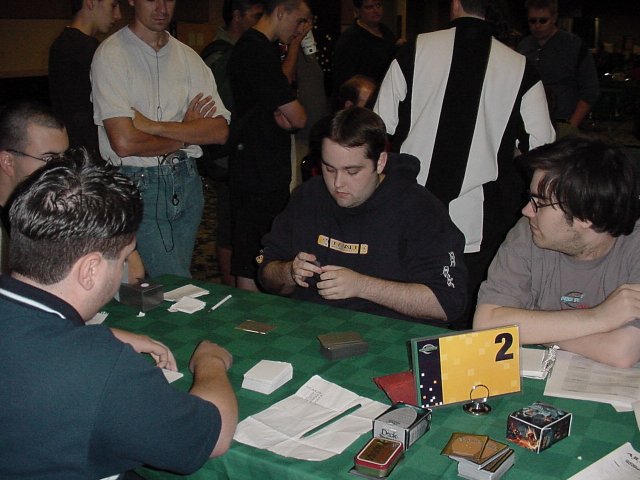 Game three seemed extremely frustrating for Brock for a while. He got his second turn Galina's Knight out, but the third turn Meddling Mage got Gainsayed while Brock looked at a Plains in play and a Disrupt in his hand. Off the top once again came a Nightscape Familiar on Batarseh's third turn. Brock used a Repulse to buy time as he did in game two, but it just came right back out. Brock could only toss out a Crimson Acolyte, and Batarseh's Fact or Fiction was played with one mana untapped, although Brock still used the opportunity to cycle Disrupt. The five cards were Urza's Rage, Fact or Fiction, Crosis the Purger, Urborg Volcano and Shivan Reef. Brock put the dragon with the lands, providing the means to cast it in the pile. Still, the alternative was to pair the Crosis with one of the other spells and that probably would have been even worse. Brock put out a second Galina's Knight and attacked Batarseh down to thirteen. Batarseh untapped and played out the Crosis, while Brock was still stalled on lands and could only play a Stormscape Apprentice. When the Crosis hit, Batarseh correctly guessed blue and Brock discarded his entire hand: two Fact or Fictions, Gainsay and Absorb. All Brock had left was his army, so he sent in past an Apprentice-tapped Familiar, and Batarseh could only shake his head as he realized that he was going to lose the race despite the Crosis. A burn spell off the top would have combined with his Pyre Zombie to do the last five damage, but he failed to find one or removal capable of stopping the army of Protection from Red creatures. The brave Knights carried the day and the match, with aside from two Voids the traditional solutions of Spite/Malice, Void, Repulse and Exclude all sitting either in the sideboard or not in the deck to begin with.