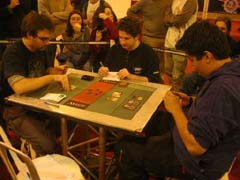 Fresnedo and Romão fighting it out.Romão kicked the game off to a flying start with Taunting Elf, Goblin Turncoat, cycled Tusker and played a morph. All this while Fresnedo absorbed damage and played two morphs. When Fresnedo finally settled the game he was at twelve and Romão's army had a Taunting Elf to push the damage.

But before releasing the alpha strike Carlos had another trick to play. He unmorphed Sootfeather Flock. Despite a Daru Healer accross the table the Flock kept piling damage on Javier's life total.

Fresnedo revealed Daru Lancer, gave it a Crown of Fury and started attacking. But the Brazilian seemed miles ahead. Until he tried to attack with Taunting Elf. Javier used a perfectly timed Chastise to kill the lurer and set up the blocks to his imense advantage.

In that exchange Romão lost three creatures, killed none and dealt no damage. Hardly a successful attack. Seizing the opportunity Javier Fresnedo started closing in on the damage race.

Pretty soon he was catching up, thanks to his huge Lancer and a Charging Slateback. All Carlos had working for him was some life advantage, the Flock and chump blockers. Javier tried to destroy that set up by using Lavamancer Skill on the Sheperd of Rot but Carlos had the perfect morph to turn face-up: Patron of the Wild.

Through this all the Sheperd kept pinging away. Just as Romão ran out of chumpers the Sheperd and the unblockable Flock dealt fatal damage.

The winner of this match will play against Antoine Ruel who defeated the second Spanish player in a few minutes. It's now up to Fresnedo to defend the home country.

Again Romão set himself up for the long game with an early Sheperd of Rot and Timberwatch Elf. Fresnedo tried to break through with Daru Cavalier, White Knight and Battlefield Medic but the Brazilian had Crown of Suspicion for the Medic.

Pretty soon Carlos'morphs turned into nightmares. Well, not nightmares. More like unblockable Flocks. With six damage of unstoppable damage coming through and Timberwatch Elf helping the defensive crew there was little Javier Fresnedo could do to balance things out. To clinch the game Romão revealed a Patron of the Wild.