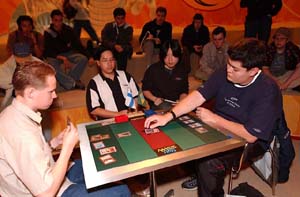 This is the first time on the big stage for Carlos Romao, who has become known as the "Brazilian Huey", and the Finnish Champion Tuomos Kotiranta. Both players are hoping to ride their Psychatog decks to the final round.

As everyone knows, the Psychatog deck is designed to kill in one overwhelming attack. Although both players have tweaked their decks, outfitting them with some tricks, it's likely each game will end with an Upheaval followed by a knockout punch from the grinning demon. Romao is using the traditional Psychatog deck modified with Cunning Wish, which Kotiranta has splashed red for Burning Wish.

When two blue decks face off in a mirror matchup, it comes down to mana tempo and hand advantage. While blue players normally don't like to tap out in any case, Psychatog adds more pressure to the blue player, because tapping out against another Psychatog deck is the equivalent of committing suicide.

Under Kotiranta's wary gaze, Romao goes first. Both lead off with a Salt Marsh. Romao's Nightscape Familiar is quickly dealt with by a Engineered Plague from Kotiranta. Romao returns the favor by using Chainer's Edict on Kotiranta's first Psychatog. After this initial flurried exchange, the match settles down, with both Kotiranta and Romao playing Draw-Go, slowly building up land, waiting for the other to make the first move.

Kotiranta blinked first, playing a Fact or Fiction which sparked a small counter war. Kotiranta was able to force through the FoF, but Romao took advantage of his opponent's lack of mana to play Cunning Wish, going to his sideboard for a Fact or Fiction of his own.

This pattern continued for some time, with stretches of land being played interrupted by end of turn permission fights over Fact or Fiction. 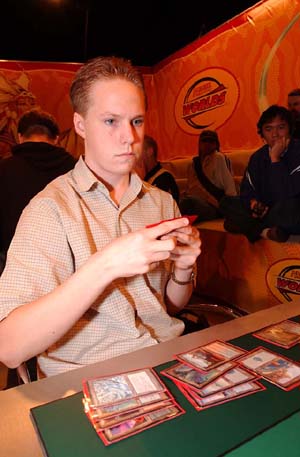 However, Romao was able to force through more card drawing cards than his opponent, and slowly built up hand advantage, patiently gathering in his hand his key cards as well as permission cards to protect them.

The game ended when, after a Fact or Fiction garnered him an Upheaval and Psychatog, Romao used Cunning Wish to fetch Mana Short, drawing a concession from Kotiranta.

Kotiranta chose to draw, while Romao was forced to mulligan. Kotiranta gained early board advantage with an unopposed Psychatog, and began whittling away at Romao's life total. Unfortunately, he was unable to out-counter Romao and prevent him from gaining card advantage with Fact or Fiction and Deep Analysis. Along the way, a Chainer's Edict from Romao stopped the Psychatog from turning into a real threat.

As game proceeded, Romao burned through his deck with 3 Fact or Fiction and 2 Deep Analysis. On the other hand, Kotiranta stalled unable to draw any card drawers of his own. As Romao's mana and graveyard advantage slowly grew, it became apparent which way the wind was blowing. Unable to produce any threats or keep up with Romao's mad card drawing, Kotiranta conceded when a Fact or Fiction by Romao showed an Upheaval.

With his back against the wall, Kotiranta came out swinging, producing an early Psychatog and attacking aggressively while using counters to stop Romao's attempts to remove the 'tog or produce a blocker. 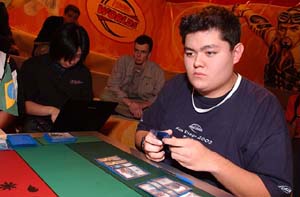 His counters spent stopping Romao from setting up any kind of defense, Kotiranta couldn't stop his opponent from using his card drawing cards to gain hand advantage. The Brazilian Huey started playing Fact or Fiction and Deep Analysis successively. Realizing Kotiranta had abandoned any attempt at getting the combo, instead going for a beatdown win, Romao even started flashing back Deep Analysis from his graveyard.

Eventually finding a Nightscape Familiar, Romao was able to stop Kotiranta's attacks. Using Duress to confirm that Kotiranta had no surprises left, Romao produced his own Psychatog.

Uttering a prayer, Kotiranta slapped down the top card of his deck. Pulling a Duress, he quickly cast it, hoping to somehow recover. Romao smiled as he slowly spread his hand out in the Red Zone, revealing 2 Counterspell, 2 Memory Lapse, 1 Fact or Fiction, 1 Gainsay, and 1 Circular Logic. Shaking his head, Kotiranta extended his hand.