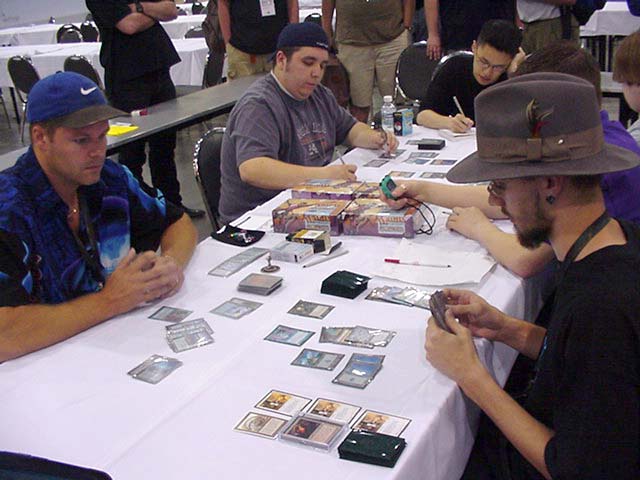 Brad Cole is the owner of a card store in Idaho Falls named "A Street Games". He carried a Nether-Go deck into the Top 8, where he found himself three matches away from a prize that will last a lifetime. Chad playtested for this event at Adventurer's Guildhouse in Flint, Michigan. He came down with ten friends to this event who gave him a hard time about his deck, but he is the only one from the group to place in the Top 8. Both decks are similar, although Chad has more discard effects. Besides Probe, he is also running Bog Down. This can prove to be the deciding factor in the match, as the early disruption of Brad's hand can be enough to give Chad the window of opportunity needed to force through card drawers such as Fact or Fiction, allowing him to take control of the game.

The aspect of the match going against Chad is that he has some dead weight cards in Dark Banishing and Maggot Therapy. Theoretically, Maggot Therapy can take down a Nether Spirit for a turn, or even put it in the graveyard with a second to stop recursion. Still, in a control mirror match, this is not the most desired effect to get out of a spell. Every card matters, and every dead card is one less to utilize.

Brad played first, and Chad used a Port to force through Bog Down on the following turn, causing Brad to discard two Vindicates. Another Bog Down was played on the following turn, and Brad countered it with Memory Lapse. With one mana open, Chad used Sleight of Hand to manipulate his deck. Brad was now stuck at three lands, and Chad continued the pressure by recasting Bog Down. Brad attempted to Absorb it, but Chad added Counterspell to the stack. This allowed Bog Down to resolve, and Brad discarded Wrath of God along with Dromar's Charm. Tsabo's Web was then cast by Brad, which shut down Chad's Port.

It was now Brad's turn, and he played Probe with kicker, discarding Wrath of God and island. Chad pitched Tsabo's Decree and Recoil. Chad cast Fact or Fiction on end step, and the piles presented were Maggot Therapy, Underground River, Dark Banishing and Daze in one pile, and a Counterspell by itself in the other. Chad took the one card pile, since the other cards are not very useful in this matchup.

The fight for card advantage supremacy continued, as Brad used Dismantling Blow with kicker on his Tsabo's Web to draw more cards. Chad used Counterspell to counter it. Fact or Fiction was played a few turns later by Chad, who won the resulting counterwar. The piles made were Nether Spirit/Salt Marsh and Vendetta/Salt Marsh/Recoil. Chad took the three card pile, and the Nether Spirit popped into play on his upkeep, representing the first win condition to be seen so far this game.

Bog Down with kicker was played by Chad on the following turn, and Brad added Foil to the stack. Dromar's Charm was cast by Brad, which allowed the Bog Down to be countered. Brad played Fact or Fiction on end step, and the piles made were Nether Spirit/Dromar and two Coastal Tower/Dromar's Charm. Brad took the two card pile, untapped and played Probe with kicker. Brad discarded Nether Spirit and a land, while Chad pitched Dark Banishing and a land. The Nether Spirit on Brad's side of the table came into play on his next turn, bringing the game to a stalemate.

At this point Brad counted the cards in both libraries, and found out that he had eighteen cards left, while Chad had nine. He played Probe with kicker, commenting "I swear, if you play Stroke of Genius on me . . . I'm going to kill you." Chad discarded Nether Spirit to the Probe, giving Brad the perfect opportunity to cast Wrath of God. It would have stopped Chad's Spirits from coming back, but Recoil was played in response, allowing the Spirit recursion to continue.

With Brad all tapped out, Chad tapped out to summon Avatar of Will, a card he refers to as "The Fat Man". He commented that Brad would probably have the Wrath, and he did. At this point, Chad simply could not win, as Brad's Nether Spirit was holding the ground down to protect him from Brad's Spirits. With every turn that passed, Chad came closer to running out of cards to draw. He was able to remove the blocking Nether Spirit twice with Recoil and Maggot Therapy Wreck-Nology, but it was still not enough damage to get the job done. Chad ran out of cards, and it was on to game two.

Chad got to play first this time, and Brad mulliganed his opening hand. While shuffling, he joked "This will keep me from getting decked!" Chad went ahead and played Bog Down while staring at two untapped blue sources, and Brad countered it with Memory Lapse. When it was replayed on the next turn, Brad was ready with yet another Memory Lapse. The third time was not a charm, as the Bog Down was finally put to rest with Counterspell. Three Tsabo's Webs were played in consecutive turns by Brad, which shut down Chad's High Market.

Fact or Fiction was played by Chad on end step, and the piles made by Brad were Misdirection/Rishadan Port and Cremate/Underground River/Rishadan Port. Chad took the three card pile and untapped, and played Lobotomy. A counterwar resulted, which Chad won. This left Brad with only Last Breath and an island in hand, so the Last Breaths were all taken out of Brad's hand. With Chad tapped out, Brad topdecked and played Fact or Fiction. The piles presented were Counterspell/two lands/Gainsay and Fact or Fiction. Brad happily took the four card pile, and sent the turn over.

A win condition finally hit the table when Chad summoned Nether Spirit. Brad played Duress and saw Chad's one card hand, which only contained Avatar of Will. He then played his own Nether Spirit, bringing the game to a stalemate. Chad attempted to play Bog Down with kicker, but Brad was ready with Counterspell. The game now slowed down to a crawl, as both Nether Spirits stared across the table at each other. Chad tried to break the monotony by attacking and trading, and then following up with Cremate. Brad used Absorb to prevent that plan from going into action.

A Fact or Fiction was played by Brad on end step, and Chad made piles of four and one, with the Nether Spirit by itself. Brad took the pile of four, and put Nether Spirit in the graveyard, rendering him unable to recur the Spirit. A Probe with kicker followed, and Chad discarded Avatar of Will, which was the only card in his hand. This also prevented Chad from being able to bring back Nether Spirit. He tried to play catch-up with Fact or Fiction, but Brad countered it with Gainsay. With control established, Brad played Dromar, which resolved after a brief counterwar. Chad was now left with no cards in hand, and the rest was academic.