Before this weekend, if you were to ask players who they thought was the best player without a Pro Tour Top 8, there would be two answers you'd commonly get. The first person to come to mind is Owen Turtenwald, who earned the 2011 Player of the Year title despite not finishing in the Top 8 of a single Pro Tour during the season. He finally managed to break through to a Pro Tour Top 8 this weekend.

The second person you'd hear about is Gerry Thompson.

Thompson's track record at Pro Tours before this weekend had become a gag over the years. With an impressive Grand Prix history that features nine Top 8 finishes, including two wins at Denver in 2008 and Nashville in 2010, the gold-level player from Roanoke, Virginia has quite a reputation. Unfortunately, while his Grand Prix record was stellar, a Sunday finish on the Pro Tour had eluded him in all of his thirty-two appearances. At least, until now.

His opponent, Joel Larsson of Stockholm, has recently made a name for himself by earning his place on the 2011 Sweden national team. The 2011-2012 season was huge for him, as he landed three Grand Prix Top 8s during the season, finishing 7th at Praque, 5th at Pittsburgh, and 3rd at Manchester. He also earned himself a 10th place finish at Pro Tour Nagoya. 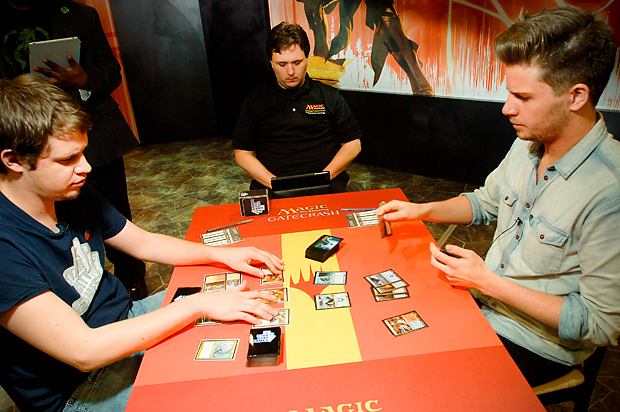 Joel Larsson of Sweden and Gerry Thompson settle into their first appearances in a Sunday Pro Tour match. The two decks, while seemingly similar, play very differently, especially after sideboarding.

When coverage reporter Nate Price talked to Thompson about this match, he was straight-forward about what he felt the result would be. Thompson feels that he's heavily favored in the first game, but because Larsson has access to Geist of Saint Traft out of the sideboard, he would be the underdog in the remaining games. Would his expectations be proven correct in this Blue-White-Red Flash matchup?

Both players spent their first few turns playing lands, with Thompson cycling an Azorius Charm to find a third. He was the first to act with Boros Reckoner, while Larsson whiffed on a fourth turn Augur of Bolas. A second Boros Reckoner gave him a fast clock, but Larsson's Cavern of Souls naming angel telegraphed a future play. 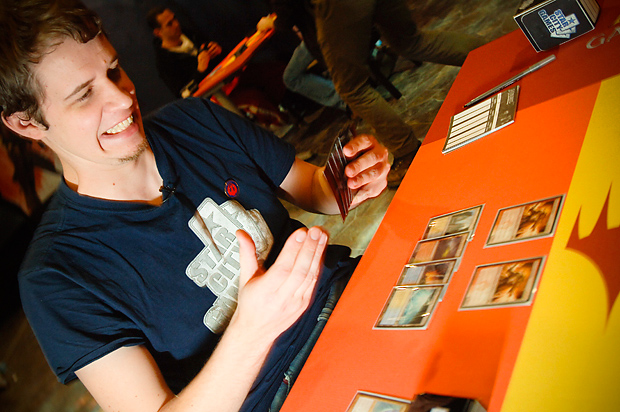 Thompson works to bring the Boros beatdown on his opponent.

"Nice cards," laughed Thompson when Pillar of Flame and Boros Charm hit the graveyard via Larsson's mian phase Izzet Charm, as the Swedish player unsuccessful dug for his sixth land. He passed with three open, as Thompson disposed of Larsson's angel with Mizzium Mortars. When Larsson used Searing Spear to destroy one of Thompson's attacking Boros Reckoners, it was a clear sign that things weren't going well for the Swedish player.

Another draw step later, and Larsson was done with the first game.

As players made sideboard changes, the two discussed their mana bases. "I think yours is a little greedy," Thompson said. "I think yours is too," retorted Larsson, as the two engaged in some friendly banter. Larsson disposed of his first score sheet. "One sheet per game?" Thompson asked. "So wasteful!"

Larsson immediately kept, with a frown coming after Augur of Bolas whiffed. "I'm not very good at this," he said, putting a few creatures onto the bottom of his deck, while Thompson Thought Scoured himself to find lands. 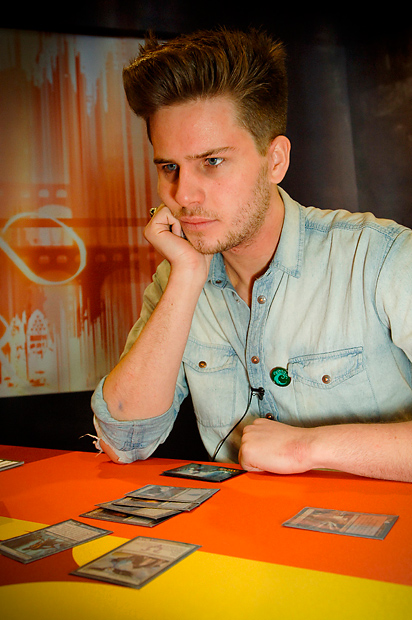 Larsson's deck is well equipped to punish other control decks like Thompson's after sideboarding.

Larsson, meanwhile, was quick to put on pressure with a post-board Geist of Saint Traft on the third turn. Thompson fired back with Boros Reckoner, but in a fight between three mana creatures, Larsson had the upper hand. Another Augur, and another miss, came from Larsson, and when his creatures attacked, he had Azorius Charm to set back Thompson's Reckoner, as the American player fell to 14. Thompson simply replayed his Reckoner and a tapped land.

Larsson played a Hallowed Fountain untapped and sent in the team, as Moment of Heroism saved his Geist of Saint Traft when Boros Reconer blocked it. Larsson led in life totals 22 to Thompson's 8, as Thompson was running out of options and was still fighting against the legendary cleric spirit.

An attack from Larsson prompted Restoration Angel from Thompson, who blocked the angel token, going to 5. When Snapcaster Mage for Thought Scour yielded nothing on the next turn, Thompson shrugged and went to the third game.

Both players had immediate decisions about their opening hands: Thompson kept, while Larsson shipped his hand back.

Thompson was first to act with Augur of Bolas, who missed. Restoration Angel on Augur at the end of Larsson's fourth turn merited a Searing Spear on the Augur, denying Thompson a chance at an extra card, as both players worked to hit land drops.

Restoration Angel's attack warranted Azorius Charm from Larsson, which was stopped by Thompson's Dispel. Augur of Bolas from Thompson was the follow-up (finding him nothing), as Larsson used Sphinx's Revelation when he untapped, which got him three cards. However, he was behind on board, as Thompson began to attack with his creatures, leaving plenty of lands up. Attacks put Larsson to 10.

When Larsson went for Snapcaster Mage when Thompson attacked in again, Thompson had Essence Scatter. Larsson had a back-up plan with Azorius Charm to put Resoration Angel on top, keeping Thompson from drawing a land. Thompson, however, had a Restoration Angel at the end of the turn to free up his next draw step to try and find a land. With Thompson tapped out, Larsson fired off a second Sphinx's Revelation for five, discarding two lands at the end of his turn and putting him in a commanding position. 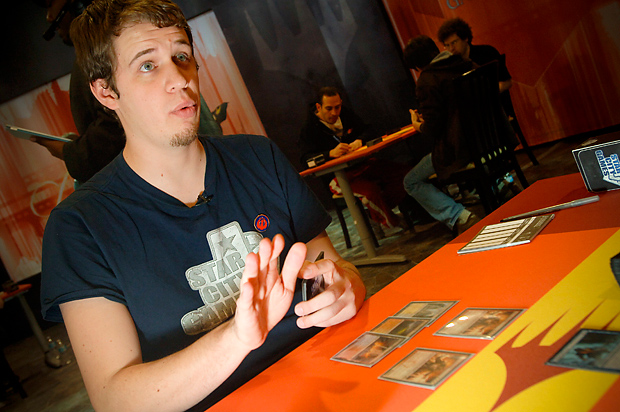 No! Stop! You don't need any more cards or lands, I swear!

Thompson pressed on, with his blinked Augur of Bolas missing yet again, but allowing him to possibly draw a land. He found a seventh land and attacked, as Larsson led with Augur of Bolas on the next turn and passed with plenty of mana open. Thompson attacked in. "As expected," Larsson said as he put his Restoration Angel into play, with a blinked Augur via Larsson's Restoration Angel found him Searing Spear. Larsson's creatures blocked, protecting his dangerously low 10 life. A post-combat Harvest Pyre for 1 was aimed at Larsson's angel, which warranted Boros Charm from the Swedish player.

Larsson's Augur of Bolas cracked in for the first point of damage Thompson has taken, and he followed up with Geist of Saint Traft, putting Thompson on the defensive, who was behind on both lands and cards in hand. Thompson drew and was forced to pass.

Larsson prepped for combat with Augur of Bolas, finding Negate. Thompson's Restoration Angel on Augur after Larsson attacked in yielded no extra card, as the angels double-blocked Larsson's 3/4 flier, and the Augur of Bolas jumped in front of Geist. Larsson used Moment of Heroism on his Angel, while Boros Charm gave it double strike. Thompson countered back with Snapcaster Mage on Dispel, but Negate stopped that, as the two Angels went down and Larsson's life total jumped from 10 to 20.

However, Thompson had the perfect follow-up ready and waiting with an overloaded Mizzium Mortars, as Thompson started attacks, bringing Larsson down to 17. Searing Spear dispensed of Snapcaster Mage and a new Geist of Saint Traft allowed Larsson to press on. The Geist attacked in as Thompson fell to 10. When Larsson had Snapcaster Mage for Sphinx's Revelation on Thompson's upkeep, the American player revealed nothing but land and went back to his sideboard.

"Somehow you have a better Revelation deck than me," Thompson said.

Larsson was first to act with Augur of Bolas. "It's not even gonna hit!" Thompson said, as Larsson looked at the top three, chuckled, and put some creatures on the bottom. Thompson, meanwhile cycled through an Azorius Charm at the end of Larsson's turn, and another one on his turn to find a third land. Larsson landed Boros Reckoner, content to keep playing lands while Thompson whiffed on a fourth land, casting Augur of Bolas and finding his third Azorius Charm. 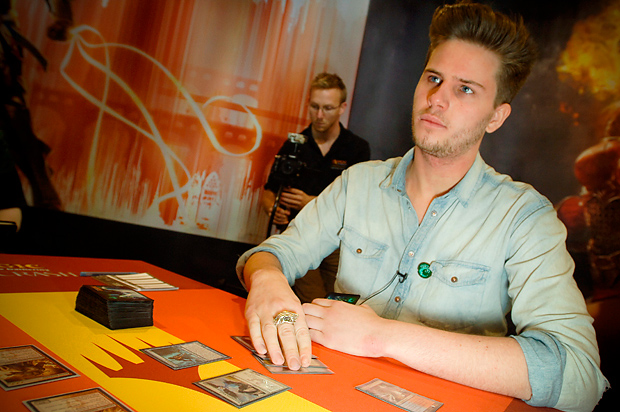 Larsson's draw capitalizes on his opponent's struggle to find lands.

Thompson went to 16 when Boros Reckoner attacked in, as Larsson passed with four open. Thompson cycled his third charm, then played an untapped Steam Vents and passed. Larsson attacked in with Boros Reckoner. Augur of Bolas jumped in the way, as the 1 point it dealt to Reckoner got flung back at Thompson.

Thompson shrugged and aimed Mizzium Mortars at Boros Reckoner, using Dispel to stop Boros Charm. Larsson cycled Azorius Charm at the end of the turn to find more action. "If you didn't have Dispel, things could have been fun," Larsson said, noting that he was one counter away from just gaining an arbitrarily large amount of life with an indstructible lifelink Boros Reckoner.

Thompson fell to 9 from the Reckoner, then 8 when the Augur attacked. Geist of Saint Traft earned Supreme Verdict from Thompson, who played a fifth land tapped. Larsson fired back with a replacement Boros Reckoner, passing with four open. Thompson had his own, which blocked Larsson's on the next turn. Larsson gave it first strike, and Thompson dealt 3 to Larsson's creature. Larsson attempted to save it with Restoration Angel, but Essence Scatter stopped that, and Larsson's Reckoner sent 3 damage to Thompson, dropping him to 5.

Both players moved into a draw-go game, until Thompson added Restoration Anngel to his board. Larsson attempted to defend with Restoration Angel himself, but Snapcaster Mage for Essence Scatter stopped that. Larsson had a distraction in the form of Jace, Memory Adept which drew him a card and then went down to attacks. Larsson passed again, as Thompson sent his creatures in. He passed after playing Boros Reckoner, three mana open.

When Larsson drew a Negate, and with his opponent sitting with only a few mana open, he saw an opportunity. He aimed Boros Charm at Thompson, which warranted Snapcaster Mage for Dispel. Larsson showed him Negate and Searing Spear for the final point of damage. Thompson offered the handshake, and wished Larsson luck in his Semifinal match.

Joel Larsson wins 3-1 and move on to the Semifinals!