Almost every Pro Tour Top 8 features some bright new shining faces, hoping to finally break into the fame and riches of superstardom. Pro Tour Nagoya is no different, and two of the relative unknowns heading into the single-elimination rounds found themselves squaring off against one another in the Quarterfinals. On one side of the table was American Pat Cox, fresh off a victory at the StarCityGames.com Open Invitational one weekend previous. On the other side was French player Elie Pichon, looking to carry the flag of a nation that has more Hall of Fame members than almost any other.

Elie led the match off with Embersmith, putting its ability to good use the following turn as he cast and equipped Sylvok Lifestaff. It was a solid start for the French player's red and white deck, and across the table his opponent passed the first three turns without a single play. Cox's lack of action, however, was a ruse as he surprised the Embersmith with a Shimmer Myr during an attack. Pichon was ready with a Panic Spellbomb to prevent the 2/2 from blocking, and Pat fired back with a Phyrexian Rager to stabilize. 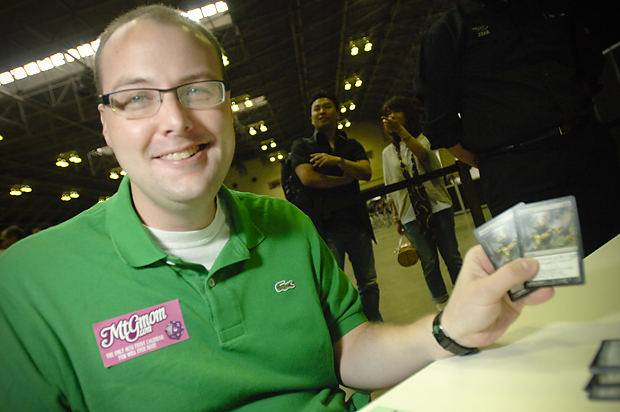 Patrick Cox shows off a scary suite of double Dismember before the game.

The Lifestaff turned into three 1/1 Goblin tokens as a Kuldotha Rebirth cashed it in, but the mini army paled in comparison to Pat's side of the table which had grown to include a Molder Beast. Afraid the game was going to skip out of his reach, Elie sent his entire team sideways. Pat opted to block only his opponent's Embersmith, but fell to 5 as Pichon cast Rally the Forces, then postcombat added Porcelain Legionnaire to the battlefield. Pat trumped with Alpha Tyrranax, but his fatties were no match for his opponent's increasing horde of weenies.

Banishment Decree sent the Tyrranax back to the library from whence it came, and once again the French player pressed the red zone with an all-in attack. This time his opponent had no choice but to block as many creatures as he could, but a surprise Mutagenic Growth for lethal left Pat reaching for his sideboard, unable to stabilize before being overwhelmed by his opponent's smaller but more plentiful threats.

Ardent Recruit led the way for the red-white deck in the hands of Elie Pichon, but when he tried for an Embersmith, his opponent blew it out of the water with Dismember. Pat, remembering the terrible time he had with his opponent's threats in the first game, immediately went to work stabilizing by casting Phyrexian Rager, then Porcelain Legionnaire. Pichon wasn't waiting around for his opponent, however, casting Vulshok Replica and a Porcelain Legionnaire of his own which soon traded for his opponent's copy. 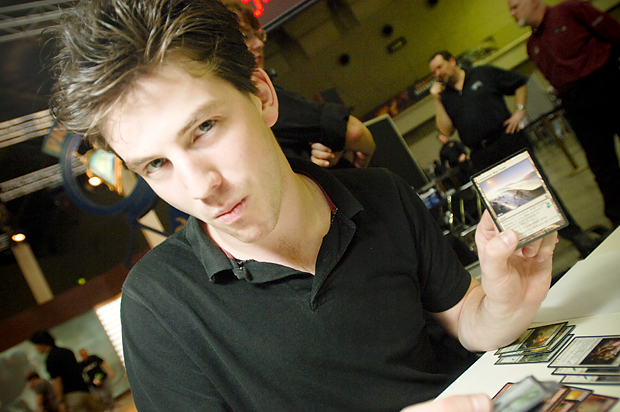 Elie Pichon shows off—wait, he's not really playing that, is he?

The two swapped creatures one at a time in the red zone, a plan that heavily favored the American's deck. After all, given enough time and a high enough life total he would overwhelm his opponent's creatures on size with fatty after fatty. Elie hoped to swarm and overwhelm Cox instead, but a touch of mana screw kept him struggling to execute on that plan. Multiple turns passed with Pichon stuck on a Plains and two Mountains while his opponent was able to cast Tangle Hulk and begin executing on the fatty plan.

The Tangle Hulk succumbed while performing its blocking duties, but was replaced immediately by Alpha Tyrranax. Elie found a fourth land and cast Rusted Slasher, but he was very far behind. The only thing he really had going for him was having been able to get his opponent down to 7 life. That seemed relatively stable, but Pat didn't know Pichon had an Artillerize in his deck, and with Vulshok Replica already on the battlefield, all his opponent needed to do was draw it and sac the Replica to take the game.

Geth's Verdict from Cox changed that plan, forcing Elie to sacrifice his Replica. He then began taking hits from the Tyrranax while hoping to draw some burn to seal the deal. Lifesmith from Pat changed that equation slightly, threatening to potentially rebuild its controller's life total and safely remove Cox from the 7-point burn range he found himself in. Elie tried to make a game of it with Rusted Slasher, but his opponent's fatties proved to be too much, and Pat Cox evened the match at one game each.

Porcelain Legionnaire led the attack for Elie Pichon in the third game of the match while his opponent opened on Lifesmith. A turn later he had a Panic Spellbomb that turned into three Goblins via Kuldotha Rebirth, then he added Slash Panther and sent the team in. Pat blocked the Panther with Lifesmith, but took a whopping 6 damage. He followed up with Dross Ripper, but needed a means of dealing with all of his opponent's creatures, which were cluttering the battlefield.

The Dross Ripper traded for a Goblin token and Mutagenic Growth, but at 6 life Pat was not happy to see his opponent add Sensor Splicer to the battlefield. On four mana he took a look at his next draw and conceded, the game over in under 10 minutes.

Both players mulliganed for the fourth game, but when Elie Pichon accidentally placed seven cards facedown on the table instead of six, his opponent pointed out his mistake and stopped him from drawing the additional card. The penalty for doing so would have been severe—Pichon would have ended up at five cards—and it was a great show of sportsmanship from Pat Cox, especially given that he was in a do-or-die situation.

Elie led the way with Porcelain Legionnaire and Vulshok Replica, equipping Sylvok Lifestaff to the first striker and sending his team. Pat attempted to block with Phyrexian Rager, but couldn't trade when his opponent surprised him with Mutagenic Growth. A Viridian Claw on the Vulshok Replica put Elie even further ahead, and Pat seemed visibly frustrated with the way the match was going. He cast Moriok Replica to keep his head above water, but both of his opponent's creatures had first strike.

Cox fights to stay in it.

Pat attempted to chump, hoping his opponent was out of spells but Elie didn't acquiesce, adding Leonin Skyhunter to the battlefield postcombat. Cox took one more look at the top of his deck but was outgunned, and extended his hand in defeat.

Elie Pichon defeats Pat Cox 3-1 and advances to the semifinals!