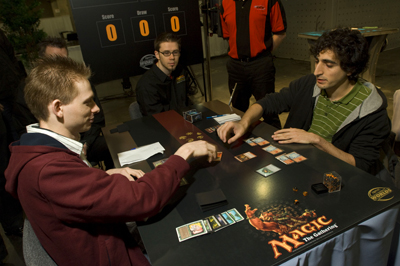 Roel van Heeswijk and Gabriel Nassif vie for a shot at the title. For the second year running he found himself in the Top 8 of the Magic World Championships, adding credence to the idea that he is legitimately contending for the third place slot after Budde and Finkel as “the best player in the game.” Looking past his presence here, though, his deck choice for Standard is a study in contrasts. Last year Nassif stumbled in the Semifinals against eventual champion Makihito Mihara, who snuck out a Dragonstorm when it looked that Nassif had got the game all locked up. This year, it is Gabriel himself who is looking to play the biggest of the storm spells, with the radical redesign of the deck that turns it into more of a burn deck, with explosive potential coming from Spinerock Knoll.

Roel van Heeswijk is in his first Worlds Top 8, but the Dutchman is no stranger to success on the Pro Tour. He has two Pro Tour Top 8 finishes to his name, and won the Dutch Masters in 2006. His green-black control deck has an unfavorable matchup against the storm deck, but Nassif was quick to point out before the match that it wasn’t as far in his favor as many commentators have suggested.

For Game 1, there were definitely a multitude of advantages for Nassif. He won the die roll, and looked on as van Heeswijk had to take a mulligan. Roel had indicated prior to the match that this would be a race. He needed to hit disruption, in the form of Thoughtseize, along with some acceleration, and some kind of a clock to win. Clearly the opening seven did not fit that bill.

The Birds of Paradise that Roel had on his first turn got hit by Shock, and the second by Rift Bolt, with Nassif also playing a pair of Lotus Blooms, threatening a terrifying big turn in very short order. Roel attacked with a Treetop Village, and had Thoughtseize. Crucially, he hit a Dragonstorm, leaving just Rite of Flame and Pyromancer’s Swath in Nassif’s hand. This was exactly the stroke of good fortune that Roel needed.

He followed up with a Shriekmaw, simply to go on attacks with, while Nassif tried to rebuild. Attacks soon took Nassif to 8, forcing Incinerate on a Treetop Village from Nassif. Still in trouble, Nassif drew his card for the turn and passed.

When Roel went in for the deathblow, though, Nassif had a trump in the form of Bogardan Hellkite, who shot down all of van Heeswijk’s creatures and stayed out as a scary attacker. Roel had an Eyeblight’s Ending for it, but was looking low on gas, having just one card left.

That card was Ohran Viper, the perfect threat with which to rebuild, if it survived. Van Heeswijk knew from his Thoughtseize every card in his opponent’s hand, and correctly surmised that the snake would be safe for at least one attack. In point of fact, it got in for two before Nassif went for it. First he had Rite of Flame, then Pyromancer’s Swath. A Grapeshot hit Roel for 9. This allowed Spinerock Knoll to reveal Incinerate for the final points. The game had been very tight, and were it not for Roel being stuck with a Llanowar Wastes as his only black source for some time, he would have been safe for at least one more turn from the explosive power of Nassif’s deck.

For the second game, again van Heeswijk had to take a mulligan.

Nassif: “That’s pretty unlucky... I guess that you didn’t need to take many mulligans in the Swiss?”

van Heeswijk: “The only games I lost with this deck was when I had to mulligan.”

Nassif: “The only match I lost was to black-green.” 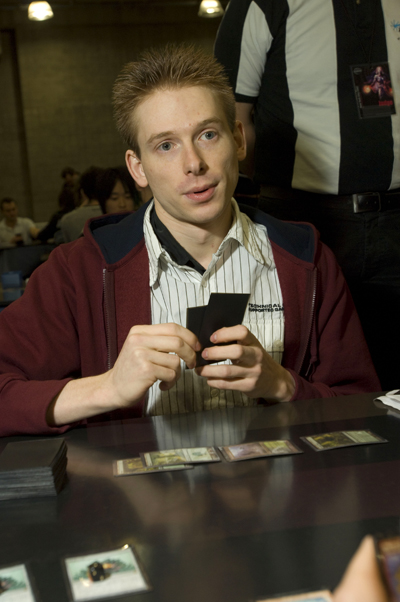 Roel van Heeswijk. Nassif was pretty upbeat about his hand, though. While Roel accelerated with Llanowar Elves into a Troll Ascetic, Nassif had a Spinerock Knoll for turn one, along with a Lotus Bloom and Fungal Reaches for turn two. Barring silly Rite of Flame draws, everything was going to plan.

A second Spinerock Knoll soon followed from Nassif, along with another Lotus Bloom. The mana would be there for the big spells from Nassif—Roel would now have to pin his hopes on getting enough disruption that Nassif couldn’t actually play those spells.

The disruption wasn’t there, so Roel went for Plan B: simply try to race. He attacked Gabriel down to 9, with the potential on board to take Nassif to 1 on the following turn’s attacks. Just in case of Loxodon Warhammer, Nassif used a Grapeshot on a Llanowar Elves to keep Roel off six mana. Van Heeswijk’s attacks dropped Nassif to 6, and he played a Tarmogoyf, before using Krosan Grip on Lotus Bloom as soon as it came in, forcing Nassif to float mana with it in his upkeep. This would leave him unable to play Dragonstorm, but didn’t stop him from playing Bogardan Hellkite to kill the Tarmogoyf.

All Nassif had for the rest of his turn was a Spinerock Knoll and a pass. Should he get 7 damage in a single turn, those Knolls would be deadly. This looked increasingly unlikely though, as Thoughtseize took Dragonstorm for the second game in a row, leaving Nassif with just lands. On just 6 life, Nassif’s Hellkite was in danger of being attacked around, with Roel having a Treetop Village, Troll Ascetic, and a Llanowar Elves.

If Nassif had drawn a burn spell for the turn, then between that and the Hellkite, he’d be able to use his 3 Knolls to good effect. As it was he simply drew and passed. Roel activated his Treetop Village, and a another Bogardan Hellkite jumped in, killing Roel’s Village and Elves, and handily blocking Troll Ascetic. The following turn, both dragons attacked, allowing a third to be revealed by Spinerock Knoll along with a Grapeshot to finish things off.

“You’ve mulliganed more so far this match that that deck did in seven hours testing yesterday,” remarked Nassif, who saw Roel keep his seven for the first time in the match.

Roel had a turn-one Thoughtseize, seeing two copies of Bogardan Hellkite, Molten Slagheap, Shock, Incinerate, Grapeshot and Mountain. Roel took the Incinerate and followed up with a Tarmogoyf the following turn. The green monster who has been so busy in the Constructed formats at Worlds attacked into Nassif and was joined by Troll Ascetic.

While Nassif was playing lands and saying go, Roel continued very aggressively with Garruk Wildspeaker, untapping two lands to get the planeswalker up into Overrun territory. All of a sudden, Nassif was in all sorts of trouble. He played out a Martyr of Ashes, and passed the turn with just enough mana up to activate it—being stuck on the two lands he had begun the game with.

Roel used Garruk’s “Ultimate” ability, and Nassif broke Martyr of Ashes in response, revealing four cards that Roel already knew about and a third Bogardan Hellkite just to make sure that Tarmogoyf died. As it is, an Eyeblight’s Ending on Troll Ascetic (to put a tribal card in the graveyard) was enough to ensure that Tarmogoyf survived, and got to rumble in for 8. Nassif drew for his turn, and scooped up his cards—he couldn’t deal with that ‘Goyf in time. 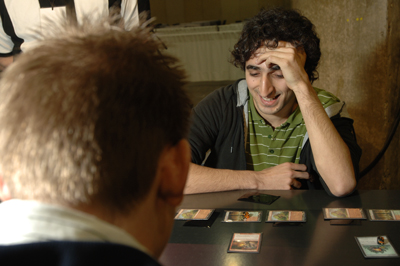 Gabriel Nassif. Both players kept, and on the play, Nassif led with Spinerock Knoll, a card that went from random rare to sold out powerhouse in the space of a day here in New York. He followed up with a suspended Wheel of Fate, watching on as Roel got a turn-two Ohran Viper thanks to Llanowar Elves. Nassif had a second Wheel of Fate to suspend the following turn.

Roel continued with the Snake plan, making a second Ohran Viper, and swinging with the first. Nassif wasn’t under intense pressure yet, and had the potential to draw a colossal amount of cards in the turns that would follow, while limiting the power of those card-drawing Snakes, and of Thoughtseize. In the face of this, his Liliana Vess came down and immediately allowed him to search for a card rather than any of the other options open to him. He would have one turn to use it before the first Wheel of Fate happened.

The turn before Wheel of Fate came off suspension, all Nassif had was a suspended Rift Bolt. His big turn would have a storm count of at least two. Roel showed that the card he’d fetched was Loxodon Warhammer. This provided both an extra clock, and a means of getting out of Dragonstorm range potentially. Roel used Liliana to search again, putting something on top that he would draw into with Wheel of Fate.

The hand that Nassif drew off Wheel of Fate was not the most exciting. Two Dragonstorm, two Lotus Bloom, Martyr of Ashes, Bogardan Hellkite and a Mountain. He drew another Rift Bolt, and set up for what would hopefully be a better turn the next time he tried it. The bolt got suspended, and Martyr of Ashes came down. Nassif had just enough cards in hand to kill off Roel’s threats, and had held the second Lotus Bloom so that he wasn’t going to lose any of those precious red cards to Liliana Vess.

Considering he had a new hand of seven cards to work with, Roel looked pretty non-plussed with his situation. He equipped Loxodon Warhammer and swung before playing a 5/6 Tarmogoyf and Birds of Paradise, along with a land.

At the end of turn, Nassif chose to charge up his lands more rather than using his Martyr. He untapped and resolved Wheel of Fate, looking critically at his new grip before playing Rift Bolt off its suspension, targeting Roel himself. Only 25 more damage to go. Nassif had now seen approximately half his deck, and unless there was a Pyromancer’s Swath under his Spinerock Knoll, all four Swaths were still lurking in that bottom half. Nassif activated his Martyr of Ashes for 4, killing everything but Birds of Paradise and Tarmogoyf. Bogardan Hellkite came down, and killed off those stragglers, along with Liliana Vess. Roel dropped to 21 with the overspill, and Nassif finished with a suspended Lotus Bloom.

A Thoughtseize from Roel took Incinerate, leaving Rift Bolt, Grapeshot, and lands for Nassif. Van Heeswijk followed up with Birds of Paradise, who got equipped with Loxodon Warhammer, and Treetop Village.

On just 8 life, Nassif was in a tricky spot. If he attacked he’d leave himself very open to the swingback, and if he lost any Dragons he’d be in rough shape for win conditions with Roel’s life so high. He played Grapeshot to kill the Birds of Paradise, Roel’s only blocker, and take him to 9. Roel activated Treetop Village and swung back with the Hammer. The life totals were now 2 to 15 in Roel’s favor. He made a Tarmogoyf and passed.

Nassif looked at the 15-point hill he needed to climb. He attacked with both Bogardan Hellkites before playing Rift Bolt and finally Grapeshot for exactly enough. 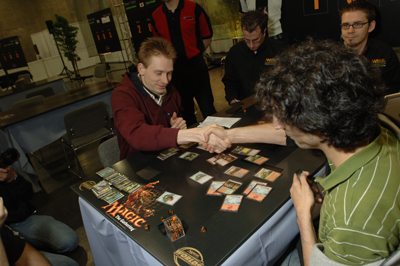 Gabriel Nassif wins 3–1 and advances to the Semifinals, where he will face Patrick Chapin and the Dragonstorm Update mirror match.