t's Pro Tour Sunday again and a star-studded Top 8 is lined up to battle for the $40,000 first prize. This clash features two of Europe's rising stars.

Guillaume Wafo-Tapa has built up a solid reputation over the last year or so as a solid deck designer. Despite that, this is the first time the French player actually has played under the lights on Pro Tour Sunday. His opponent Paulo Carvalho is in his second Top 8 after a quarterfinal appearance at the World Championships last year.

The matchup sees Wafo-Tapa's blue-black control deck take on Carvalho's monstrous red-green deck. Carvalho has some real monsters in his deck in the form of Spectral Force, Bogardan Hellkite and Akroma, Angel of Fury. Wafo-Tapa has plenty of answers in the form of counter-Magic and Damnation. In theory they should be enough, but each of Carvalho's threats is capable of ending the game swiftly should he get them through Wafo-Tapa's defences.

Wafo-Tapa led off with a Terramorphic Expanse to fetch an Island and then accelerated his mana development with two successive Prismatic Lenses. Carvalho also ramped up with the super-elf Radha, Heir to Keld.

The Portuguese player's game plan was to keep making threats until they stuck. Spectral Force was met with Cancel, but the Stormbind that followed arrived in play with no opposition from Wafo-Tapa. It's been a while since this Ice Age enchantment has seen Sunday action, but it's still not lost any of its potency.

Wafo-Tapa hit back with a Haunting Hymn to cut down the Stormbind fuel, but was still taking damage from Radha and a Scryb Ranger. Wafo-Tapa's life total was down to 10, or just five draw steps from Carvalho's deck. 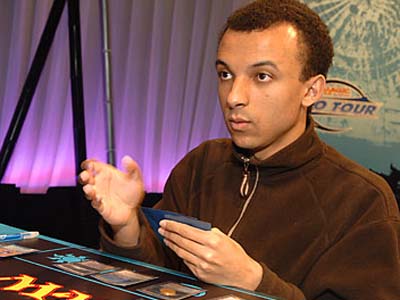 You may think you'll be able to play your spells, but Wafo-Tapa knows better.

The next attack step saw Carvalho's team decimated by Sudden Shock and an Urborg-fuelled Tendrils of Corruption to pull the French player's life total back up to 15.

Carvalho took the opportunity of Wafo-Tapa being tapped out to slip a face-down Akroma, Angel of Fury into play. Wafo-Tapa responded with a Triskelavus and immediately unloaded two tokens to shoot the morph out of play before it could pop out of its shell.

The French player was taking control now. He started attacking with the Triskelavus and then suspended an Aeon Chronicler for one turn to make sure his clock would be fast enough to outrace Carvalho's Stormbind.

Carvalho attempted to Stormbind the cantrip Maro when it came into play. Wafo-Tapa had four cards in hand, so it seemed like a good plan. Unfortunately the French player also had Mystical Teachings in the graveyard. He flashed this back to take his hand size up to five cards and make the Chronicler large enough to survive two activations. Carvalho didn't have enough mana to activate Stormbind a third time and conceded when Wafo-Tapa attacked.

This time it was Carvalho's turn to lead off with Terramorphic Expanse. He got the perfect start with a second-turn Wall of Roots ramping him into a third-turn Mwonvuli Acid-Moss.

The third-turn Acid-Moss on the play is a complete kicking to control players. It pegs them back to two land against six and unable to stop the big threats in red-green from coming into play.

Carvalho's big threat was a Spectral Force. He followed it with a face-down Akroma only to run into Wafo-Tapa's Damnation.

Wafo-Tapa calmly swept it away with a second Damnation.

Wafo-Tapa didn't have a third Damnation and took another 8-point clubbing from the green behemoth. At least he had a little breathing space as the Force wouldn't untap next turn. Carvalho tried to bring the game to a quick end as he added Radha and then a Sulfur Elemental at the end of Wafo-Tapa's turn.

Despite being on a meagre four life, the Frenchman wasn't done yet as a Tendrils took down the Sulfur Elemental and pulled his life total up out of danger. Temporal Isolation took care of the Spectral Force when it untapped.

Then there was a nice passage of play. Carvalho had a Sulfur Elemental and Radha in play and added a second Sulfur Elemental at end of turn. Still in his end-of-turn step Wafo-Tapa cast Teachings for Tendrils and immediately used it to kill Radha. This tapped him out and Carvalho needed no further invitation to smash down a Hellkite … only to be suckered into the third Damnation.

Wafo-Tapa was at three life but the board was clear. He suspended an Aeon Chronicler for one, but had to leave it at home for a while just in case Carvalho had another surprise Elemental.

The game was now swinging in favour of the Frenchman and he finally took full control and got the concession when an Acid-Moss on a Factory was met with a Draining Whelk.

Game 3 started out like a re-run of the second. Carvalho ramped into third-turn Acid-Moss and then dropped Spectral Force. 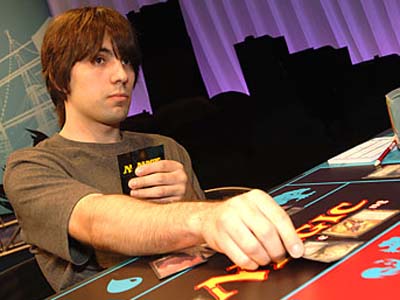 Witness the power of my fatties!

One hit, two hits with the lumbering giant. Meanwhile the French player was short of land. He Cancelled a Stormbind and then a Radha. Think Twice finally found him something to play with. The Force untapped and came in again with a Sulfur Elemental for company. Again it wasn't quite lethal as Wafo-Tapa Tendrils-ed the Sulfur Elemental to leave himself with a single precious life point.

Now he had a little breathing space. The Force wouldn't untap next turn so he tapped out to suspend an Aeon Chronicler to search for answers.

Carvalho found his eighth land and triumphantly threw a Hellkite down onto the table to finally take a game off the Frenchman.

Despite going first, Wafo-Tapa couldn't quite get Cancel shields up on turn three as he needed to fetch land with a Terramorphic Expanse. This allowed Carvalho to slip a fourth-turn Spectral Force onto the table courtesy of Radha.

Temporal Isolation was enough to deal with the first Force and Wafo-Tapa had Damnation to wipe the board when a second Force appeared. This left him tapped out and Carvalho took the opportunity to put a face-down morph into play. I'd say Akroma, but last game a shot morph had revealed itself to be Fortune Thief.

Not this time. Carvalho attacked and flipped over the fire-breathing angel. Wafo-Tapa took down the supporting Sulfur Elemental with Teferi, but now that the Angel had been revealed, he was going to have to sacrifice Teferi while he blew up the world with Damnation.

Carvalho was running on fumes, playing only a Radha to follow the Damnation. She might be enough as Wafo-Tapa was at a fragile three life. The Frenchman dug for answers with Careful Consideration and consigned Radha to a Premature Burial.

Not enough. A flashed out Sulfur Elemental at end of turn zipped through Wafo-Tapa's defences to take the match to a fifth and deciding game.

The deciding game didn't quite see the same explosive start Carvalho had managed in the previous two. He summoned a Wall of Roots and then Radha, but no sign of the big men yet.

Carvalho's first probes, an Acid-Moss and then Harmonize, were met with Cancels and then Wafo-Tapa restocked his hand with Careful Consideration. 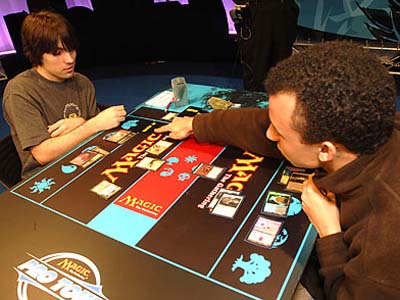 Wafo-Tapa ultimately had his way in the quarterfinals.

The current slow pace of the game clearly favoured the Frenchman. Carvalho tried to get things going with a Harmonize and then a face-down morph. It was probably an Akroma, but I think Carvalho was also running a little bit of a shell game with Fortune Thief from the board to make Wafo-Tapa think a little.

The French player still threw down Damnation and did indeed nail an Akroma. This game didn't look good at all for Carvalho. Mystical Teachings fetched Tendrils and Wafo-Tapa even had enough land to take down a Spectral Force.

It was hard to see how Carvalho could stay in the tournament here.

Wafo-Tapa had got the Teachings engine started.

Wafo-Tapa had an Aeon Chronicler coming out of suspension.

Wafo-Tapa had just countered his Hellkite with Cancel.

This was all going wrong for Carvalho. He did manage to get one Hellkite to stick and axe the Chronicler. Wafo-Tapa just sent it to the graveyard with Premature Burial.

The final straw came when Wafo-Tapa cast Teachings for Draining Whelk in response to Spectral Force.

Guillaume Wafo-Tapa beats Paulo Carvalho 3-2 and advances to the semifinals.