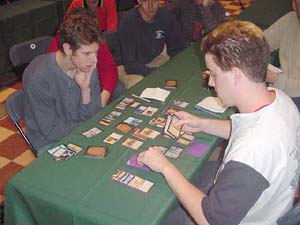 Craig Krempals is a Jersey boy making his first top 8 at a premiere event. As a member of Team TOGIT, he recently placed ninth at Pro Tour Boston, which was his first Pro Tour. He was obviously nervous, but his deck was very good for the matchup. It was a standard blue/white deck, featuring clerics to hold the ground while fliers take the game in the air. Craig's deck, though, also splashed red for two copies of Lavamancer's Skill and a Solar Blast, solving the standard blue/white problem of not being able to handle Sparksmith.

Shaun Doran is a player from Rochester, New York. His finish here has qualified him for his first Pro Tour, but he is not eligible for the amateur prize. His 32nd place finish at GP Cleveland netted him his only pro point, eliminating his amateur status. Had his tiebreakers been slightly worse there, he would have been eligible for more than enough money to compensate for not winning the $250 that came from his finish at Cleveland. His deck is also blue/white. He has a Riptide Replicator to churn out men to go along with the standard complement of fliers and ground stall creatures.

Craig won the die roll and chose to play first. The first play of the game was Shaun's, though, and it was indicative of how the games would play out: Battlefield Medic. Both players played the obligatory turn three Morph creatures.

Craig Solar Blasted Shaun's Morph, which was revealed to be a lowly Disruptive Pitmage and came in for first blood with his Morph. Shaun turn four was better as he summoned the biggest common flier in the set, Ascending Aven.

The Ascending Aven went to work on Craig, attacking his steadily until Craig was reduced to seven life. All the while, though, Craig starting bringing out some ground offense. He summoned a big Daunting Defender, and played the incredible Lavamancer's Skill on his Morph.

The biologist is awful in that matchup, and is almost strictly better when played as a Morph, but Craig revealed his strategy with a second Lavamancer's Skill the next turn. Now able to shoot down anything with less than four toughness, Craig was in the driver's seat. He just took his time, shooting down any resistance and protecting his life total, all the while attacking where possible.

Shaun had a last-ditch Aven Fateshaper, but that just joined Craig's team via Blatant Thievery and ended the game.

Shaun chose to play game 2, and played nothing until turn three, when he summoned Aphetto Grifter. Craig had a turn three Morph, and he had all three colors of land in play when he cast it. 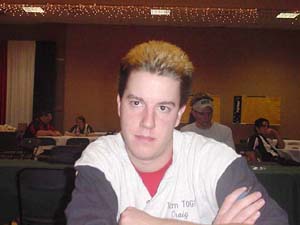 Shaun's turn four saw him summon a Gustcloak Skirmisher. The three toughness flier is huge in the matchup, as it is able to block and kill most of Craig's fliers and live to tell the tale.

The Skirmisher was put on defense by Craig's Mistform Shrieker and a second Morph. Shaun chose to Pacify the second Morph, which Craig unmorphed at end of turn to be Aphetto Alchemist.

The next turn, Craig came in with the Shrieker, but he only had enough mana to pump it once and have a Plains untapped afterwards. Shaun chose to block with a Morph and his Gustcloak Skirmisher. Craig pumped the Shrieker to a 3/3 and let damage go onto the stack. Craig busted out some tricky tricks here. He revealed his first Morph to be a Daru Healer and prevented a point of damage to his Illusion. The Alchemist took some time off from brewing up trouble to untap the Healer and it prevented a second point to the Illusion. The Gustcloak Skirmisher fell and Craig was looking good.

He summoned a Sage Aven and used it to set up a Shared Triumph and his Blatant Thievery. The Shared Triumph was cast, giving all Birds +1/+1, and Craig started sending his fliers.

Shaun, though, was not worried, having 15 life points left. He cast his Riptide Replicator, making 3/3 Wizards, and followed that up with a Fleeting Aven to hold off some damage. If left alone, the Replicator would churn out a pile of Wizards that would combine with Aphetto Grifter to give Shaun a huge supply of Icy Manipulators.

Craig, though, had the Blatant Thievery in hand, but he lacked the third Island needed to cast it and steal the Replicator. He summoned a second Sage Aven, hoping to find the Island, but it wasn't there. He did have a Solar Blast, which was cycled to kill off the Aphetto Grifter.

Shaun summoned more and more Wizard tokens, attacking all the while to reduce Craig's life total to 12. When Craig finally found his third Island, he cast Blatant Thievery in an attempt to take the Replicator.

Shaun tapped three lands and made a motion to Complicate the spell, but all he could do was tap a fourth and make a Wizard.

Craig shipped the turn with 12 life to his name, and he had to be feeling great about making the semi-finals. Shaun's draw, though, was the best it would have been: Choking Tethers. Shaun tapped Craig's team, and his creatures totaled to 14 power, which was exactly enough, because Craig would have been able to prevent two damage to himself with the Healer/Alchemist team. 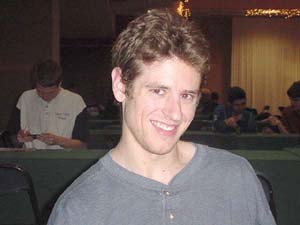 This quote sums up the match perfectly. Craig chose to play and keep his opening hand of Secluded Steppe, Plains, and five good spells. He discarded three timed before finally drawing a third land. That land was also a Secluded Steppe, possibly the worst land he could have drawn in that position. Shaun, though, came out quickly with Aphetto Grifter, Fleeting Aven, and Dive Bomber. He waited until he had seven lands in play to cast Gustcloak Skirmisher, advertising a Complicate, but it didn't even matter as he was able to Choking Tethers away Craig's weak defense and take the match.