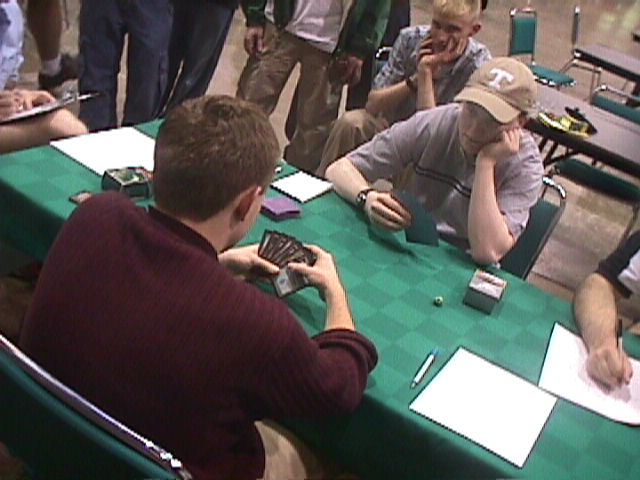 Brad Swan vs. Craig Wescoe This match marks Wescoe's second top 8 Grand Prix finish in a row, following his finish in Minneapolis. Swan is clearly no slouch in Limited, with a top 8 finish at PT - Barcelona. This matchup features a mirror match of Blue - Black decks, but it is widely regarded that Wescoe holds a distinct advantage, with numerous bombs including Thought Devourer and Repentant Vampire, as well as multiple bounce and removal spells including Repels, Aether Bursts, Afflicts and Patriarch's Desires, with a few Scriveners to boot. Swan's decks is a bit more reasonable, with a fair mix of fliers, with less bounce and removal, and a few more weaker cards like Phantom Whelp and Deluge, largely irrelevant in this matchup of fliers. Swan does have a Caustic Tar in his deck, the one card Wescoe seems to be concerned with, as he has no real answer to it, and it can easily break the likely stalemates that this kind of matchup can devolve into. 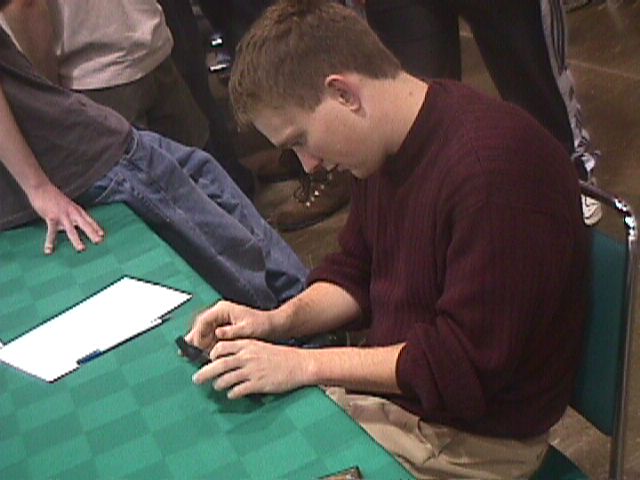 Brad SwanWescoe wins the die roll and elects to draw first, a common choice in this format, where card advantage is often key. Wescoe makes the first play of the game with a turn 2 Frightcrawler, but fails to play a land on turn 3, having only two swamps in play. Swan leads with a turn 4 Mindslicer, and Wescoe again fails to play his third land. Swan follows up the Mindslicer with a Whispering Shade, and attacks with the Mindslicer. Wescoe is really under pressure now, and he really needs to find land quickly to deal with Swan's threats. He does find land three on turn 5, but it is a Seafloor Debris, coming into play tapped and offering no immediate help. Swan attacks again and Wescoe sacrifices the Frightcrawler to the Mindslicer, taking a hit from the shade. Then Swan plays a Thought Eater, keeping the pressure on. Wescoe draws his fourth land, but it too comes into play tapped, a Bog Wreckage, a wreckage indeed to Wescoe's chances to fight his way out of the hole he is in. He plays out a Dusk Imp, which follows in the path of the Frightcrawler, jumping in front of the 'Slicer, as Swan's Shade and Eater hit him again, followed up by the dreaded Caustic Tar. Wescoe draws and concedes the game on his seventh turn, as he has no answer to Swan's creatures and land, really falling victim to a very poor and unfortunate mana draw.

Before the match, Wescoe mentioned that he was concerned about the Caustic Tar, so much so that he sideboarded in a Dematerialize in place of the Frightcrawler, as well as adding an eighteenth land to his deck. Swan swapped out the nearly useless Deluge in this matchup of fliers for a Tainted Pact, allowing him a way to possible search out the Tar. This time, Wescoe decided to play first, and keeps another two land hand, this time with two islands. Even after the outcome of the first game, Wescoe demonstrates faith in his deck to provide him with the mana needed to pull through. On the other hand, Swan keeps a hand of six land and a Darkwater Egg drawing first, hoping to draw some spells. 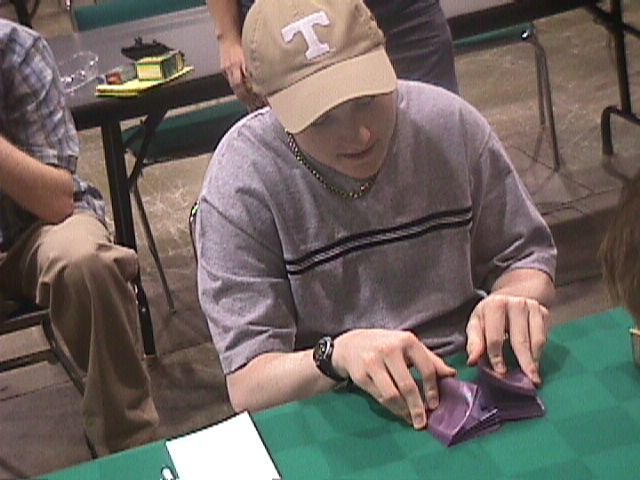 Craig Wescoe Swan makes the first plays of the game, with a turn 1 Egg, and a turn 2 Phantom Whelp off the Egg. Clearly, this is not the start he had hoped for, but as Wescoe again fails to draw a third land, things were looking up for the underdog in the matchup. It looked like Swan may steal the match from Wescoe off of double mana screw. Nonetheless, Wescoe hung tough, Syncopating a Fledgling Imp and Aether Bursting Swan's Aven Fisher, keeping a majority of the pressure off of him, but taking the occasional hit from the Phantom Whelp. By turn 5, Swan had replayed his Aven Fisher while Wescoe was still stalled at two mana and forced to discard a Scrivener. Swan took the time to Peek at Wescoe's hand, revealing another Aether Burst, Repel, Cephalid Looter, Scrivener, Repentant Vampire, Thought Devourer and Whispering Shade. Swan realized that he needed to start putting more pressure on Wescoe, or he could easily fall victim to Wescoe's bombs once he found some mana. Unfortunately, all he could do was replay the Whelp again, allowing Wescoe to Aether Burst both of Swan's creatures. Wescoe finally draws his third land on turn 7, playing a Cephalid Looter, which would really help him start digging throught his deck for mor land.

Recoginzing the threat the looter poses, Swan wastes no time casting Ghastly Demise on the Looter, followed up by replaying the Whelp and Fisher. Wescoe then plays a Bog Wreckage, giving him options for his next turn. Swan attacks and plays a Dreamwinder, finally seeing a much more reasonable threat. Wescoe finds his fifth land and decides to play the Vampire. Swan decides to swing with everything, loosing the Fisher to the Vampire as Wescoe goes down to 6 life. Swan replays the Whelp, along with a Whispering Shade. Wescoe answers by Repelling the Dreamwinder, gaining Threshhold, allowing the Vampire to kill the Shade. With Threshhold, the Vampire is a real threat, as it can take out any of Swan's Black creatures.

Swan plays a Gravedigger to get back his Fisher, and Wescoe has the Vampire dispatch the Gravedigger. Wescoe then plays his Scrivener, returning the second Aether Burst to his hand. He follows that up with the Thought Devourer, and Swan answers with a Scrivener of his own, getting the Demise back to eliminate the Devourer, as well as playing a Balshan Griffin. Swan attacks, getting Wescoe down to two, but Wescoe clears Swan's side of the table with the Aether Burst and a Patriarch's Desire, getting his first attack of the match in with his Vampire. Swan replays his Fisher, Griffin and Whelp and passes. Wescoe adds a Shade to his forces, but it is no matter, at Swan draws his Caustic Tar to finish Wescoe off.

So what looked like a very lopsided matchup in Wescoe's favor, in fact is won by Swan, due in no small part to the mana difficulties Wescoe encountered.