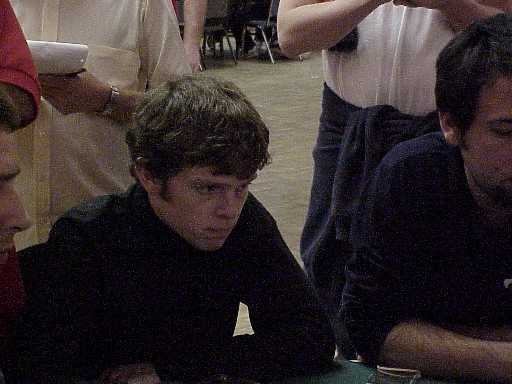 Dan Clegg and Ben Romig both had to defeat Pro Tour winners to make the top 8 - Dan won over Scott Johns, who won in New York as a part of Team Potato, and Ben beat Trevor Blackwell, who won Pro Tour Los Angeles 2000.

Clegg has been doing very well of late, finishing 14th at Worlds and then qualifying for the Masters tournament by making it to the semifinals at the team event in New York. From San Francisco, he plays occasionally with the circle from the Bay Area, which includes such Pro Tour luminaries as Ben Rubin, Casey McCarrel, and Trevor Blackwell.

Grand Prix Dallas was the first premier event that Ben Romig has participated in. A student at Rice University studying astrophysics, Romig qualified the week before in Austin.

Both players drafted decks with heavy blue-black bases, considered by many to be the best color combination. Before the draft, William "Baby Huey" Jensen approached Clegg and asked if he "knew the tech." Dan looked quizzically over and asked, "You mean draft blue?" Jensen seemed happy with this response.

Romig seemed unhappy with the way the draft progressed - he had a number of removal spells but a very weak creature base. He ended up with a black-blue deck and splashed white for Benalish Heralds and red for Plague Spores. When asked about how he felt about the match-up, Romig just shook his head. "Not very optimistic," he said. "I have some cards that might allow me to win, but my creatures are poor."

Clegg's was fairly pleased with how the draft turned out - he ended up with a blue-black-white deck with two Stormscape Apprentices, two Urborg Emissaries, a Nightscape Master, and other tempo-controlling cards. "I don't know [how the match-up will turn out]," he said. "We'll see how it plays."

Romig wons die roll to start game one. He decided to draw. Clegg mulled over his hand, and decided to Paris. He was happy with 6. Romig also mulliganed, and stayed at 6. The match began uneventfully, with Clegg stalled at 3 lands and no blue mana. Romig tried to capitalize by casting Sleeper's Robe on an Urborg Phantom, but Clegg responded with Ravenous Rats and an Urborg Emissary, both of which could block. The Phantom eventually traded with the Emissary. Clegg cast a Nightscape Master and then sighed, looking at the 4 land on his side of the board - none of which were islands. Romig slowly amassed creatures, but Clegg always seemed to have the answers for Romig and Romig was never able to mount an assault. Eventually Clegg got a second island on the board and then Nightscape Master became active. From that point on, Clegg was able to control the tempo of the game, winning with a Duskwalker and a Phyrexian Reaper.

While shuffling before game 2, Romig asked Clegg if he'd like to arm wrestle for top 4. "Yeah right," Clegg said. "I can't beat a living soul on this planet."

Game 2, Romig decided to play first. It started off much like the first game, with neither player doing much. Romig just played land for several turns and cast a Dream Thrush, After Prohibiting a couple of Clegg's threats, he said "I'm playing Draw-Go." Clegg forced out the Nightscape Master and it ruled the board. Romig was unable to deal with it and Clegg was able to control the flow of the game, bouncing any blockers that Romig had out and attacking with Phyrexian Reaper. Romig saw his threats dealt with by Probe and Exclude; at 6, he looked at his deck. "There actually is a card I could draw that could maybe do something." He drew, and it wasn't it.