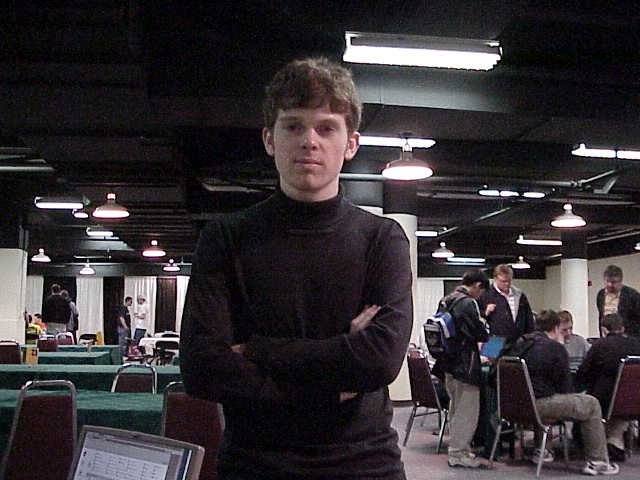 After a short delay for Clegg to finish sleeving his deck, the match got underway. Huey won the flip and cast the first spell, a Fertile Ground on a Swamp, and followed it up with a third turn Smoldering Tar. The next turn he put out Thornscape Familiar and Quirion Explorer. Clegg meanwhile played Razorfoot Griffin and a ground creature, which Huey dealt with by sacrificing Smoldering Tar and casting Tribal Flames. This left him without any removal left to deal with Clegg's Angel of Mercy, which came out on the next turn. Huey had nothing left to do, and the Angle hit for three a turn as it was backed up by first a Thornscape Apprentice and then an Obsidian Acolyte.

Huey tried to get a ground offense going with Pouncing Kavu and Mirrorwood Treefolk, managing to get in for two once with the Treefolk after being reduced to one life by the Angel. He then activated the Treefolk's ability targeting the Angel of Mercy, causing many puzzled looks as the judge read the Treefolk to see what was going on. As Huey said, "I'm activating it's ability, I'm pretty sure that's legal." He then tried to use Darigaaz's Charm on the Treefolk to kill off the Angel, but Clegg used the Obsidian Acolyte on the Treefolk, which put a stop to all that. The Angel went in for the kill, with Clegg still looking at an uncastable Rith, the Awakener, which was Clegg's only red card. Clegg had passed Agonizing Demise and Blazing Specter in his opening pack and then forced White/Green hard, and was rewarded with a third pick Rith.

In game two, Clegg 'set the goose loose' as Huey referred to it on turn two, but had to use Treva's Ruins to do it, then on turn two he put out a Quirion Sentinel and took a burn. Huey meanwhile put out Verduran Emissary and then Ancient Kavu on turns three and four. On his fourth turn, Clegg played one of his three Mountains and didn't cast anything. Huey attacked with Ancient Kavu and Verduran Emissary. Clegg double blocked the Kavu and then asked a rules question to be safe. Huey tried to use his amazing maindeck technology of Falling Timber to save the Ancient Kavu, but Clegg then used Tangle to stop the whole attack and gain time.

After the match, Clegg commented that even without the Falling Timber he would have used the Tangle. His theory was that he had Rith in his hand, and all he wanted to do was stall until it came out, following the plan that happened in the game. The next turn, Samite Elder came out to help protect the green creatures while Huey's creatures remained tapped. On turn seven, Clegg quietly played Rith onto the table as multiple spectators muttered a few things about him being 'a peeler.' It attacked and made six Saprolings, then the next turn those counted and tripled his regiment. On the third turn of the Rith era the whole army came in for the game and the match.