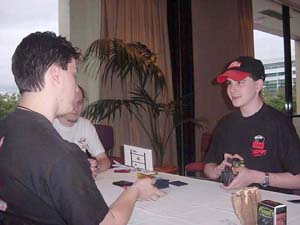 The Victorians have managed to dominate 6 of the 8 top 8 spots in the Australian Nationals this year proving them as the most magical state in Australia. With odds like this, it is no surprise when they had to fight their fellows in the first round of the top 8. Representing team Death Dealer was Andrew Grain who defeated me in the round #7 feature match sporting a G/R/U madness deck and representing Card Heaven was Dante Rosati or Scape on mIRC running a W/B/R Counter Trenches deck that the whole team Haven was running. Since Andrew and Dante have often played each other in Melbourne, both seem to be at ease and the most nervous person on the table was probably I since it is the first time I wrote for sideboard. 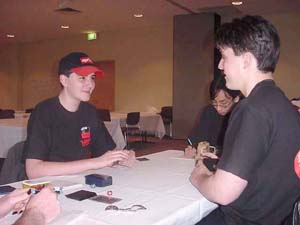 Andrew elected to go first after winning the die roll but had to take a malign due to the lack of green source. His second hand was better and came out fast with a first turn Llanowar Elf, second turn Merfolk Looter and third turn Arrogant Wurm while Dante just lay land after land. Dante took some beating from the elf going down to 18 and Repulsed the Looter to Andrew's hand instead of the Wurm to stop him filtering his hand. The Looter was recast and Syncopated but Andrew have used this time to continue the pain bringing Dante down to 14. Seeing Andrew being stuck on 3 lands and now his Looter is gone. Dante Repulsed the Wurm and continue to develop his mana base. Knowing that the longer the game goes, the more likely he his going to loose, Andrew brought out a Flametongue Kavu targeting his own elf in hopes of finishing Dante before his Goblin Trenches come out but the kavu only managed to swing once before he got fired.

An end of turn Fact or Fiction from Dante gave him a Prophetic Bolt (over 3 lands and a Memory Lapse) and Andrew, now on 5 lands try to recast his Arrogant Wurm which got duly bolted. Andrew try to regain control by bringing in another Arrogant Wurm (countered), Llanowar Elf (Fired) and Wild Mongrel (Lapsed) on various turns but Dante had all the answers with another FoF to refill his hand choosing Syncopate and Absorb over Fire/Ice, Counter Spell and Mountain. Andrew tried to dig for answers when Dante cast his Goblin Trenches but of course it was countered. Andrew concedes after that. 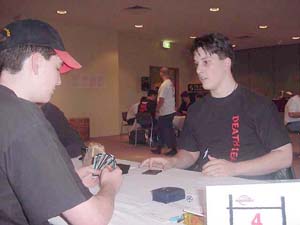 Andrew once again elected to go first on the second game bringing out a first turn Basking Rootwalla. Although Dante have a Fire/Ice in his hand he does not have the red source to cast it, yet like many "good" Magic players he managed to top deck it and got rid of the annoying lizard. Andrew having an average hand Iced Dante's Coastal Tower twice during his upkeep hoping to get some savage beats but all he managed to pull were a Llanwar elf and another Basking Rootwalla which both got fired before they can do any damage. Dante brought in his trenches for the kill and Andrew tried to recover with a Mongrel that got absorbed and an Arrogant Wurm that got bolted. Andrew made a last attempt to win by casting Flametongue Kavu which Dante responded by FoF revealing Repulse, Memory Lapse, Flametongue Kavu, Prophetic Bolt and land.