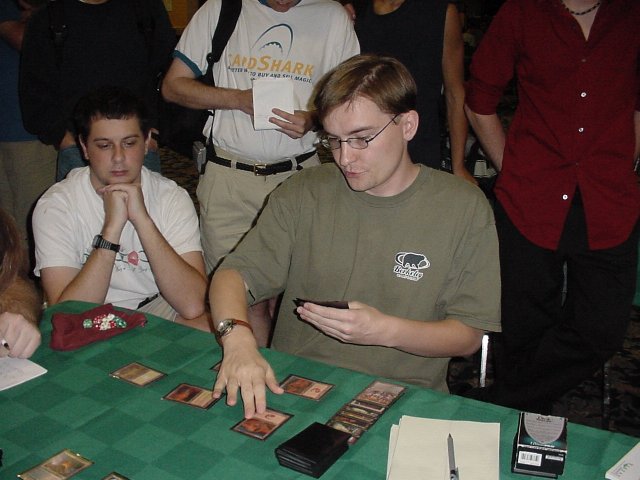 Darwin Kastle, a proud member of Team Your Move Game in Boston, is no stranger to top 8's, with numerous Grand Prix and Pro Tour Top 8's, plus a mix of championships. Aaron Knobloch is from San Francisco, where he has had a number of pro tour qualifier top 8's to his credit, but this is his first appearance with the big boys, so experience has to go to the big Bostonite.

As they shuffle up, both players spend a few minutes reviewing the deck lists of their opponents. Aaron cannot seem to understand how in the heck Kastle wins, since he only has a pair of Urza's Rages... oops, enlightenment hits. Aaron is playing a R/B/W aggro-discard deck that has carried him to third place through the swiss, and it does look to be a true pain for Kastle to win against. Kastle gives it a quick perusal, and lift's the eyebrow, mentioning that for a deck with no counter magic, it could be a pain in the a$$. Knobloch looks at Kastle sideboard and questions "No Dodecopod?" Kastle just shrugs. His top 8 appearance indicates clearly that the Emblazoned Golems in his board are the artifact creatures he wants to stick with.

Kastle kicks off the first match, but unsurprisingly Knobloch has the first creature to hit the board, a Goblin Legionnaire. He cannot however find any of his black mana, and the discard so feared by Kastle is sitting idle. Kastle Recoils the Legionnaire, and Knobloch pitches a Flametongue Kavu. Getting to see each other's decks can pay off. Knobloch knows that he won't find any targets for the big guy. After playing some additional Recoil tricks, Kastle casts Void for 2 and rips a Gerrard's Verdict from his hand in addition to killing off the pesky solider-goblin. Knobloch still cannot find a black mana of any sort, his Voice of All gets Excluded from the party, and Knobloch just keeps on taking pain from his Battlefield Forge. While Knobloch has a lot of tricks for beating control decks, they all really need black to function. He never found it in time, as Kastle's mix of card advantage and board control simply tore his hand apart and eliminated any attempts to recover the game. A Lobotomy from Kastle revealed a Vindicate and Blazing Specter (both trapped by his lack of black mana) and with Vindicates out of the game, Kastle could safely slam down a Yawgmoth's Agenda, with an Urza's Rage in the graveyard, to seal the deal.

After the match, Knobloch nodded, realizing that Kastle's deck is indeed capable of winning. It's interesting to note that while discard strategies are usually very, very effective against control decks that live or die by their hand size, Yawgmoth's Agenda somewhat offsets this.

Both players took their time sideboarding, Kastle seemed overjoyed at not needing to add in the Gainsays he had brought in for nearly every match he has played this weekend. It seems clear that Blue, whether splashed with Red, Green, Black, White or any combination there-of, is clearly the most powerful color in the format. So the question is, can Knobloch's Blue hating deck come back and win two straight or will the raw card advantage of Blue be enough to overwhelm the field today? (Every other deck is running some measure of blue) 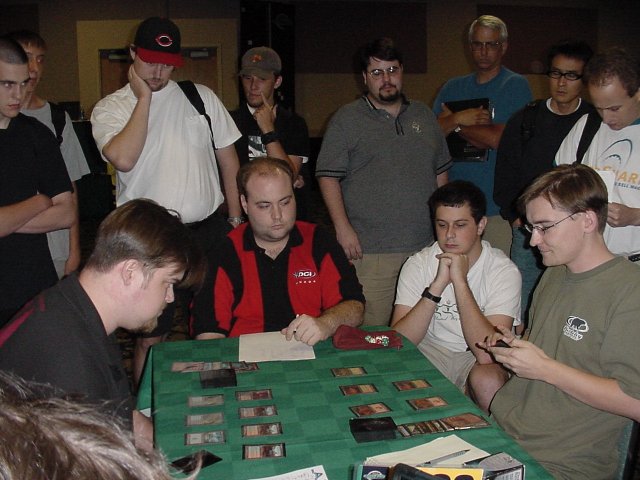 Knobloch is out of the gates and running with a turn 2 Shivan Zombie and turn 3 Goblin Trenches. Kastle had killed an awful lot of decks using the trenches over the past couple of days, but in this case, it was backing up an aggro strategy, rather than as a control deck's kill mechanism, so the results could be very different. A Gerrard's Verdict resolved and Shivan Zombie hit the table. Kastle retaliated with a Recoil on the Trenches, and a Lobotomy to get rid of the pesky thing. It revealed a hand with Blazing Specter, Trenches and Urza's Rage, but without the mana to drop the Specter. Kastle took a risk gambling on Knobloch not drawing the land to drop the Blazing one and give him a chance to untap and start Undermining threats. Knobloch's next turn revealed the swamp and Kastle is forced to scoop as his hand and life total get decimated.

As game three began, Kastle headed back into his trusty sideboard, while Knobloch seemed happy with the way his deck preformed. Actually, since he forced a concession from Kastle on turn 6, he could not really ask for much more. Both men are quiet and intense heading into this deciding match.

Kastle played first, and slowed down Knobloch from the beginning, Icing a swamp, and giving himself a chance to get Undermine mana up and running. A Gerrard's Verdict on turn 3 met with exactly that fate. Kastle had not missed a land drop yet, but a second Verdict from Knobloch resolved, snagging Void and Rage. A THIRD Verdict then got cast on the following turn, making Kastle start debating heavily (he had an Undermine and Fact or Fiction in hand). He decided to Fact or Fiction in response, turning up a mix of Exclude, Recoil, Void, Addle and a Mountain. He took the larger pile, and discarded an Addle and Mountain, giving Knobloch some life. The problem for Knobloch this time was no Red mana, and without it, he could not put any pressure on the table. He did however have his FOURTH Verdict. This one met an Undermine. Kastle let out a sigh of relief as the pair of Excludes in his hand should be able to deal with any other pesky things, such as creatures, should Knobloch ever find the red to cast them. Knobloch did his level best to try and have Kastle join him in color screw land, Vindicating a pair of dual lands, but Kastle just kept on laying more. Pyre Zombie finally came out for Knobloch (and this is usually a bomb against control), but Kastle had the best possible answer in hand... Urborg Shambler. The Zombie suddenly became too small to face life, and Knobloch was faced with a big problem. Urza's Rage deals with it, but Kastle is just sitting on an amazing amount of cards at this point, while 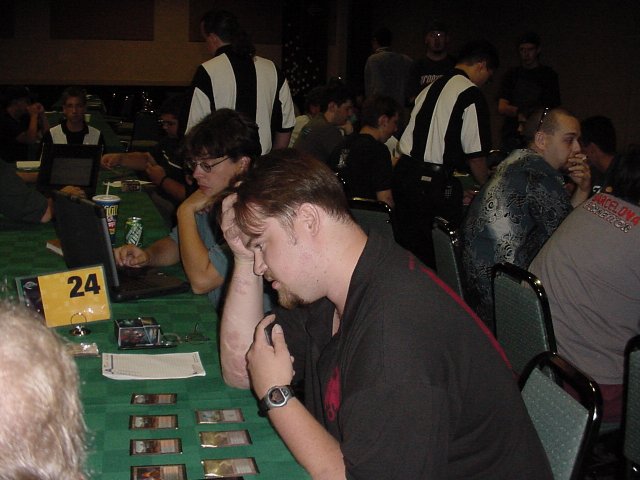 Knobloch is holding just three. An Emblazoned Golem hit the table and started swinging for Kastle, while Knobloch just kept on recurring Pyre Zombie. (He couldn't get it to hit the table, mind you, due to a fistful of Excludes, but he WAS trying hard.) At this point it became a race to the magic mana number (9 for Knobloch to start recurring and throwing Pyre Zombie at the Dome, while Kastle needed 12 to Kick up a Rage and move on to the next round). Kastle didn't feel like racing, and simply threw down a pair of Emblazoned Golems, and started smashing for about 10 points a turn without Rage. That prompted Knobloch to extend the hand and allow Kastle to move on to the next round.