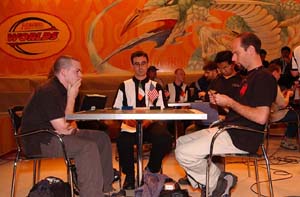 Before you consider the individual decklists, you've got to figure that David Humpherys, in untimed rounds, in a Psychatog mirror-match, is at a distinct advantage. The icon of Team Your Move Games's succes, Humpherys has many Pro Tour Top 8's to his name, and is considered one of the best minds in the game.

His opponent, John Larkin, is the reigning and three-time Irish National Champion. Larkin went 5-1 in the Standard Constructed portion of the event, despite considering it his weakest format. He's cautious about his chances in this quarterfinal match.

Humpherys, too, is wary. He originally though the matchup overwhelming in his favor, but two days of testing showed that the real advantage was in Game 1, and that after boarding it was not as skewed.

Humpherys won the flip and chose to play first. A mulligan on both sides, and they were off. Humpherys began with a pair of islands. Larkin matched him with island and Cephalid Coliseum. Humpherys passed his third turn without playing a third land. Larkin, too missed his third. They both drew and passed. Humpherys discarded Deep Analysis.

He found a third island and turned it over without playing Deep Analysis. Larkin failed to hit a fourth land and lost a Psychatog. Humpherys drew his fourth. Larkin pulled Salt Marsh. Humpherys was safe from Force Spike with Cunning Wish. Larkin let it resolve, Spiking the Opt that he fetched.

Humpherys untapped and gave it back. Larkin tried one of his two Nightscape Familiars. Humpherys wasted no time in playing Counterspell. Larkin looked at his pair of counters and thought, reluctant to use one. He went for it, tapping out. Humpherys let it resolve.

He untapped and dropped a big Fact or Fiction. It revealed Counterspell, Memory Lapse, Cunning Wish, Island and Cephalid Coliseum. Larkin shrugged and showed him lands and spells. Humpherys naturally took the lands. He played an island and gave it back.

Larkin drew an island. He hit with his Familiar and played a second one, enabling a Fact or Fiction for two mana, keeping his drawn land concealed. Knowing Humpherys's deck list, he had no fear of Force Spike. The piles were Island, Force Spike or Memory Lapse and two Repulses. Larkin was happy to take the bigger pile, dropping his island and handing it back.

Humpherys drew and though hard. Eventually he played his Salt Marsh and handed it over. Larkin drew, swung for two, and considered his options. He chose to drop a third Familiar. Humpherys responded with Fact or Fiction. Larkin, stone cold, Counterspelled. His last island enabled another Fact or Fiction for just one mana.

Larkin had a tough decision. He finally chose to pitch all his Familiars, the Salt Marsh, the Coliseum, and two Repulses, leaving himself with an island in play, two more in hand, along with two Logics, a Repulse, a Spike and a Lapse.

Humpherys played an island and passed it back. Larkin did the same. And then again. On the fourth exchange Larkin showed an Underground River. Humpherys's fifth land was Sulfur Vent. Soon they were at six land apiece, neither able to make a move. At seven mana Humpherys struck, playing another Deep Analysis from hand. Larkin let it ride. Humpherys discarded Chainer's Edict. 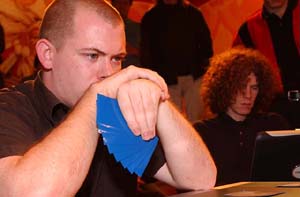 "You're attempting to kill me." - John Larkin

Larkin's hand was full of gas. Chainer's Edict and Repulse meant he could let the 'Tog slide. He baited at end of turn with Fact or Fiction, leaving three mana open. Humpherys had seven, potentially eight. Two of them bought him a Memory Lapse. Larkin spent two on Circular Logic. Humpherys let the Logic resolve, and paid two more for Counterspell. Larkin Lapsed. With just four cards left in hand, Humpherys let the stack resolve.

Larkin's Fact or Fiction showed Underground River, swamp, island, Upheaval and Cunning Wish. Humpherys split off the Upheaval. Larkin took it. With eight mana in play, he ripped Psychatog. He dropped the Big Ups with two blue and a black floating. Humpherys madnessed a Circular Logic.

"I didn't want you to have that." - John Larkin

He countered with a Logic of his own. Humpherys sacrificed his Sulfur Vent to enable Memory Lapse. Larkin stared at the board.

Larkin's Board for game 2

Larkin kicked off Game 2 with two land. Humpherys dropped an early Nightscape Familiar. Larkin was ready with Chainer's Edict. He soon hit four lands. Humpherys, with just three, tried Cunning Wish. It succeeded, and fetched Fact or Fiction. Larking played one of his own from hand.

Humpherys untapped, and then failed to play a third land.

"Oh, what did you do to my deck?" - Dave Humpherys

Larkin swapped his Spikes for Repulses in Game 3. Humpherys was going to leave his deck pat, but then made a last minute change, swapping Opt out for Chainer's Edict.

Humpherys started Game 3 with Sulfur Vent, matched by Larkin's Salt Marsh. They played lands until each had four. Humpherys played his fifth. Larkin did not. He discarded Chainer's Edict. Humpherys dropped his fourth land Lapsed Larkin's endstep Fact or Fiction.

Another turn, another Lapsed Fact or Fiction. Cunning Wish searched out a Fact or Fiction for Humpherys. Larkin decided it was no time to hold back, trying the Fact for a third time. This time it was Counterspelled.

Humpherys played his fact or Fiction. It turned over a pair of Chainer's Edicts, an island, a Counterspell and a Memory Lapse. He scored both Edicts and an island.

Larkin again failed to find land. Humpherys made no move. Larkin hit eight cards. Rather than discard he played his Psychatog. Humpherys came back with Edict, Familiar, and Psychatog, with three cards still in his hand. Larkin drew another non-land card and tried Edict. It got the Nighscape Familiar. He passed it back.

Humpherys went for Deep Analysis. Larkin Counterspelled, and why not? Humpherys re-used the Analysis and swung for one. Another attack for one and Humpherys decided it was high time to Upheaval, leaving two blue and two black floating. Larkin floated two blue and let it resolve. He tried to Countrespell the Psychatog. Humpherys Lapsed it, earning the scoop.

This time Humpherys really let his board stay as-is. Larkin put a Recoil in for a Repulse.

The first action was on turn three, when Larkin busted out an early Psychatog against Humpherys's board of two islands. It resolved. Humpherys played a Salt Marsh and passed it back. Larkin played a land, hit, and handed it over. Humpherys continued to build his mana. Larkin found no fifth land.

At five mana, Humpherys went for Chainer's Edict. It was Lapsed. Larkin drew a second Fact or Fiction. Humpherys Edicted again, still with no sixth land. Larkin Repulsed to save his 'Tog. It came down again on the following turn, still with no fifth land from Larkin. Humpherys let it resolve.

Cunning Wish at end of turn got Humpherys his Fact or Fiction. Still with no sixth land he tried his Fact or Fiction during his main phase. Larkin was ready with Circular Logic through his 'Tog. Humpherys trumped with Divert. The Fact was Disrupt and four land: TWo Underground Rivers, Darkwater Catacombs and Sulfur Vent. Larkin split off the Rivers. Humpherys took the bigger pile. He played the Sulfur Vent and passed it back. 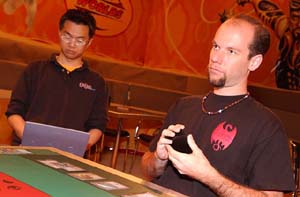 Humpherys played his seventh land and an Edict from the gravyeard. Larkin untapped and played Fact or Fiction. This time it was Repulse, Familiar, 'Tog, Catacombs and island. Humpherys split them lands and spells. Larkin took the lands. Humpherys Analyzed. Larkin flashed his back. Humpherys Lapsed. Larkin let it resolve. He tried his 'Tog. Humpherys Counterspelled.

Humpherys got busy. Nightscape Familiar and a flashed-back Analysis. Larkin with two blue up had no Counterspell. Psychatog also joined the party. Humpherys ended the turn with three mana available. He let a Larkin Edict resolve. Larkin held back on his six mana. His hand was Upheaval, Edict, Deep Analysis, and Fact or Fiction.

Humpherys swung for one. He made a replacement Familiar. Larkin tried Fact or Fiction. It was Counterspelled. He untapped, drew an island. He tried Chainer's Edict. Humpherys responded by pumping his 'Tog with Fact or Fiction and Counterspell, fetching the removed Fact with Cunning Wish. The Edict resolved, axing the Familiar.

"You've laid a land and you have one card?" - Dave Humpherys.

He wasted no time in throwing down Memory lapse. He untapped, did some calculations, and shrugged. He pushed his 'Tog into the Red Zone.

"Damage on the stack?" - John Larkin

It earned a laugh from his teammates watching in the stands. Humpherys agreed and dealt one.

"I know the math works out this way." - Dave Humpherys

He played Upheaval and left two black and a blue in his pool. He played Psychatog and sorted out his discards. Larkin extended the hand.