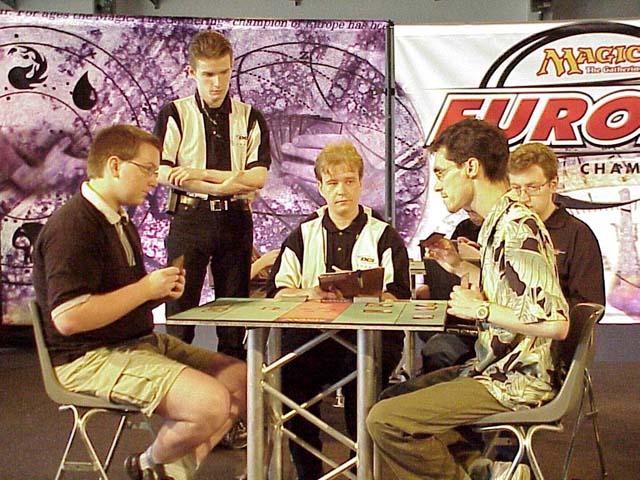 Montreuil won the die roll - an important advantage for a land destruction deck. "This one's for Switzerland," Montreuil proclaimed knocking at the top of his deck. "Are you sure it's not for Canada?" I could not resist asking. "It can't be. The guys back at the gaming club in Switzerland would kill me."

Montreuil started out by casting Kris Mage. Thoren made an aggressive but very viable play of drawing his eighth card and proceeding straight to the discard step in order to discard a Nether Spirit. Aware that he would now be unlikely to win on creature damage, Montreuil played aggressively, casting a Volcanic Hammer at his opponent. He then used Dust Bowl to destroy a pair of Thoren's lands, able to keep him low on mana. Montreuil was worried about being wrecked by Tsabo's Web and chose to throw away his Rishadan Port rather than one of the Mountains. This cost him, as Thoren played out several basic lands.

Goblin Raider resolved, allowing Montreuil an option of using his Seal of Fire to get rid of Nether Spirit and attack for three. At this point, his entire game plan was to burn his opponent out if at all possible. Thoren's plan on the other hand was to ride the card advantage as far as possible, while remaining at a reasonably high life total.
Dromar the Banisher entered play, with Thoren going down to ten life points and tapping out to cast it. Montreuil's current hand included Shock, Volcanic Hammer, and Ghitu Fire. He now had to choose between trying to kill Dromar, thereby also turning Nether Spirit into just another Grey Ogre, or try to burn out his opponent. He went for killing the Dragon Shock and Volcanic Hammer did five points of damage to Dromar, with Kris Mage finishing it off. Subsequently, Thoren traded his Nether Spirit in combat for Goblin Raider.

On his turn, Thoren used Recoil to send Kris Mage back to its owner's hand. Montreuil, whose only other card in hand was Ghitu Fire, chose to discard the direct damage spell in favor of keeping the Kris Mage. The creature was countered next turn, with the game looking very good for the control player who now stabilized at nine life. Montreuil went on to draw some lands, Urza's Rage, and Ghitu Fire Thus, he was forced to give his opponent plenty of time to draw lands and more countermagic. For a number of turns nothing happened. Eventually, Thoren cast Tsabo's Web, catching his opponent Rishadan Port tapped and making certain that Montreuil's Dust Bowls would become one-shot deals.

Kris Mage resolved, but Thoren responded in kind, by casting a monstrous Fact or Fiction. He revealed 2 Counterspells, Memory Lapse, Probe and Dromar's Cavern. In the split, Thoren got Cavern, Counterspell and Memory Lapse Wrath of God took out Kris Mage, leaving Montreuil in a virtually unwinnable position. His only chance would be to play twelve lands and successfully cast Urza's Rage with kicker, while his opponent would have no Dromar's Charm available to gain five life with - a highly unlikely scenario. Probe with kicker forced Montreuil to cast one of his Rages without kicker rather than discard it, and end up with zero cards in his hand.

"This is going to be a long one, I think I am going to have to deck him." Montreuil was only half joking, after nothing much happened over the next several turns.

Thoren was firmly in control of the game, but his library was starting to look rather thin and there was still no win condition in sight. Having used multiple Probes, Thoren was now discarding his Fact or Fictions. Finally, Thoren cast a Nether Spirit. With two other creatures in the graveyard a Spirit would have to go all the way without getting killed once - but Thoren was in total control of the game with Montreuil holding no cards in hand. Thoren cast a second Nether Spirit with nine cards left in his library. He was able to protect the two Spirits over the course of the next five turns, dealing just enough damage at the eleventh hour - the game ended with something like four cards in Thoren's library.

Both players kept their opening hand, and Montreuil started with a true Sligh draw. He cast Kris Mage on turn one, Goblin Raider on turn two, and Chimeric Idol on turn three before his opponent had the chance to counter anything. Thoren cast Tsabo's Web on turn two, but the red mage had no non-basic lands at the moment.

Facing so much early damage, Thoren had to find some answers quickly. He cast Probe without kicker, discarding Fact or Fiction and Memory Lapse. This helped him cast Wrath of God on the following turn. With Thoren at seven life, Montreuil cast a Rage Weaver. Now his opponent would have to find answers to both an artifact and a creature very, very quickly. Montreuil cast Urza's Rage and attacked for the kill, but Thoren was able to buy himself another turn by gaining five life with Dromar's Charm. It only bought him a single turn - at three life points and facing a pair of angry creature, Thoren picked up his cards.

A pair of Kris Mages entered play right away, and began chipping away at Thoren's life total. Montreuil was able to keep his opponent down by casting a Stone Rain and using Dust Bowl to stunt Thoren's mana development. While Montreuil was able to keep his opponent out of black mana during a large portion of game 1, he now succeeded at destroying all of his opponent's white mana sources. Goblin Raider joined the team, speeding up the damage. Jensen's Duress found nothing but thee Mountains in his opponent's hand. Unable to cast Last Breath or Wrath of God, Jensen went down several turns later, despite Montreuil casting four spells throughout the entire game.

Once again, Montreuil managed to pull off his Sligh draw. Kris Mage, Firebrand Ranger, and Chimeric Idol made it into play over the course of the first three turns. Thoren played a pair of Tsabo's Web hoping to find both Wrath of God and a second source of white mana. In response to Montreuil destroying Dromar's Cavern with his Dust Bowl, Thoren used the sideboarded Recoil to bounce an Idol.

Down to ten life, Thoren tapped out to cast Wrath of God. He had a Dismantling Blow for the Chimeric Idol and used Probe to make Montreuil discard the rest of his hand (which featured nothing but lands). The only threat remaining was Kris Mage, with Thoren at six life points Probe allowed Thoren to discard a Nether Spirit. But Kris Mage could use its ability to deal the last few points of damage.
Before he got too low on life, Thoren opted to gain five with Dromar's Charm. Just in time, too - his opponent was holding an Urza's Rage. Dromar entered play next, suddenly leaving the Swiss player only a handful of turns to win the game with Fact or Fiction. This provided Thoren with a Counterspell and Last Breath, which he could use on his own Nether Spirit if needed, sealed the fate of the game.

Montreuil did not have a fist turn play in the final game of the match, but he did have several two casting cost creatures. Good thing too, as he missed his third land drop. Goblin Raider made it into play, but Firebrand Ranger was countered. Thoren tapped out to destroy the Goblin via Dromar's Charm, thus allowing his opponent to successfully Stone Rain a Plains. Dust Bowl targeted an Underground River, and a mana-hosed Thoren used Recoil to send it back to his hand, discarding a Counterspell

Thoren was using his Dromar's Charms aggressively, taking out the small creatures his opponent was casting and tapping out main-phase. This allowed Montreuil to sneak a Chimeric Idol into play. The Idol got removed via Dismantling Blow, but Montreuil managed to remove his opponent's only source of white mana to make up for it.

Mogg Sentry and Kris Mage made it into play. Montreuil emptied his hand by casting two Volcanic Hammers at his opponent, then attacked, bringing Thoren down to six life points. On his turn, Thoren tapped two Underground Rivers and went down to four life to summon a Nether Spirit.

Montreuil was going to the dome at this point. He began using Kris Mage to throw cards at his opponent Thoren failed to draw Last Breath, Wrath of God, or Dromar's Charm. Four turns later, Montreuil advanced to the semi-finals.