Willy Edel of Brazil is making his fourth Pro Tour Top 8 appearance today. His first appearance on the Sunday stage was at Pro Tour Charleston in 2006 with team mates Paulo Vitor Damo da Rosa and Celso Zampere Jr. The format at that time was Ravnica Block Constructed, and now he's looking for his Return to Ravnica to lead him to victory this weekend.

However, his opponent, ChannelFireball team member David Ochoa, had no intentions of making Edel's path to victory easy. Known as a regular contributor to the community's online content and as one of the players who puts in a ton of work to help the team, today marks his first Pro Tour Top 8 appearance. Now that he's made it into Sunday's elimination rounds, he's just three match wins away from taking home the title.

Both players were piloting Jund, but both Edel and Ochoa have their different takes on the deck. Would more instant removal and Thrun, the Last Troll serve the Brazilian well, or would Deathrite Shaman and Liliana of the Veil bring victory to the ChannelFireball team member? 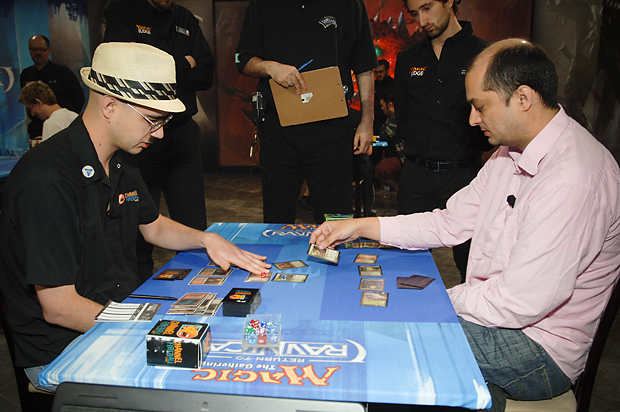 Willy Edel makes his return to the Sunday stage, while David Ochoa is looking to go the distance in his first Pro Tour Top 8.

Ochoa started off slow, despite winning the die roll, while Edel led off with Dark Confidant on turn two. Ochoa was quick to dispose of the Ravnica: City of Guilds rare with Liliana of the Veil, which used its -2 loyalty effect immediately.

Edel used Treetop Village to take out Liliana, while Ochoa untapped and unloaded with Tarmogoyf and Deathrite Shaman, passing back to Edel, who had no fourth land and no action on his next turn.

Ochoa wasted no time in pushing with Raging Ravine and Tarmogoyf on Edel's next turn for 7, as Edel used Jund Charm to take out Deathrite Shaman. Edel untapped and took the chance with Bloodbraid Elf, finding Kitchen Finks.

A Thoughtseize from Ochoa revealed the reason for Edel's slow start: Thoughtseize, Inquisition of Kozilek, Bloodbraid Elf, Jund Charm, and Thrun, the Last Troll. Thrun, the Last Troll hit the graveyard, and Tarmogoyf attacked in. Edel chump blocked with Kitchen Finks, as the creature persisted back into play and gave the Brazilian 2 more life, bringing him to 11. A post-combat Bloodbraid Elf found Geralf's Messenger, dropping the Brazilian back to 9.

Edel used Inquisition of Kozilek to discard Ochoa's Terminate, and followed up with Thoughtseize to rid him of his last card in hand: Bloodbraid Elf. Tarmogoyf gave Edel a much needed blocker, but he was going to need some help against Ochoa's creatures and Raging Ravine, which had one counter already. 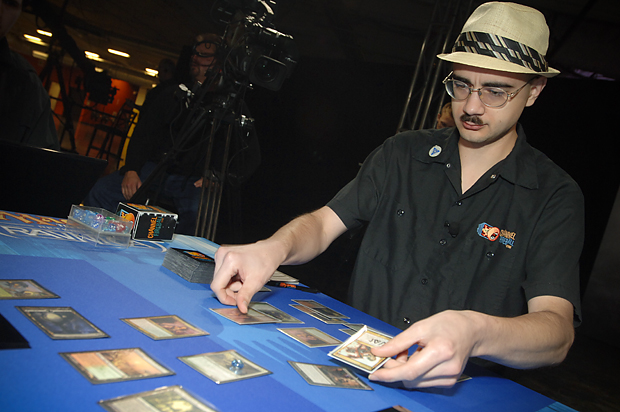 Ochoa's in-hand spells did not remain there for long.

Ochoa woke up his land and sent in the team, losing his Raging Ravine to Tarmogoyf, trading Bloodbraid Elves, and bringing Edel to 4. Edel had a Kitchen Finks to give him some additional life, but Geralf's Messenger would prove to be a problem. Edel blocked with his creatures, equalizing Geralf life-loss for Kitchen Finks life gain, but he lost his Tarmogoyf to a post-combat Lightning Bolt.

Bloodbraid Elf gave him some more life in the form of Kitchen Finks, which teamed up with Bloodbraid Elf to take out Tarmogoyf, while the persisted Finks jumped in the way of Geralf's Messenger. Edel went onto the offensive with Kitchen Finks, putting Ochoa to 16, and a follow-up Tarmogoyf gave him a sizable blocker. Ochoa, unable to attack through, passed back with Geralf's Messenger untapped, but lost the 4/3 zombie to Lightning Bolt. Attacks put Ochoa to 9, and another Tarmogoyf put Edel way ahead.

Both players sideboarded and shuffled up quietly as they prepared for a very tense Jund mirror match.

Ochoa led with a turn one Inquisition of Kozilek, revealing a hand of Treetop Village, Wurmcoil Engine, Abrupt Decay, Lightning Bolt, and three other lands that could get Edel all the mana he would need. Abrupt Decay hit the graveyard. Ochoa went to 19 and led into Dark Confidant, which ate a Lightning Bolt from Edel on the second turn. 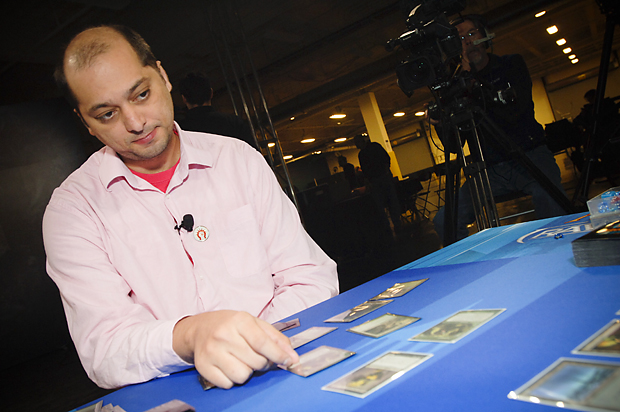 You have some monsters attacking me? I'm not impressed.

Ochoa was out of action at that point, while Edel played Kitchen Finks on turn three. "Bob," Ochoa announced on turn four, playing Dark Confidant with two other lands untapped. Edel sent the Finks in, and blew away Dark Confidant with a second Lightning Bolt. Ochoa had a Tarmogoyf to follow up, which left Edel unable to attack through the monster. Thoughtseize on the next turn got rid of Edel's Wurmcoil Engine, preventing the monstrous artifact creature from hitting play, but the ChannelFireball team member was still unable to push through Edel's Kitchen Finks, Raging Ravine, and Treetop Village.

A second Tarmogoyf threatened to change that, as Edel lacked any sort of action. One of the Tarmogoyfs attacked in, putting Edel to 16. Edel drew and passed, with plenty of mana untapped. Both Tarmogoyfs came in against the Brazilian player. Edel woke up Treetop Village and double blocked one with Kitchen Finks and the land. Ochoa used Lightning Bolt on the Kitchen Finks, but Dismember allowed the Treetop Village to take out the once-large creature.

Edel went on the offensive in the next turn with Raging Ravine and Kitchen Finks, putting Ochoa to 6. A Treetop Village lying in wait with Raging Ravine forced Ochoa to go with Bloodbraid Elf, which found... a not-so-useful Thoughtseize, which he chose not to cast. Ochoa went to 1 on the next attack, and a turn later had him picking up his cards for the third game.

Ochoa was on the play for the third straight game, with both players once again keeping their hands. Ochoa came out with a lightning fast Deathrite Shaman into Liliana of the Veil. She immediately went to 4 loyalty to force Edel into discarding, as Ochoa pitched Ancient Grudge and Edel discarded Thrun, the Last Troll.

Edel's first play was Dark Confidant, forcing Ochoa to use Liliana's -2, as Deathrite Shaman attacked for 1. Tarmogoyf followed, while Edel was content to gain some life with Kitchen Finks. Liliana lost her last two loyalty counters to make Edel sacrifice the Kitchen Finks,, while Deathrite Shaman made sure the Kitchen Finks stayed dead before it persisted back onto the battlefield. Tarmogoyf attacked as a 4/5, and Ochoa passed back after playing Raging Ravine. 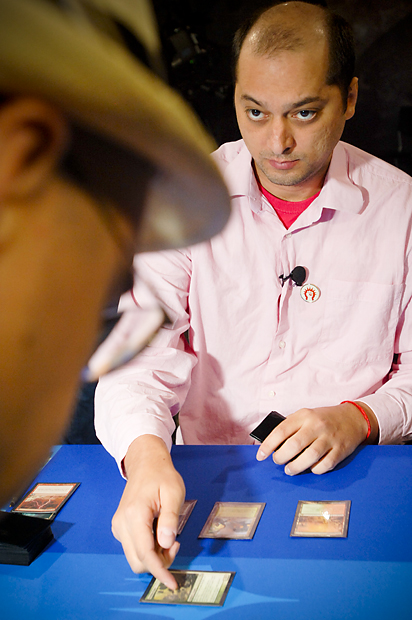 Edel fights back from a brutal start.

Edel quickly untapped for Bloodbraid Elf, which found the Brazilian pro a Lightning Bolt for Deathrite Shaman. Bloodbraid Elf attacked, putting Ochoa to 17. Ochoa attacked back with Tarmogoyf, putting Edel to 10. Then, he played a fifth land and cast Batterskull.

Edel matched Ochoa's Raging Ravine after playing out Dark Confidant and Tarmogoyf, but Terminate took down Edel's 'Goyf. Edel quickly traded his remaining creatures for Tarmogoyf, going to 6 from the Batterskull attack. Ochoa sent the germ token in, Edel blocked, and Olivia Voldaren followed for Ochoa to finish the lhurgoyf off. Edel had Phyrexian Metamorph to take out the legendary creature, but an attack from Raging Ravine wrapped things up.

Edel's untapped turn one Blackcleave Cliffs let Ochoa Lightning Bolt Ochoa's turn one Deathrite Shaman. Edel then played a Dark Confidant, as Ochoa was quick to Terminate any notion that it would reach Edel's upkeep. Edel had no action on turn three, while Ochoa played a 3/4 Tarmogoyf. Edel again had no spells, as Ochoa attacked in and followed up with Fulminator Mage on Edel's Overgrown Tomb. Now, it looked as if Edel would spent even more turns passing with nothing to do.

Without anymore lands, Edel could only look on as Tarmogoyf kept attacking him, as a second one joined Ochoa's side. Edel found a fourth land, but still lacked green mana to cast the spells that could get him back into the game. After a few turns of being hit by the two Tarmogoyf, Edel scooped up his cards for the fifth and final game.

Ochoa played a Forest from hand and quickly cast Tarmogoyf, which was almost immediately Dismembered by Edel, who added Treetop Village to his board. 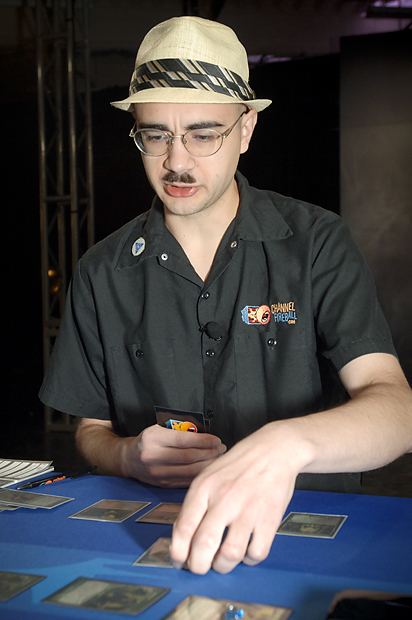 Ochoa bounces back from a rough start to the match.

Ochoa went to 17 to Thoughtseize Edel's remaining card, Batterskull, while a new 6/7 Tarmogoyf gave Ochoa a massive threat. Edel had a Treetop Village and Raging Ravine, but with plenty of spells and the giant Tarmogoyf, Ochoa was in the driver's seat. Dark Confidant also threatened to give Ochoa a stream of cards.

Edel drew and played Thrun, the Last Troll, which would provide him with a solid blocker. However, with Deathrite Shaman now in play, Ochoa could off-set any life loss from Dark Confidant's extra cards. As Edel's deck continued to cough up lands, Ochoa went aggressive with his creatures and Raging Ravine. Fulminator Mage and Lightning Bolt disposed of Edel's Raging Ravine and Treetop Village, as Edel dropped to 5.

Edel untapped, drew, and cast Bloodbraid Elf. It found an Abrupt Decay, but it was too little, too late. Dark Confidant's extra cards proved too back-breaking, Deathrite Shaman gave Ochoa a form of direct damage, and Lightning Bolt on the next turn sealed the deal. 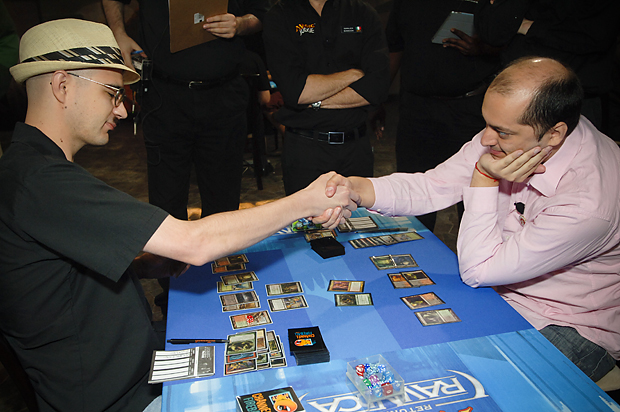 Edel was so close, but he ultimately succumbed to Dark Confidant providing Ochoa with the necessary cards to win.

David Ochoa wins 3-2 and advances to the Semifinals!