In 2011 Fabian Thiele has finished in the Top 20 at Pro Tour Paris and has earned himself a Top 8 berth here at Pro Tour Nagoya. But Thiele isn't a long-time professional Magic player who travels to every Grand Prix and spends forty hours a week honing his skills on Magic Online—rather, Fabian Thiele is a self-described casual player competing in only his second Pro Tour!

Going into this weekend, Gaudenis Vidugiris, a lawyer who currently resides in New York, was on the short list of players whose names would come up when discussing the best player without a Pro Tour Top 8.

Despite having a job that requires a serious time commitment, Vidugiris is an incredibly dedicated Magic player who will do whatever it takes to play in a Grand Prix or a Pro Tour. Because he can't take much time off from work, Vidugiris will frequently take red-eyes to compete in European Grand Prix, arriving at the tournament site mere hours (or minutes) before the event starts, catching up on some much-needed sleep during his byes.

While these two players have taken very different roads to get here, they both find themselves just three matches away from becoming a Pro Tour Champion.

Thiele started things off with a Myr Sire and a Blind Zealot while Vidugiris' first play of the game was a turn three Strata Scythe, exiling a Mountain. On Vidugiris' next turn, Glint Hawk returned Strata Scythe, which he then recast—this time choosing to exile a Plains.

Vidugiris attempted to equip his Glint Hawk with Strata Scythe, but Grim Affliction took it out. Vidugiris cast a Leonin Skyhunter, but that too fell at the hands of Blind Zealot. 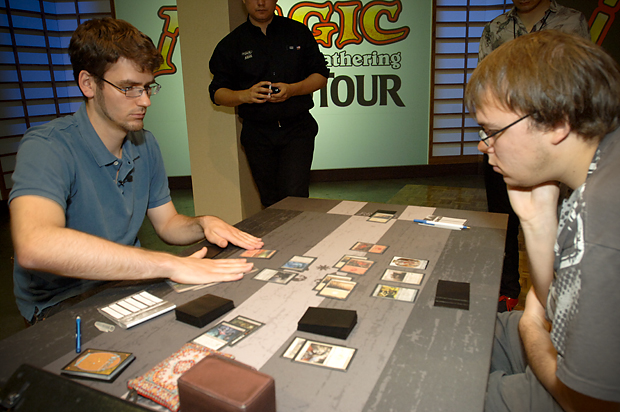 Their philosophies are different, but both Fabian Thiele and Gaudenis Vidugiris are undeniably highly skilled players.

Thiele cast a Reaper of Sheoldred followed by a Nested Ghoul, while Vidugiris deployed a Master Splicer to restock his board. He followed that up with a Leonin Relic-Warder which removed Myr Sire and allowed Vidugiris attack Thiele down to 13 with a Strata Scythe–equipped golem.

But just as Vidugiris thought that he was starting to get somewhere, Thiele cast Sheoldred, Whispering One.

Vidugiris needed to figure out a way to win fast, or else fall at the hands of his opponent's game-breaking rare. With that in mind, Vidugiris used Remember the Fallen to get back a Leonin Skyhunter that he immediately recast.

Leonin Skyhunter then picked up a Strata Scythe, allowing Vidugiris to attack for 6 in the air, knocking Thiele down to a precarious 7 life.

At this point Vidugiris had an important decision to make.

With a hand of Inquisitor Exarch, Shatter, and Porcelain Legionnaire—and a board of four Plains, two Mountains, a 6/6 Leonin Skyhunter, and a 3/3 Golem token—Vidugiris would be able to kill Thiele on his next turn provided that Thiele didn't cast anything to stop the Leonin Skyhunter.

If Thiele—whose board was highlighted by a bunch of Swamps, a Mountain, an Iron Myr, a Sheoldred, Whispering One, and a Blind Zealot—drew something like Shatter or Spread the Sickness, then Thiele would (almost certainly) win regardless of what play Vidugiris made.

If Vidugiris used his Shatter to destroy Thiele's freshly cast Iron Myr, that would prevent Thiele from being able to cast any double-

spells such as Turn to Slag or Into the Core he might be holding (unless he drew a Mountain)—but, thanks to his opponent's Blind Zealot, it would also leave Vidugiris vulnerable to a subset of removal spells such as Gremlin Mine, or anything that could deal a single point of damage (or reduce a creature's toughness by 1), which he would not be vulnerable to if he cast his Porcelain Legionnaire.

If Vidugiris didn't think that his opponent had anything in his hand, then it would definitely be correct to cast the Porcelain Legionnaire, as that would give his opponent fewer outs. However, Thiele hadn't had any opportunity to cast double-

spells before this point (since his Iron Myr had just come down on the previous turn).

After weighing his options for a while, Vidugiris opted to cast the Porcelain Legionnaire. This decision backfired the next turn when Thiele used a Turn to Slag to take out Leonin Skyhunter and Strata Scythe. From that point on, Vidugiris could do little more than sit and watch as Thiele poisoned him to death over the next few turns.

Vidugiris chose to play first, but had to mulligan to six. Vidugiris missed his third land drop for several turns, but Thiele also found himself stuck on a mere three lands. 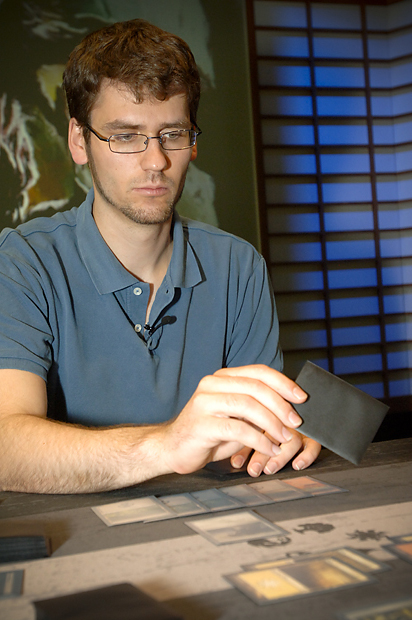 Thiele shows no sign of letting the pressure get to him.

Despite being stuck on three lands, Thiele was able to build up his board with Vulshok Replica, Blind Zealot, Gremlin Mine, and Tumble Magnet. Meanwhile, Vidugiris could only cast a couple of Immolating Souleaters and a Glint Hawk.

Grim Affliction took out Vidugiris's Immolating Souleater, but a Perilous Myr threatened to make things a bit complicated for Thiele, who was trying to beat the mana-screwed Vidugiris quickly. Nonetheless, a couple of Tumble Magnet activations allowed Thiele to attack Vidugiris down to 10.

Vidugiris finally drew his third land and sacrificed his Perilous Myr to Kuldotha Rebirth, destroying Thiele's Blind Zealot, before deploying a Leonin Skyhunter to his suddenly impressive board. Glint Hawk attacked, dropping Thiele to 14, and Vidugiris passed the turn.

At the end of Vidugiris's turn, Instill Infection took out one his Goblin tokens, and Tumble Magnet tapped another.

Thiele untapped and cast a Grim Affliction to take out Leonin Skyhunter and add another counter to his Tumble Magnet—a counter that he then used to tap Vidugiris's last untapped creature, thus setting up an attack with Vulshok Replica that knocked the American down to 7.

Nested Ghoul came down for Thiele, and Vidugiris kept attacking with his Glint Hawk, knocking Thiele down to 12.

Thiele used his last counter on his Tumble Magnet to tap down his opponent's freshly cast Tine Shrike, then cast and activated an off-color Flight Spellbomb to give Nested Ghoul flying. A Vulshok Replica activation later and Thiele was up two games to none.

Vidugiris again chose to play first in Game 3, and again had to mulligan. Vidugiris kept his six and cast a first-turn Gitaxian Probe that revealed Thiele's hand of Flight Spellbomb, Gremlin Mine, Clone Shell, and four lands. 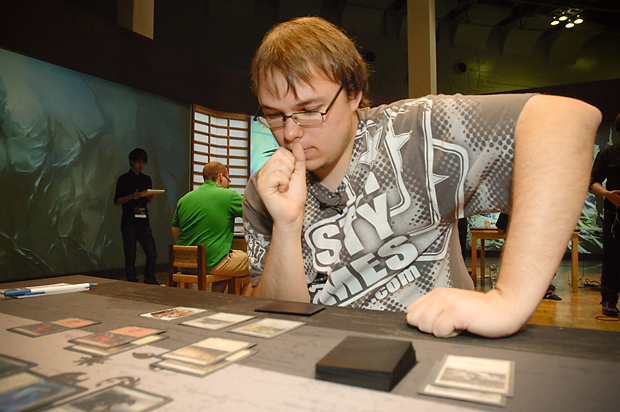 Vidugiris is no longer on the list of the best players without a Pro Tour Top 8, but can he get further than that?

Vidugiris cast a postcombat Immolating Souleater, and Thiele thought for a bit before ultimately deciding not to destroy anything with his Gremlin Mine. Thiele then tapped out to cast Nested Ghoul and passed the turn back to Vidugiris.

Vidugiris, who now had an on-board kill, spent some time counting, and considering whether or not his opponent was trying to trick him into walking into a Gut Shot, before using Blinding Souleater to tap Thiele's only blocker.

"Am I dead?" asked Fabian, who was visibly upset about his mistake.

"Looks like it," said Gaudenis, who then attacked for exactly lethal by paying 16 life and tapping two Mountains to pump his Immolating Souleater up to an 11/1.

Thiele chose to play first, and both players kept their opening hands for the fourth game. Gaudenis played a first-turn Memnite and immediately sacrificed it to Kuldotha Rebirth.

"Not the card I wanted to see," said Gaudenis.

Vidugiris attacked, trading a Goblin token for Myr Sire (which left a Myr token behind), and then cast an Immolating Souleater. Thiele cast and activated Nihil Spellbomb before passing the turn back to Vidugiris. Shatter destroyed Thiele's Myr token, and Vidugiris paid 14 life to pump his Immolating Souleater and knock Thiele down to 7. 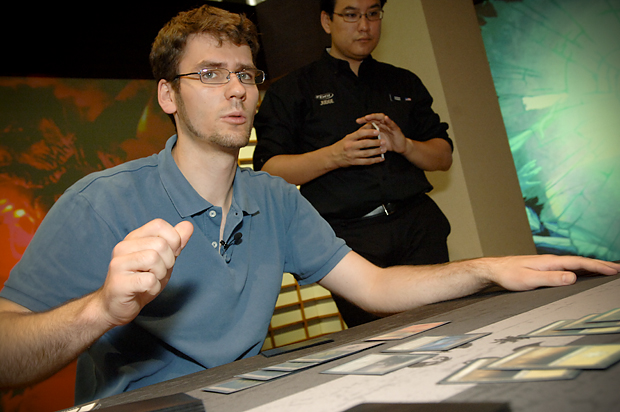 Thiele missed his fourth land drop, contenting himself to cast a Gremlin Mine that he immediately used to take out Immolating Souleater.

However, Vidugiris's two Goblin tokens kept biting away at Thiele, knocking the Deutschlander down to five.

Thiele failed to draw a land over the next couple of turns, and the players were off to a deciding Game 5.

Fabian chose to play and kept his opening seven while Vidugiris had to start off his deciding game with a mulligan.

A Myr Sire for Vidugiris was answered by a Blind Zealot from Thiele. But Vidugiris then looked to make up for his mulligan by casting an Ichor Wellspring and immediately returning it to his hand with Glint Hawk.

Blind Zealot got sacrificed to take out Vidugiris' flier, and Thiele cast his backup Blind Zealot along with a Gremlin Mine. Instill Infection then took out an Immolating Souleater, and from that point on it seemed as though Vidugiris was out of gas. Vidugiris cast a Memnite and a Banishment Decree to keep Blind Zealot off the board for a little while, but things clearly weren't going to well for the American.

A couple of turns later a Kuldotha Flamefiend cleared Vidugiris's already light board, and while a Turn to Slag bought Vidugiris a bit of timem he didn't manage to draw anything during those turns.

Fabian Thiele defeats Gaudenis Vidugiris 3-2 and advances to the semifinals!