It was a battle of masters in the Quarterfinals at Pro Tour–San Juan. Magic Online titan and part-time mountain man Brad Nelson, fresh off his win at Grand Prix–Washington, faced down Guillaume Matignon, a man who's a fresh face in Magic but who has won major events in other TCGs.

As Nelson sat down for deck construction, the first words out of his mouth were, "Well, we're making a quick exit here," laughing as he said it. Early in pack 1 he had negotiated himself to a solid red base, but none of the cards coming to him contributed to a game plan he liked. As a result, he wound with a deck based around Eldrazi Spawn that capitalizes on them with Raid Bombardments and Lavafume Invokers. He was far from happy and gave the quote of the tournament: "If I win the PT with this deck, I'm going out and buying a pimp cane." 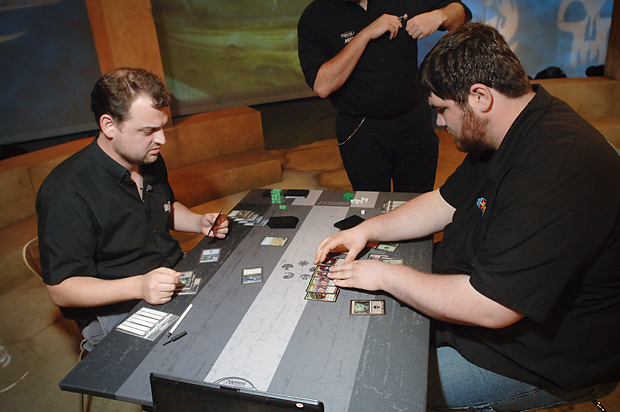 Brad Nelson, right, expects a quick exit based on his draft, but Guillaume Matignon doesn't get cocky.

Matignon, on the other hand, was very pleased with how his draft had gone, and while he shied away from calling his deck anything more than "good," his blue-black deck with levelers, Venerated Teachers, and Training Grounds looks like a beating.

Matignon chose to play and led out with Skywatcher Adept and Lighthouse Chronologist. After Nelson made an Overgrown Battlement, Matignon dropped Venerated Teacher and flew over for two with the Adept. Nelson untapped and tapped three, but it wasn't for Staggershock. He cast Lavafume Invoker and passed. Matignon Vendetta'd the Wall, put the Adept to max level, and swung in for 7. Nelson declined to block and dropped to 10.

Nelson made a Prophetic Prism and traded his Invoker for the Teacher on Matignon's next attack, falling to just 5 life. Matignon passed his turn without tapping his blue mana to level his Chronologist, a sure sign of what was to come. Nelson frowned and tapped out for Emrakul's Hatcher, and Matignon showed him the Deprive to send them to Game 2.

Nelson chose to draw for the next game. Matignon opened with Training Grounds and Champion's Drake, needing only a leveler to get things going. Nelson played out his lands and waited. Turn three for Matignon brought an unexciting Venerated Teacher. Nelson still had no play.

Matignon got in for 3 and cast a second Teacher. Nelson made no move on his four lands. Matignon's attack put him at 11, and Matignon passed the turn with no play. Nelson finally got out Emrakul's Hatcher, gumming up the ground. Matignon flew over and cast Zof Shade, an absolute beating with Training Grounds.

Nelson though for a moment, then swung in with his Hatcher. Matignon obliged him by doubling up with his Teachers, and Nelson cast Staggershock, setting up the three-for-one. Matignon attacked with Zof Shade and Champion's Drake, and one of the Spawn distracted the Shade.

Matignon was still stuck with just four land in play. Nelson's Staggershock finished its work by taking out the Drake, and he played Dread Drone. Matignon's Zof Shade ate a Spawn, and another fell to Bala Ged Scorpion. Matignon had three cards in hand. 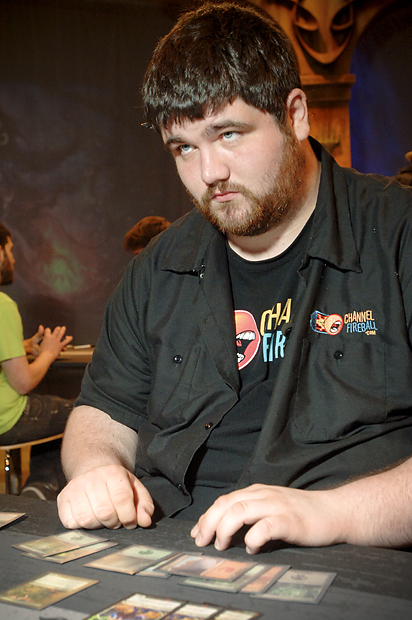 It's hard out there for Brad Nelson.

Nelson played land number eight, then cast Valakut Fireboar and Brood Birthing, going up to five Spawn on the battlefield. Matignon had a second Scorpion to kill the Fireboar and his Shade kept up its work. Nelson needed more offense but had only an Overgrown Battlement.

Matignon played Guul Draz Assassin, quickly leveling it twice. Nelson had Forked Bolt to get rid of it on his turn, and not a moment too soon. See Beyond gave Matignon another Swamp.

Nelson frowned in thought, eventually playing Lavafume Invoker and Raid Bombardment, with just two Spawn left on the battlefield. One of them dove in front of the Shade, and Vendetta took care of the Invoker. Nelson had more goods coming, though, and tapped eight for Ulamog's Crusher. Unfortunately for him, Matignon's shortness on land meant he was long on action, and Narcolepsy put the Crusher to bed.

Skittering Invasion from Nelson wasn't quite what he wanted, and Matignon laughed that it was taking too long to battle through his 0/1s. His deck must've heard him, because his next play was Frostwind Invoker. Combined with the Shade and Training Grounds, it was well into lethal damage. Nelson had Essence Feed, but it wasn't enough.

Nelson put Matignon on the play for Game 3. He watched as Matignon played Null Champion on turn two, then Training Grounds on turn three, powering it up to level 2 and hitting for 4. Nelson took for then got rid of it with Heat Ray. Matignon played See Beyond and Champion's Drake. Nelson went up to five land with Ondu Giant.

Matignon hit for 1 in the air and then played Zulaport Enforcer, levelling it once and threatening big damage the following turn. Nelson played Kozilek's Predator and passed, but responded to the Enforcer moving towards level three with a Staggershock on the Drake. The Enforcer brought him down to 11.

Nelson played a Lavafume Invoker and passed with seven lands on the board. Matignon had Induce Despair (showing Bala Ged Scorpion) to be rid of it, and the Enforcer took Nelson down to 5. Nelson's monsters brought Matignon to 6, and then Essence Feed drained him to 3, putting Nelson out of the range of the Enforcer. 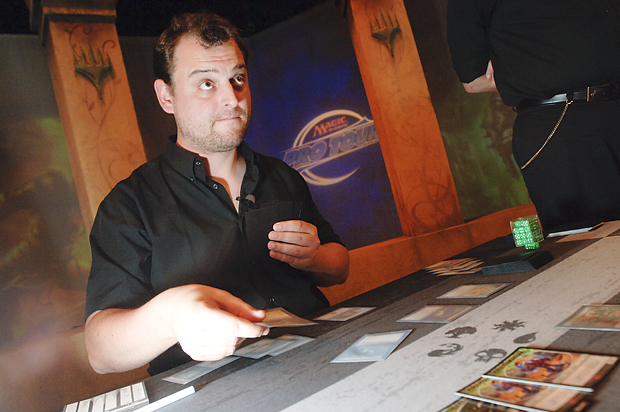 What's in my hand? I have it. It's a Deprive for that spell you cast.

Matignon drew and attacked. He cast Cadaver Imp and left two Islands untapped. Nelson, asked "You have a Deprive?" Matignon flashed it. Nelson took a look at his top card, revealing it and the card in hand as lands, then offered his hand in concession.

Guillaume Matignon defeats Brad Nelson 3-0 and advances to the Semifinals!