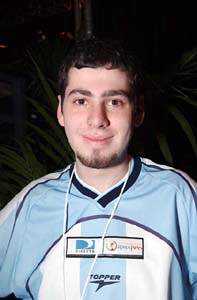 Playing in a Pro Tour Top 8 is a first for both of these players. Krouner has been playing for years and has recently put together a string of solid finishes, and represents one of only two Americans in the Top 8. Diego Ostrovich may be new to the Pro Tour Top 8 stage, but he is no stranger to high-pressure matches. He is the current Argentinean National Champion, and came in second in last year's Latin American Championships.

Krouner had a first turn Birds of Paradise, and played another turn two, but missed his second land drop. Chainer's Edict killed one of the Birds, and Krouner summoned Merfolk Looter. Repulse sent it back, but Krouner drew another land next turn and started to rebuild, replaying the Looter, and summoning Wild Mongrel on the following turn. Ostrovich let it resolve so he could play Cunning Wish on end step, getting Psychotic Haze. Looter got to work, putting Deep Analysis in the graveyard. Mongrel attacked for three, as Roar of the Wurm was discarded to pump it. Ostrovich decided not to play Psychotic Haze until he had six mana on the table and could protect it with countermagic. In the meantime, Krouner was getting back in the game thanks to the Looter providing card advantage, and the Mongrel put a clock on the table. The Haze resulted in a counterwar, which Krouner won thanks to two Circular Logic.

Ostrovich now untapped, and cast Chainer's Edict, which killed Birds of Paradise. Wild Mongrel attacked for another two points of damage, and a second Mongrel was Counterspelled. Ostrovich played Nightscape Familiar and Deep Analysis, flashing it back in the same turn as well. Krouner got to work getting some card advantage of his own, flashing back Deep Analysis. Ostrovich played Psychatog and attacked with Nightscape Familiar, getting a "Very aggressive" out of Krouner, as a reference to the movie Rounders. This would prove to be a greedy play that was punished, as Ice tapped Psychatog on end step to clear the way for an attack that brought Ostrovich to two. Fire finished it.

Krouner's first turn Birds was matched by Ostrovich's Nightscape Familiar. The acceleration continued with Llanowar Elves, and Krouner played Deep Analysis on the following turn. On end step, Repulse bounced Llanowar Elves. Krouner took his turn and flashed back Deep Analysis, and Ostrovich played a second Repulse on Birds of Paradise. He then untapped, and brought out Psychatog; it was soon attacking and giving Krouner headaches. "Perhaps they shouldn't have printed a 17/18 for three." The first attack with the Familiar and 'Tog only resulted in two damage. Krouner used Fire on end step to force Ostrovich to tap two mana and save it. He then took his turn and played Phantom Centaur. Ostrovich responded by killing Birds of Paradise with Ghastly Demise, and then targeted Phantom Centaur with Circular Logic. He only had three cards in his graveyard, so Krouner tapped all his mana sources but an Elf to get the 5/3 monster to resolve. This was likely a trap and an insurance policy set up by Ostrovich, since it left Krouner with no blue mana available. He untapped and played Upheaval, floating mana to play Nightscape Familiar. Psychatog came out soon after, and despite Krouner's best efforts to stay in it, the toothy metagame dominator proved to be too much.

Ostrovich- "I drew a lot of lands that game."
Krouner- "As long as those lands come with Upheaval, it's fine."

Both players got key creatures out right from the start, with Nightscape Familiar on Ostrovich's side, and Looter on Krouner's. Mongrel followed, and Ostrovich cast a second Familiar. Krouner brought out Phantom Centaur, and Ostrovich tapped one mana on end step to play Cunning Wish, getting Hibernation. He untapped, and played a third Familiar, followed by Deep Analysis. Hibernation for one mana was cast soon after. The resulting counterwar was won by Ostrovich, but left him tapped out. One Mongrel changed color since it was pumped for Circular Logic, while the other was bounced along with Phantom Centaur. The 5/3 monster came back out, and Ostrovich played an end step Fact or Fiction for one mana. 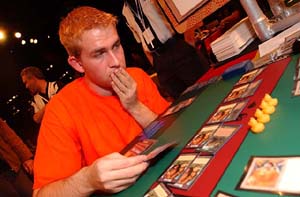 Krouner- "What the? I thought Ancestral Recall was good! I guess it's not good enough in this format"

The resulting five cards were good ones, and Krouner let out a hearty laugh that had a tone of desperation. "I liked this matchup a lot more when all your spells didn't cost one." The piles presented were Fact or Fiction/Circular Logic/Underground River and Ghastly Demise/Repulse. Ostrovich took the two card pile, and used Demise to kill the Looter. Repulse targeted the Mongrel, but Krouner had Circular Logic. It still left the board thanks to Chainer's Edict, leaving Krouner with only the Centaur. It attacked for five damage, and Squirrel Nest improved things a little. Ostrovich attacked with all his Familiars, so Krouner made a squirrel and blocked one. This allowed Ostrovich to kill the Centaur with another Edict, and Krouner needed to find some answers fast. Ostrovich played Cunning Wish on end step, and Krouner responded with Fire on two Familiars. Repulse bounced one in response, and the other died. Cunning Wish now resolved, and got Opportunity.

Ostrovich summoned his fourth Nightscape Familiar of the game, going back to having three in play. Opposition was Counterspelled, but Krouner had Gainsay. Thanks to Squirrel Nest, Krouner now at least had a chance to get back in the game. Ghastly Demise killed Llanowar Elves on end step, and Ostrovich played a main phase Opportunity for three mana, attacked, and played Fact or Fiction. Krouner made the piles Psychatog/land and Chainer's Edict/Counterspell/land. Ostrovich took the three card pile and used Edict to kill a squirrel, and Ostrovich Counterspelled Birds of Paradise. Edict was flashed back to keep Krouner's squirrel population at zero. Repulse on end step brought Birds back to Krouner's hand, clearing the way for a lethal Familiar attack.

Krouner had a first turn Elves, which died to Chainer's Edict. Merfolk Looter came out a few turns later, and Ostrovich's end step Fact or Fiction was countered with Circular Logic. Another Edict killed the Looter. Opposition resolved, and Ostrovich played a main phase Fact or Fiction that revealed four lands and Deep Analysis. Krouner made the split four lands and Deep Analysis, and Ostrovich took the lands. Merfolk Looter was followed by Llanowar Elves, making Opposition a little more threatening. Cunning Wish got Psychotic Haze, which was cast right away on main phase to wipe out Krouner's creatures. This did leave Ostrovich tapped out, but Krouner only had Birds. Chainer's Edict was flashed back to kill it, and it tapped a land before dying. This left Ostrovich tapped out once again, which let Phantom Centaur hit play. Ostrovich flashed back a second Edict. 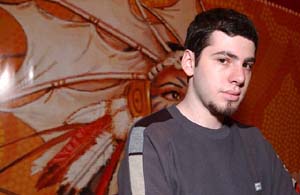 Krouner- "I didn't even see that."

Ostrovich now began to take total control of the game, flashing back Deep Analysis and playing Nightscape Familiar. Krouner summoned Flametongue Kavu, so Ostrovich Repulsed his Familiar in response. After a counterwar the Flametongue shot itself down, and Cunning Wish got Opportunity. Krouner was tapped out, so Ostrovich played Nightscape Familiar, Psychatog and Opportunity all on his turn. Birds of Paradise was keeping Krouner in the game by a thread, tapping down Psychatog. Ostrovich played yet another 'Tog, which was enough to win the game and the match.