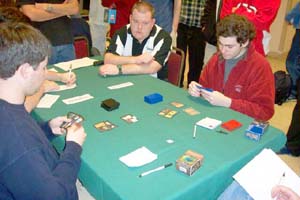 Does it get anymore rogue than this? Morgan Douglass piloted Tinker, the most dejected and discarded of potential extended archetypes, to a Top 8 finish. His first round opponent: Diego Ostrovich, whose current Elves! deck quietly slipped to some impressive finishes at PT Houston. Among the cards in their two decks are Crumbling Sanctuary; Predator, Flagship; Planar Portal; Slate of Ancestry; Skyshroud Poacher; and Fecundity. If this extended season has proven anything so far, it's that the metagame can accommodate all different types of decks and builds.

Diego won the die roll, and opened with a first turn Birds of Paradise. Morgan answered with Voltaic Key, and Diego could only play a land and pass the turn, off to an uncharacteristically slow start. Douglass capitalized on this immediately by playing Rishadan Port, further locking down Diego. The third turn saw no action on the Argentinean side of the board, so Douglas decided to run away with the game by dropping Ancient Tomb, using it to cast Thran Dynamo, used the Dynamo to cast two Voltaic Keys, untapped the Dynamo twice, and cast Mishra's Helix.

Well, at least Diego got to drop Skyshroud Poacher the following turn before things went from bad to worse. Morgan untapped, Tinkered the Helix for Masticore, and wiped the board clear of creatures. Diego managed a pair of Ravenous Baloths, but only because Morgan was busy setting up a Stroke of Genius for seven. The stroke yielded seven artifacts, including a quickly-played Metalworker. Between the two keys and the Metalworker, Douglass generated an obscene amount of mana, shot down the two Baloths plus a freshly summoned Masticore on the other side of the board, and still had dozens of mana to spare. Wisely, Diego conceded. 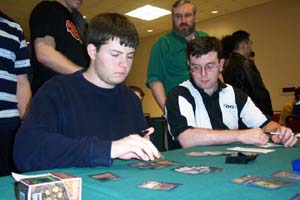 Elves! decided to pump out some namesake creatures early this time, with Llanowar Elves and Rofellos jumping from hand to table on the first turns. Tinker accelerated with Ancient Tomb for a Tangle Wire, which slowed the game down to snail's pace. This game though was all green and no brown, as Diego laid land after land to power up Rofellos, and started dropping Ravenous Baloth and Call of the Herd. In addition, he found the time to preemptively nab Uktabi Orangutan from the sideboard.

With his life looming precariously low, Morgan stroked himself for seven again, but this time lacked any action cards. He attempted to Tinker both Crumbling Sanctuary and Masticore onto the board, but the Orangutan monkeyed around with the damage preventer, and the horde came across through the Masticore. An additional Deranged Hermit joined the team, but Morgan couldn't find enough mana to shoot down Diego's board, succumbing to his horde. 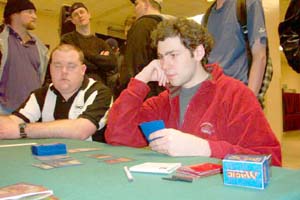 Sometimes, the game just doesn't work out for either player. Morgan started out with a mulligan, only to be one-upped by Diego's double mulligan. However, Morgan stalled on two lands until turn six, while Diego went turn four Llanowar Elves, turn five Deranged Hermit, Gaea's Cradle, Masticore. Morgan failed to find the land he needed to do anything, and quickly succumbed.