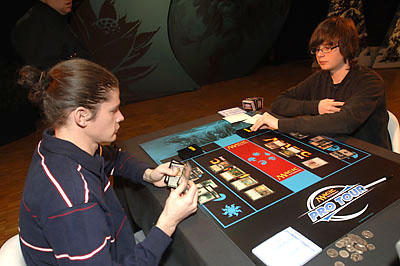 Mike Hron and Marijn Lybaert are both competing in their first Pro Tour Top 8.or many players, the first round of Sunday can be particularly tough. Already exhausted from two long days of play and then trying to sleep through Top 8 nerves, players now have to deal with jitters over big money and a potentially life-changing opportunity, all under bright lights and the weight of scrutiny brought by thousands of spectators. Given all that, the first game of the day is often crucial, because it offers a chance to calm those nerves with the comfort and confidence that comes from starting things off right. That goes double given that each of these players is competing in their first ever Pro Tour Top 8.

Given all that, the day did not start off well at all for Marijin Lybaert. Playing second, he had to take a mulligan and only managed to play a Mana Skimmer and an Empty the Warrens for two Goblins, getting dropped to an astonishing -4 life before getting to his sixth turn! Hron pulled it off with Essence Warden, Shadow Guildmage, Thallid Germinator, Spectral Force, and then a Tromp the Domains-fueled attack for 21 damage.

For this one it was Shadow Guildmage, Darkheart Sliver, and a Yavimaya Dryad for Hron, while Lybaert had Ridged Kusite, Foriysian Totem, and a Basalt Gargoyle to hold the fort. Lacking any red mana from his splash color, Hron wasn't able to use his Guildmage's ability and didn't have enough power to get through the Gargoyle and its remaining mana, so for now he had to be content with adding a Thallid Germinator to his team.

Paying the echo on his flier, Lybaert went back on offense with it, making the totals Hron 16, Lybaert 17. Hron went for the opening, sending his whole team in, but the Kusite blocked the Dryad then discarded a Dark Withering with madness to gain first strike, sending both the Dryad and the Thallid Germinator to the bin. A tough hit, but Hron came right back with Citanul Woodreaders to refuel his hand.

This time it was the Totem and the Gargoyle coming in, knocking Hron to 9. Hron attacked with his own team to make it 11 for the Belgian, added a Mire Boa to his forces, and used his remaining mana to Strangling Soot the Gargoyle for good measure, drastically improving his position in the process.

Lybaert wasn't out yet, though. Hardcasting a Phthisis on Woodreaders and dropping his opponent to 4, he was present the real threat of another Phthisis the next turn - which would certainly explain the aggressive attacks the Belgian had been sending in at each opportunity.

With the totals now at 4-11, Hron had a trump in the form of Tromp the Domains, powering out an attack for exactly Lybaert's life total. With only a Kusite up and no mana, Lybaert's only choice was to chump the Guildmage and drop to 1. Hron used Wurmcalling for a 1/1 with his final mana and passed the turn back. As expected, Lybaert had the second Pthisis, but the only creature big enough to kill Hron was the Darkheart Sliver. With no other possible way to win the game, Lybaert made the right move and pointed it at the Sliver, hoping for the free win, but Hron immediately sac'd the Sliver for 3 life, saving his own life in the process. With no way to survive the crackback, Lybaert conceded immediately. 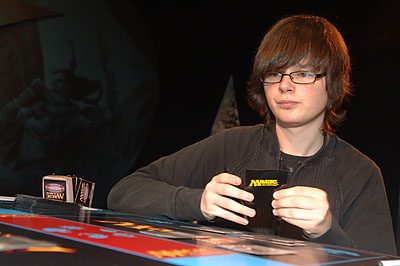 This time it was the Belgian's turn to smash the opponent up right from the start. Suspended Phthisis followed by a Trespasser il-Vec, Reckless Wurm the following turn off madness threatened to run right over Hron's slow start of nothing but a suspended Corpulent Corpse so far. Hron tried to rally, firing off a Search for Tomorrow with the first Forest he'd just drawn, quickly getting another and dropping out an Essence Warden, but a Foriysian Totem plus Grapeshot put an end to the life-gain plan for now.

Stuck with nothing at all in play for blockers, Hron was forced to play his only out for now, Spectral Force. The dreaded Phthisis clicked down to one counter, and the Trespasser dropped the American to 6. Drawing one last time, Hron quickly conceded the game.

Lybaert laughed for the first time in the match: "Come on! Let me do 16 to you!"

Hron smiled. "I needed a Forest that hand. I kept a hand without green and paid for it."

Lybaert nodded. "I actually needed a Swamp for my hand, but I drew it right when I needed it on the second turn."

This time Hron was much more aggressive on the start, leading with Search for Tomorrow (suspended), Ashcoat Bear, and Thallid Germinator plus Shadow Guildmage. Lybaert had his expected Phthisis suspend, followed by the same treatment for a Shivan Meteor to stem the bleeding. In came Hron's team, dropping Lybaert to 13, followed by a problematic Mire Boa. Falling increasingly behind, Lybaert had to Empty the Warrens for two Goblins to try and buy some time. Again the team came in, this time met by two chump blocks, putting Lybaert at 11. Worse, a suspended Greater Gargadon threatened to put the game completely out of reach should the Belgian's guard go down at the wrong time.

Shivan Meteorreally wiped out the Germinator in upkeep, and Coal Stoker helped power out a triple Grapeshot to finish off the Boa, but the Gargadon clicked down to seven on Hron's upkeep. Studying his hand carefully, Hron made a very nice play this turn, sending in his Bear. Too low on life to risk it, Lybaert blocked the Bear with his Coal Stoker. There was no trick, though, and the Bear died. Tapping out, Hron added a Gauntlet of Power to the board, setting it to green for his three Forests.

Ticking his Phthisis down to one, Lybaert had just a Foriysian Totem and passed the turn back. Untapping and drawing his card, Hron completed his plan by pinging his opponent and then saccing the Guildmage to his Gargadon, putting the opponent at 8 and sending the turn back, having cleverly cleared his side of the table of any creatures to target with the Phthisis. Unfortunately for Lybaert, that particular card is a must when on the stack, so he was forced to off his own Coal Stoker, losing a 3/3 and dropping himself to 2 life at the hands of his own spell that he'd waited so long to cast. 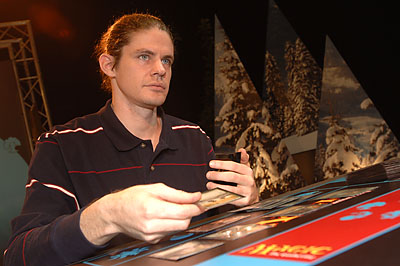 Passing the turn back, Hron was ready with the finisher. Doing some math and tapping all the mana into his pool needed thanks to the Gauntlet of Power, he sacrificed three lands to bring out the Gargadon, then used the floating mana to drop the dreaded Tromp the Domains on the already enormous hasty mountain of power. The massive beater was way too much for Lybaert to handle, and he conceded as soon as it tapped to attack, smiling at the size of the monster pointed his way. Asked when he had picked the Gargadon, Hron pointed out that he had actually sideboarded it in for this match. Lybaert was stunned. "You're not playing it main?"

Hron smiled. "I only have one Mountain. I brought it in against you because I knew I'd need answers to all those Phthisis you have."