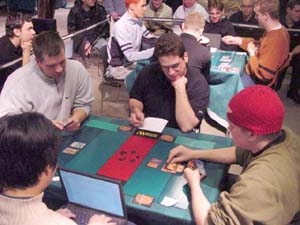 Both players have a good start for this season. Dirk just came out of his win in Boston with his Foundation. Boberg is a Swede from Linkoping, still unknown intenationally. He is qualified for Houston at the PTQ GP London, his first ever. The top 8 here earned him a slot for PT Chicago on his first try.

Dirk thought that it was very strange that Jesper Nielsen, the Head Judge, decided that the decklists should be revealed to the opponents, especially as this was a limited rochester GP.

Dirk kept 2 swamp land and a Barren Moor, and 2 black cards, not a good hand for his heavy Blue, light black deck. He circled Baren at the end of turn. Unfortunately for him, he never drew a land that game again. When he annouced that he wanted to move to his discard step on his third turn, Bob Maher turned and commented that ¨discard¨ was probably Dirk´s favourite word, since he succeeded in losing every other match with mana trouble at PT Boston.

Boberg kept a 3 moutain and 2 morph cards hand. When he morphed up his Charging Slateback on turn 5, Dirk said "whatever".

Fredrik played a turn two Sparksmith. He then succeeded in drawing the island he needed on turn 3, and used it to play out his Mistform Dreamer. Dirk's turn 3 was Crown of Suspicion to kill off the Sparksmith. Boberg attacked with his Mistform, played out a morph creature and passed the turn, missing his turn four land drop. 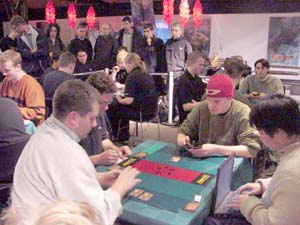 Dirk played a turn 3 morph creature. Boberg played the Lavamancer's skill on the Mistform, then changed its creature's type to wizard. The wizarded Mistform then killed off the morph creature.

Dirk played a Screeching Buzzard. Boberg used the same wizardry trick with his Mistform to kill off the Buzzard. He was now in total control of the game, as he kept the pressure on with his creatures, while Dirk couldnt play out his morph cards in hand and couldn't find a fifth land.

Fredrik would have to fight to an uphill, never ending battle against Bob Maher, Jr. in their semifinal match, as Bob had a very strong deck with lots of removal and heavy beasts.