had fallen into place for Geoffrey Siron in the Top 8 of this Pro Tour. A unique assortment of packs allowed Siron to monopolize almost all of the red at the entire table; in fact, his opponent Oiso is the only other player using any red cards at all, and it's only a slight splash. As an example of the ridiculousness, he managed to score Ghost-Lit Raider and Undying Flamesout of the same pack.

In fact, I'm quite willing to claim that this was a battle of the best deck at the table versus the worst deck at the table. Oiso's draft was essentially a train wreck, with players on both sides stealing cards of his colors. He ended up in three colors and still had to run sub-optimal cards like Promised Kannushi and Bile Urchin to fill out his deck.

When I talked to Siron after the draft, he was quite confident. "If I don't win this PT…" he said, shaking his head at the thought. "I may even beat Masashi Oiso," he added, grinning. It was said in jest, but it's absolutely indicative of a simple fact. Oiso has earned a huge amount of respect for his play skill from his fellow pro players. Anything could happen here on Sunday.

Siron won the die roll and elected to play first with a hand of Blademane Baku, Ogre Recluse, Akki Underling, and four Mountains. Oiso, with the less consistent deck, chose to send his hand back, and then kept his six. 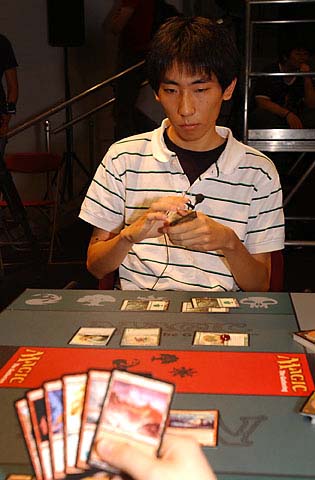 An all-too-familiar sight for Masashi Oiso -- not enough land, and a huge grip for Siron.

Siron curved out with Akki Underling, Blademane Baku, and Ogre Recluse. Oiso had a key Rend Flesh for the Ogre, but no fourth land. Ghost-Lit Raider from Siron added a counter to the Baku and made life difficult for Oiso as it took down a Kami of the Hunt. Oiso still had no fourth land and also had no play on his turn.

When Siron played a fifth land and a Moonlit Strider, he attacked and removed two counters from his Baku, and Oiso had nothing. He took nine damage and fell to zero.

There was no sideboarding from either player.

Oiso elected to play first, but was on the back foot early when Siron deployed a pair of Frostlings. He traded a Petalmane Baku for one of them but again failed to find a fourth land. Siron, on the other hand, was in danger of stalling on two lands but drew the third and fourth right on time. The fourth brought with it an Ogre Recluse.

Oiso drew, praying for a land, and found Rend Flesh instead. The Ogre died, but Siron continued the assault with Kami of Fire's Roar, and then a second one on the following turn. Meanwhile Oiso was still stuck on three and could only play Bloodthirsty Ogre. Frostling took it down.

Promised Kannushi had no hope of ever blocking, and Ronin Houndmaster made the situation even worse. Oiso drew and quickly conceded.

O-Naginata and Petalmane Baku showed up for Oiso, but Siron trumped with a turn-two Akki Underling, a play that's quite powerful on the draw. The Underling cracked in for four on the third turn and Siron summoned the devastating Ghost-Lit Raider. The universe was surely mocking Oiso at this point, as he again stalled on three lands, this time three Forests. He could only make a Kami of the Hunt and add a counter to his Baku. 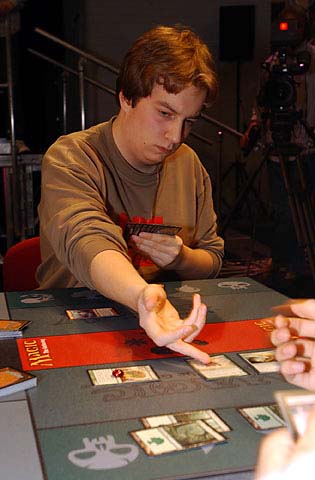 Siron untapped and lapsed into thought. He tapped three lands, untapped them, then tapped them again and gunned down the Kami of the Hunt. Underling got in for two and Siron chose not to play a land. He had six cards and intended to let the Underling go large again next turn.

Oiso, still stuck on three Forests, looked simply miserable. He has a wonderfully expressive face, but it was currently expressing nothing but sadness, and lots of it. He used his Baku for a black mana, then played Bile Urchin, replacing the counter, and paid another for a Blinding Powder. The Underling attacked for four.

A Swamp was waiting on top of Oiso's library and Sosuke, Son of Seshiro leapt into play, giving Oiso some hope, but Siron's hand was filled with gas. Barrel Down Sokenzan dealt with the Snake and refilled to seven for the Underling. Siron attacked and played out another creature.

That was all it took. Oiso was eager to end the nightmare, and he simply threw down his cards and offered the hand. It just wasn't his day.