Quarterfinals: Down With the Sickness 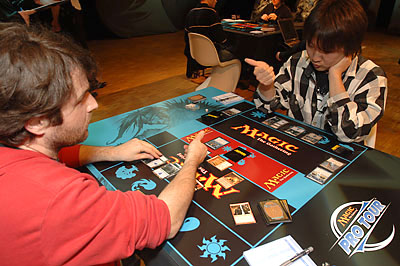 elcome back to the Quarterfinals of Pro Tour - Geneva. The flavour of Time Spiral is all about creatures from the past slipping into the present through rifts in time, so it's kind of appropriate to see Jim Herold making a Pro Tour Top 8. Herold picked up some Grand Prix wins around the turn of the century but hasn't really been heard of since.

His opponent is a much more present threat. Takuya Osawa bashed his way to victory at Pro Tour - Prague last year and was in the running for Player of the Year for a while.

Osawa looked like he might be in trouble in the draft as he started taking black cards right after Marijn Lybaert, but the quality of the black cards was amazingly high, and he picked up an astonishing three copies of Phthisis for a very strong blue-black deck.

Jim Herold is not short of bombs, either, as he has both Draining Whelk and Bogardan Hellkite.

I'm just waiting for the moment Herold Whelks the first Phthisis only to get walloped for sixteen by the second….

Although Herold kicked off, it was Osawa who had the first action as he suspended an Errant Ephemeron on turn two. From then the Japanese player appeared to hit some mana problems. He missed a third land but was able to suspend a Veiling Oddity. He found a third Island only to have his face down Shaper Parasite nailed by Sudden Shock. He finally got a black source when Phyrexian Totem enabled him to suspend a Corpulent Corpse.

Meanwhile, Herold was steadily pinging away with Prodigal Pyromancer. He added Needlepeak Spider and Viscerid Deepwalker to the mix. When Osawa's Errant Ephemeron finally arrived, it was left on defence and had to trade with an attacking Deepwalker.

Herold thought for a while before allowing damage on the stack. Once he was satisfied the Ephemeron was going to hit the 'yard, he made sure his Deepwalker lived by pumping it with Brute Force.

The board position looked pretty good for Herold. His Pyromancer was active, and his Deepwalker was larger than Osawa's Veiling Oddity. Then Osawa somehow managed to stabilise. A Midnight Charm took down the Pyromancer, and a Crookclaw Transmuter trick made the Oddity big enough to trade with the Deepwalker.

This left Osawa with a Transmuter to Herold's Aetherflame Wall and a Corpulent Corpse about to come out of suspension. Oh, and don't forget the Totem. That went charging into action after Conflagrate fried the Bird Wizard.

Now things definitely looked bad for the German. He had nothing else but a bunch of land in play and a single card in hand. Osawa had the Totem, Drudge Reavers, and a Corpulent Corpse.

At this point the story could have gone, "Osawa activated the Totem and… Oh my god, that's a Bogardan Hellkite!"

However, the Japanese player showed an uncanny level of sixth sense. The Totem stayed inert, and although the massive Dragon did jump in, barbeque the Corpse, and kick the Reavers around a bit, Osawa was able to calmly avoid catastrophe by killing the Dragon with Cradle to Grave.

That was an excellent read on the situation that makes more sense when you consider that Herold had a Conflagrate in the graveyard. Why was he laying land he didn't seem to need?

I'd have probably run the Totem in, but that's why I'm here writing instead of playing.

The Conflagrate was flashed back to remove the Reavers and a Sage of Epityr, but it wasn't enough to stop the Phyrexian Totem from finally crashing through to take Game 1. 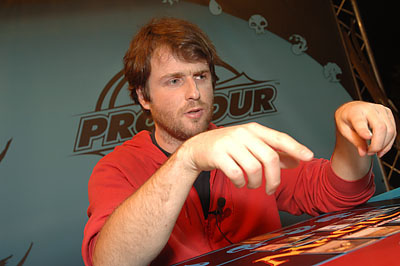 Herold again had a fairly slow start (for Time Spiral), as his first play was a morph on turn three. Osawa had already played Sage of Epityr and suspended an Errant Ephemeron, and now he was able to match the morph with one of his own. The Japanese player showed absolutely no respect for Jim's morph as he threw his own in the way. His was the disposable Aquamorph Entity while Herold's was… well, we'll have to wait a little longer to see that, as he had a Brute Force to save it.

The wait wasn't too long, as it happened, as Herold turned over his own Aquamorph to smash for five. With a Pyromancer in play, Herold had the advantage in this race.

Osawa hit back with a Mana Skimmer and then added Veiling Oddity. His Ephemeron was about to come out of suspension so it looked pretty…

Oh wait, the Ephemeron was met with Dismal Failure.

Ouch, that had to hurt, especially as Osawa discarded a Phthisis. Some cards really rub salt into the wound, and this is one of them.

Even after that it still seemed like the Japanese player had the advantage. A Coral Trickster traded with the 5/1 Entity, and Herold hadn't really added anything to the board since his Pyromancer. Osawa summoned a face down Slipstream Serpent, only for it to be tagged in morph form by a Conflagrate.

Still no critters for Herold. In fact he'd been horribly flooded. This was revealed when he discarded a hand full of land to Conflagrate all of Osawa's monsters (with the help of the Pyromancer).

The Pyromancer being tapped allowed a Crookclaw Transmuter to nip in to leave Herold at a precarious 1 life. The Pyromancer set the annoying bird on fire, and then Herold nailed a land with Avalanche Riders.

Now it was all about whether Herold could race Osawa's empty board to zero before the Japanese player got back to seven lands for Phthisis.

Osawa had the land to get to seven, but the Phthisis didn't land just yet. Maybe he didn't have it or was waiting for a safer opportunity. This may have given Herold some hope, but not for long, as the black game-ender struck on the following turn.

Herold again had a very slow start, so damaging in this format. This time he didn't even have a morph for turn three. Meanwhile Osawa was really showing the value of the suspend cards as a Corpulent Corpse and then Veiling Oddity was thrown into the time stream on turns one and two. On turn four Herold's first play arrived as he bounced Osawa's morph with Stingscourger and suspended a Deepwalker. 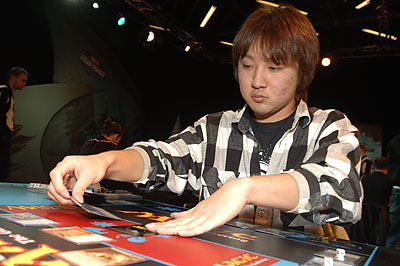 Don't let the stripes fool you.

Osawa merely replayed the morph, or another, along with a Sage of Epityr. He followed up with Gorgon Recluse while Herold was still paying echo for the Goblin-o'-War.

This was a perfect example of how to use mana efficiently from the Japanese player. Up until turn five Osawa had laid a land on every turn and used every single point of mana available.

This was turning into a nightmare for Jim Herold. He ran a Stingscourger in, but Osawa didn't take the bait. The next turn both the Corpse and Oddity arrived, and Osawa sent the whole team in for a whopping 10 damage. Against a deck with three Phthisis, the last thing you want is to lose half your life in a single swing.

Herold had to use his Rough then, but thanks to a Shaper Parasite it couldn't even kill Osawa's Sage of Epityr. In fact it killed absolutely nothing, and he needed to use Sudden Shock to finish off Osawa's Corpulent Corpse.

That wasn't nearly enough as Osawa's team swung again and he hit the inevitable seven mana for Phthisis.

It was all very frustrating for Herold, as he had both Dismal Failure and Draining Whelk in hand but had never been able to find a second island.

Takuya Osawa beats Jim Herold 3-0 and advances to the Semifinals.