Less then a year ago, Chris Benafel went to PTLA an unknown player and took down the PT's finest. He then went to US Nationals where only Jon Finkel himself was able to stop him. Now qualified for the Masters series and widely known as one of the Pro Tour's newest stars, it is Benafel who brings the advantage of experience to his quarterfinal match with Milwaukee's Dustin Stern. 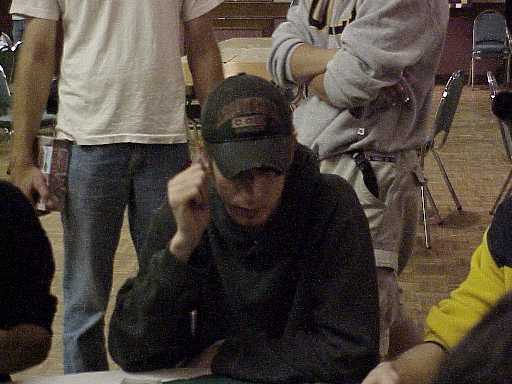 A relatively new player, Stern only started playing at the beginning of the Mercadian Masques run, but he's quickly picked up the nuances of the game. Along with Brian Kowal, Stern makes the 45 minute drive to Madison, Wisconsin each week in order to practice his drafting with Bob Maher, Mike Hron and a number of other PT regulars. This weekend it finally paid off, with Stern making his first premier-level event top 8.

Game 1 started quickly, with Stern, playing first and casting a Spirit Weaver, to which Benefel responded with Obsidian Acolyte. With Dustin casting a Drake Horn Cameo, followed by a Capashen Unicorn, Chris could only watch as he struggled to find his non-Plains land. By the time Chris found a Forest, Dustin had cast a kicked Benalish Lancer. Chris Harrowed, retrieving a Mountain from his deck, and then cast a Pincer Spider in the hopes of eventually mounting his own offense.

Dustin, firmly in control, continued the onslaught, playing a Glimmering Angel, but now Chris had his mana, allowing him to Shackle the Lancer and cast a Thornscape Apprentice, followed by a Razorfoot Griffon, tapping all but one Plains. This allowed Dustin to activate his Unicorn, with Chris' attemp to return the Shackles met by a Dismantling Blow with kicker. Regardless of Dustin's drawing two cards though, Chris still looked to be in control thanks to a newly cast Benalish Trapper which joined the fray in tandem with a Nomadic Elf.

Still trying to maintain an offense, Dustin cast a Prison Barricade while attacking with the Angel, but it was not to be. With Chris playing a second Griffon, even Dustin's Sleeper's Robe and Stormscape Master weren't enough to save him, with the Griffons eventually carrying Benafel to victory.

Game two saw an unusual twist, with Dustin electing to draw first. Chris started things off with a second turn Benalish Trapper, with Dustin again playing a turn two Spirit Weaver. Chris then cast a Quirion Elf, naming white, with Dustin 'replying' with a Capashen Unicorn, which he felt was strong against Benafel and weak against the rest of the draft. It was at this point that Benefel started to take control. After his Angel of Mercy was met by a Tower Drake, Chris cast a Razortooth Griffon. With Dustin's inability to find a black mana source, he could only muster an Ardent Soldier as the white flyers started hitting for five a turn.

With Crypt Angel and Sleeper's Robe in hand as a result of his lack of black mana, Dustin couldn't even muster the mana to pay the kicker on his Benalish Lancer. With Chris having an Explosive Growth in hand, he attacked with the flyers and kicked for the win, allowing him to move on to the semi-finals against the winner of the Dan Clegg/ Ben Romig match.