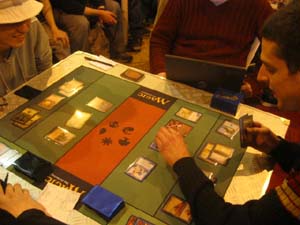 Eivind Nitter always smiles. Always.An European Champion is going to make the semifinals in this Grand Prix. Germany's David Brucker won the title this year and Norway's Eivind Nitter was victorious in 2001.

David drafted a white/blue deck and is splashing some red for Lightning Rift and Lavamancer's Skill. His best card is a Mistform Skyreaver. Eivind can easily compete with that – his first booster contained a Silvos, Rogue Elemental and his second a Sparksmith, which became even better with the introduction of Legions.

Nitter won the roll and decided to go first. His draw proved to be less then stellar as all he could do on his third turn was to cycle a land. David had a better draw, his Lightning Rift hit the table on his second turn and a Mistform Wall was the first creature on the table. Eivind answered seemingly disappointed with a Skirk Outrider, but David had a Mage's Guile ready and killed the 2/2 with the rift. The extra card still didn't provide Brucker with the 4th land though. Nitter dropped a Barkhide Mauler and attacked past David's freshly cast Keeneye Aven. 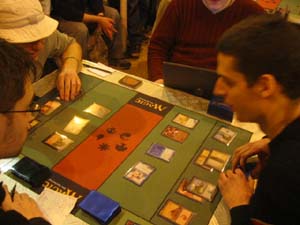 Leaning over the table, looking for an edge.When Eivind tapped GGG3 and summoned Silvos on his 6th turn, all David could say was 'Sure!'. He proceeded to draw his card, which turned out to be no Plains and scooped up his cards, proclaiming that he doesn't feel like playing against such crappy cards.

David boarded a Disruptive Pitmage to give him a small chance to deal with the Pit Fighter and chose to go play first.

Both players were happy with their hands again and Brucker let with a Secluded Steppe. After cycling a Forgotten Cave on his first turn, Eivind played a second one on the following, holding a third. He cycled that on his third turn but could not cast a spell anyway. David had nothing on his third turn and sighed when he drew his card for his fourth, as all he could do was pass the turn, without playing a land or a spell. Nitter's attempt at Skirk Outrider was met with a cycled Complicate and that gave David his fourth land. A Keeneye Aven followed on his turn and attacked on the next one after the Norwegian dropped a Wirewood Elf and his Sparksmith. The goblin looked a lot less threatening when the Lightning Rift was cast on David's next turn. Nitter was not really impressed. He drew his sixth land and cast his Silvos. David had another excellent card in Lavamancer's Skill but it still didn't seem to be sufficient against a 8/5 regenerating beatstick. His attempt at racing the pit figher was met with a Needleshot Gourna and David's fliers looked suddenly rather puny. 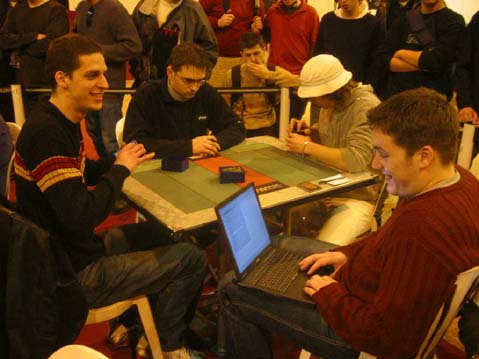 Brucker chatting with the Sideboard Reporter.Even a Glintwing Invoker with eight lands on the table was way too small, as Nitter summoned another huge beast with Enormous Baloth. A Berserk Murodolont hit the table before Eivind entered his attack step. Being down to four life David had to chump the incoming Silvos and he blocked the Baloth as well, leaving himself without any creatures facing three creatures with a combined power of 14. David dealt Eivind six points with his Lightning Rift on his turn but then shook Nitter's hand and wished him good luck in the semifinals.