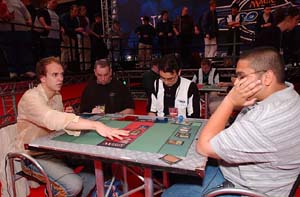 When Jeff Donais, funny man that he is, announced the pairings for the quarterfinals as "Eivind Nitter versus Gary M.F.T.," Eivind leaned over and asked his opponent, "What does that mean?"

Gary explained, in so many words, that the "T" was for "Talim," and the "M.F." stood for what "M.F." usually stands for in gangsta lingo.

Eivind laughed and said, "Oh, I thought it was 'My First Tour.'"

While Eivind is a veteran of many tours, it is both players' first Top 8. And, interestingly enough, they both drafted green/red. Nitter has a big advantage, though, as his high-end spells include Beast Attack, plus he has a 2-to-1 advantage on Leaf Dancers.

Gary T started out quickly in Game 1 with Mad Dog and Ember Beast. Nitter tried to race with a Krosan Avenger, but he was forced to trade a 2/3 Krosan Archer with the Mad Dog when Gary T Reckless Charged it.

Eivind dropped a Cartographer and swung with the Avenger again, bringing the life totals to 15 to 14 in his favor. Talim upped the ante with a Centaur Chieftain and swung with the team. Eivind had a Muscle Burst, so he thought for awhile before blocking the Ember Beast with the Cart and then Bursting. It always sucks to kill the Ember Beats when there's a chance you can strand it by killing everything else, but sometimes you just have to bite the bullet, and Eivind made a good play by doing so.

Nitter drew his second Muscle Burst and attacked with just the Avenger again. Gary untapped, drew, and Blazing Salvoed Eivind's only blocker – Cartographer – before attacking. Eivind Muscle Bursted it in response and let it take 3 damage. Talim, thinking Eivind's Cart was 5/5, attacked with his own Cart. Eivind blocked, and Gary was quite surprised when re realized Eivind's survived because it was actually 6/6 due to the first Muscle Burst in the graveyard. The American looked quite crestfallen at his mistake.

Talim made a Squirrel Nest and passed the turn. Eivind then made a great play of Refreshing his own Avenger, and Sonic Seizuring Talim's Chieftain in response, pitching a land. The card he drew off Refresh? Another Sonic Seizure. Eivind attacked Talim down to 2 and then Seizured him out on the next turn.

Nitter leafed through his sideboard, and started chuckling when he found a Pitchstone Wall waiting there. He sided it in for a Skyshooter, and also sided in a Cartographer for an Acorn Harvest, figuring the second Cart could help hold the ground if Gary drew his Nest again.

Game 2 was not close. Eivind kept a hand of 5 land, Firebolt, and Rites of Initiation, and never actually drew a creature card. He Firebolted Gary T's Basking Rootwalla, and later flashed it back on a Krosan Avenger, but couldn't stop Spark Mage or Cartographer. Elephant Ambush traded for Centaur Chieftain, but Eivind was dangerously low on life. There was one point where Eivind could have killed a couple creatures with Temporary Insanity if he had more cards in his graveyard. He cast Rites of Initiation (with no creatures on his side) just to fill the graveyard, but lost the Insanity at random and scooped. 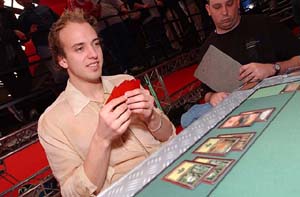 Eivind's poor luck continued into the start of game 3; he had to mulligan a 0-land draw. Talim started quickly with a turn-1 Rootwalla, a Firebolt for Eivind's Krosan Avenger, then a Spark Mage.

Eivind took a lot of early damage but eventually got out a Possessed Centaur that blocked the Rootwalla and was Refreshed. He then played a Squirrel Nest and dug in. Unfortunately for fans of the fast game, Talim played his own Nest, and the token generation began in earnest.

Nitter kept attacking with one squirrel, offering a trade. Talim declined; he was happy taking one per turn and letting things build up so that he could eventually win with Centaur Chieftain or Rites.

Nitter wasn't drawing much – he put out Leafy MFD (Leaf Dancer) and Chainflinger, just to force Gary T's hand. Chainflinger died at the hands of Barbarian Lunatic, and Leafy MFD was Firebolted out of the 'yard. Eivind eventually upgraded his one-squirrel attacks to one-Possessed Centaur attacks. Talim kept taking the damage, hoping to draw one of his winners. It didn't happen.

With both players at 7, Nitter sent in the Centaur again, and when Talim declined to block, he Muscle Bursted it for +4/+4 and the game.

Talim had the Rites in hand and claimed he would have won on the next turn, but Nitter was holding Acorn Harvest, which he planned to cast had the Centaur plan fallen through. 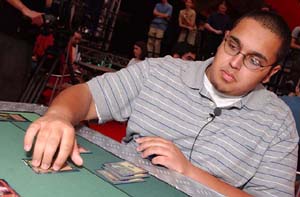 This was best-of-five, so there was still more Magic to be played. Nitter sided in two Nantuko Calmers for a Cartographer and a Krosan Archer; he was clearly getting tired of dealing with Talim's Squirrel Nest.

Talim brought forth Leafy MFD and got in two attacks with it before Nitter Sonic Seizured it, discarding Beast Attack. Nitter made an Elephant Ambush token and got one hit in, but Gary double-Firebolted it on his next turn. Eventually Gary got his Nest upp and running, and once again the squirrel tokens looked to take over both sides of the board.

But this time, Eivind had a good answer: Chainflinger. Gary T couldn'r keep his squirrels around for long once the red pinger went active. Nitter flashbacked his Beast Attack, swung for a whole bunch, and Sonic Seizured for the match.

Nitter now goes on to face Svend Geertsen in the semifinals.