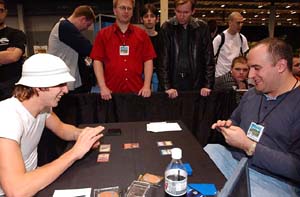 Eivind Nitter and Gary Wise, good friends, are two of the sillier members of the Pro community. Both of them are always good for a few laughs and a lot of controversial behavior, including oddball antics during matches. The two of them roomed together at the Invitational and came up with the Mystic Enforcer threshold deck they played in both constructed formats. Of course, they're both Pro Tour winners and are playing for a few thousand dollars, but that doesn't mean there won't be talk flying.

"We finally meet after four years," said Nitter as he shuffled. Wise played Nitter at the Norwegian's first PT, and wasn't impressed. Suffice to say he's changed his tune and now considers Eivind one of the best in the world.

Wise was the only blue drafter at the table, and was rewarded with a deck full of flyers with backup from a couple goodies like Blatant Thievery and two Meddles. His deck is susceptible to Sparksmith and creatures with fear. Eivind has none of the former, but quite a few of the latter, so it should be interesting. To balance things out, Eivind has two Thoughbound Primocs in his deck, which are awful against the only blue deck at the table.

Nitter made the first play, a Spitfire Handler. "I chose that over Sparksmith," he joked, "I don't like taking commons." The Goblin hit once, and then Nitter made a morph.

Wise's draw was slow, and his first drop was a Dive Bomber on turn 4. Nitter swung in, and Wise was faced with the classic "Commando or Craghorn" dilemma. He inhaled, and then decided not to block. Eivind said, "Take three," and put out Battering Craghorn. Disaster averted for Wise. He untapped and played a Daunting Defender, leaving the Bomber back on defense.

Eivind thought long and hard after dropping his fifth land. After several minutes (and a few barbs from Gary), Eivind cast Swat on the Dive Bomber and said go. Gary was holding a Meddle, but that card isn't great when you're tapping out every turn.

Gary opted against tapping out on his next turn, and it paid off. Eivind tapped five and cast Cruel Revival on the Cleric, but Meddle turned the tides, burying Eivind's morph, which was a Thrashing Mudspawn. Eivind glared at Gary for a moment. 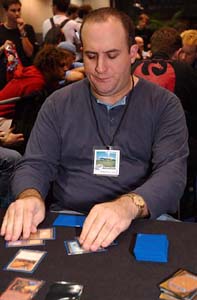 Gary Cloned the Defender on his next turn and swung in with the original. Eivind attempted what looked to be a desperation Erratic Explosion on the Clone, which needed to be for five in order to kill it. "Let's see how good you are," said Gary, and could only shrug when Nitter turned up some random one-mana Goblin.

In general, when the Explosion misses, the game is practically over.

Gary didn't disappoint, swinging in with his Clerics each turn and drawing a Pacifism to handle the Gluttonous Zombie Eivind played. As Gary swung in for the last few points, Eivind marked his life down as "-5" and that was that.

Gary sided out his Blatant Thievery (which is actually very good against Eivind) and a Piety Charm for the second Meddle and a devastating Crown of Awe. Eivind sided out one of the Primocs; it sat in his hand the entire first game.

In one of those weird twists of fate, neither player had a third land—or a creature in play—on turn three. Gary even cycled a Choking Tethers but couldn't find a land and had to discard an Inspirit.

Both players found the elusive third land on turn four; Eivind put out his Primoc, and Wise answered with Gustcloak Harrier. He was holding a Mistform Dreamer, and asked the head judge about its interaction with the Primoc before moving on. 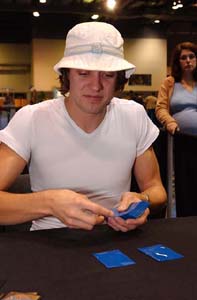 Eivind killed the Harrier with Erratic Explosion (revealing four land before hitting a spell, each one eliciting a groan) and attacked. Wise played his third Plains and an Ascending Aven. Eivind drew and attacked, then it was pointed out that Gary couldn't have played the Aven with WWWU. Head Judge Mike Donais consulted with his team before ruling that Gary had the option of taking a game loss or untapping his land and playing nothing on his turn. Gary argued briefly, but then picked up the Aven and moved on.

Eivind played a morph and attacked, then Gary played land number 5 and summoned a Mistform Shrieker. Eiving attacked into it, and Gary blocked the morph. Eiving was a swamp short of flipping over the Grinning Demon, so it just died. Gary admitted that he thought it was Haunted Cadaver, and felt good that he managed to kill something much worse.

The two were racing with their fliers when Gary added another Shrieker. Eivind hadn't drawn any of his removal, and even if he had, Wise was sitting on Meddle. The Ascending Aven came down and Nitter was overwhelmed in the air.

Skipping turn 5 ended up not hurting Wise at all.