Being crowned National Champion would be a big feather in the cap of Elijah Pollock, closing out a season that's seen him do so well with his teammates from 2020. Unfortunately for him, he's sitting across from Nathon Braymore and his mono-black control deck. That bodes ill for the veteran Pollock, who is with Blue-Green Madness, a deck he audibled into because he had the flu. 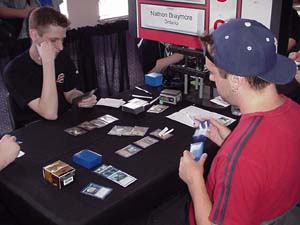 Pollock started things with a Careful Study that sent Deep Analysis and Wonder to the graveyard. Braymore hit him with a Duress to see what was up, and it seemed like Pollock's gambit had gone horribly awry. Pollock held Merfolk Looter, Phantom Centaur, Arrogant Wurm, Circular Logic and Unsummon, but no second land. He lost the Logic. He proceeded to rip a forest and play his Looter.

"Of course I drew the forest, this is the Top 8." – Elijah Pollock

He wasn't done. Forest number two was waiting on top of his deck, so he could Loot into Arrogant Wurm. Braymore Edicted away the Looter, but Pollock was rolling. He flashed back the Analysis and played Wild Mongrel.

"Do you have the Mutilate?" – Elijah Pollock

"I can't tell you that." – Nathon Braymore

Braymore Scryed for two and got bashed down to eight. Pollock didn't even pause before throwing down Phantom Centaur. Braymore scooped.

"Last night in playtesting I was 0-8 in presideboarded games. After boarding it gets a lot better, but that was just embarrassing." – Elijah Pollock

Braymore kicked off Game 2 with a first-turn Duress. It showed Pollock's hand to be four land, Aquamoeba, Logic and Deep Analysis. Braymore stole the Logic and passed it back. Pollock played his island. Braymore wasted no time in busting out Nantuko Shade. Pollock's Aquamoeba seemed weak by comparison.

The hits kept coming for Braymore. He swung for two and brought out Withered Wretch. Pollock tried discarding his Analysis to the Aquamoeba, but Braymore was quick on the Wretch's ability.

"You can't fool me." – Nathon Braymore 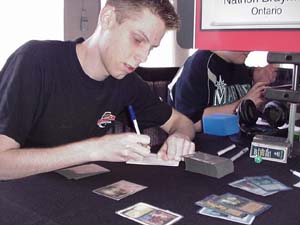 Elijah hit for three but had nothing further. Braymore hit back for six. Pollock stood on four land, taking more damage, and again on five. Braymore added another Shade to the table. That was enough to convince Pollock to scoop.

"I had to try to mise with Deep. My draw was so bad." – Elijah Pollock

Pollock started the third game with City of Brass and Rootwalla, then swung for three on the following turn. Braymore made no play on two swamps, and Pollock tried to hit for another three. Smother forced his Unsummon. He dug for cards with Deep Analysis while Braymore brought out more swamps. Pollock flashed back the Analysis and made a Mongrel. Braymore had another Smother. Pollock had another Unsummon.

Braymore played his fifth swamp and was done. Pollock again tried a Mongrel, and this time it stuck. Braymore made his sixth swamp. The Rootwalla jumped out at end of turn. Pollock untapped, Studied away a pair of Wurms, cast one, and still had mana open for Circular Logic. It looked like a coup. Braymore calmly untapped, dropped Cabal Coffers, and followed up with Mutilate for six. Pollock had to pitch three cards to Logic it. Braymore spent his last six for a Corrupt on the Wurm token.

Pollock made another Roar token and swung in, bringing Braymore dangerously low. He played a seventh swamp, Chainer's Edict, and then Flashed it back, but Pollock had the Logic to shut it down. He bashed again and played and replayed a Deep Analysis, giving Braymore one more turn with a suspicious single blue up. Braymore drew, but was out of gas, and scooped.

"You know how I was 0-8 presideboarded? Wanna know the grand total? 1-23. I've now doubled my playtest victories." – Elijah Pollock

Pollock led with a Careful Study, and almost drew three cards off of it. Braymore made a disappointed face when Pollock caught himself. There wasn't much good news to be found for Pollock, though. He surprisingly pitched a pair of Phantom Centaurs. He played a second island on the next turn, and showed the weakness of his hand. He did have an Aquamoeba. Braymore's third land was Cabal Coffers.

"This is nice, he's manascrewed and my draw is god-awful." – Elijah Pollock 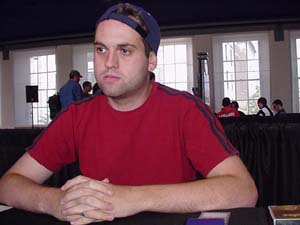 Pollock started to swing while Braymore found another Coffers. He hit again, but then Braymore found a Withered Wretch. A second Aquamoeba did little to help Pollock's position. Skeletal Scrying for one got Braymore the swamp he so desperately needed. Another swamp followed and he was able to clear out Pollock's yard after a forest finally decided to show up for him.

That was all to clear the way for Visara the Dreadful. Unsummon bought Pollock a turn after Braymore played Mirari, but the big legend just came back down. Pollock had no play, just five lands. When Braymore Tutored and Forked it, Pollock was sure he was done. However, Braymore didn't go for a Duress, so Pollock would get one more chance to topdeck land six for his Upheaval.

He did just that.

Braymore was first on the board with Withered Wretch, and Edicted away Pollock's Mongrel. He had another, but Duress forced out Circular Logic. Visara hit the table again. The Mongrel hit again, trading a Roar from hand for Braymore's Wretch. Pollock got gutsy with a Phantom Centaur. Braymore wasted no time Mutilating away the board.

Pollock flashed back his Roar, and was exposed to be empty-handed by Braymore's Duress. A flashed-back Edict took care of the token. He topdecked a Looter and played it, but Braymore's plays of Visara and Nantuko Shade outshined his. He Looted up a Centaur only to watch it Edicted away with Visara's help. He conceded.

Pollock led with Mongrel in the deciding game, but Braymore had Smother at the ready. Pollock pitched Deep Analysis and spent his third turn flashing it back. Braymore played a swamp and was done. Pollock tried Merfolk Looter, but it too fell to Smother. Braymore took a moment to Diabolic Tutor, and he didn't take long to choose Visara.

Pollock tapped out to hard-cast Deep Analysis, and Braymore Tutored again, this time for Cabal Coffers. Pollock flashed back his Analysis and Studied Rootwalla into play, ending his turn with three mana open.

Braymore went for it. He played a swamp and tried Visara. Pollock didn't even shake his head as he showed the Circular Logic. Pollock cast another Analysis and played Aquamoeba with a blue mana open. Braymore made a second Coffers and tried Mutilate. Pollock Enveloped. Braymore Mutilated again.

Pollock had a lot of options. Braymore was low on cards. He hard-cast Roar of the Wurm and gave it back to Braymore, who found a backbreaking Skeletal Scrying for seven, with enough mana left over to Edict away the token. Pollock's advantage had evaporated. He flashed back his Analysis and Roar, but was in trouble. Duress exposed two Phantom Centaurs, Roar of the Wurm, Deep Analysis and Logic. He took the Logic, but had to burn for the excess mana in his pool to get it out of the madness zone. He still had enough left over to Edict the token and summon Visara.

Pollock clung to the hope that he'd be able to draw into Upheaval. He Unsummoned the beast and worked his Analysis. He did manage an Aquamoeba, then protected it from Edict with Rootwalla, but Braymore's next spell was Smother, and Rootwalla was no help against that. A big Corrupt finished things.