elcome to the Quarterfinals, Magic fans. The undisputed marquee match of this Top 8 was guaranteed to occur as soon as the bracket was revealed, but unfortunately it would happen here in the quarters instead of the more dramatic final match. Regardless, any time you get a big money match with ten Pro Tour Top 8s between the two players, you have to be excited. 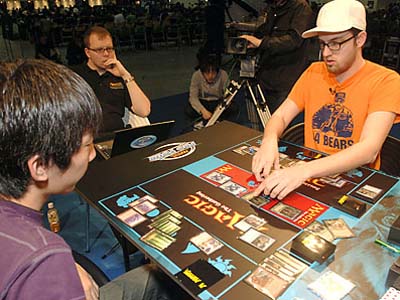 Masashi Oiso and Mark Herberholz are two standouts in a very impressive Top 8.

Masashi Oiso has been here 5 times before, but only once did he manage to make it out of the quarters, and he has never played in a Pro Tour final. He's hoping to turn that dream into reality here this weekend, but his way is blocked by an American Pro Tour Winner with a deck advantage and a growing reputation that may some day equal Masashi's. Despite his often casual disregard for showing up at events with all of his faculties in order, the hard-partying Mark "Heezy" Herberholz is now widely considered the best American player on the Tour, and was a consensus pick by the coverage staff to win this Pro Tour. That's a good thing for the Michigan native, since Heezy needed a great result here this weekend to pay his tax bill after last year's big win and subsequent spending binges. His Top 8 appearance here has him at least pocketing the appearance fee for his trouble, while the rest of his prize money at this point will go into Uncle Sam's pockets.

Always confident, during testing last night Mark discovered that the matchup wasn't as easy as he had initially believed since Oiso's deck could roll him if it got an accelerated land destruction start. Without it, "The Taxman Cometh" had a clear advantage over Oiso's green-red deck, but with a little luck, Masashi could still pull things out.

Oiso lead off and suspended Search for Tomorrow on turn one, while Herberholz used Terramorphic Expanse to search up a Plains. Turn three gave Oiso Wall of Roots, but he passed on turn four, clearly dismayed at how things were progressing. A turn-five Call of the Herd finally gave Masashi a beater, the 3/3 drawing first blood a turn later. Oiso played Prismatic Lens to help get past his mana screw and then chuckled when Herberholz chucked his lone maindeck Disenchant at it. Oiso made a second Elephant token with a fresh Call, but that just gave Mark an excuse to play Damnation. Draining Whelk took care of a Harmonize from Oiso, and then a Mystical Teachings in response to Spectral Force had Masashi looking for help out of his sideboard for Game 2.

Oiso's eyes narrowed when he looked at his opening hand for game 2, taking three minutes before deciding to keep . Prismatic Lens on turn 2 off of two Mountains was his first play, and then a second Lens plus Call of the Herd hit the board on turn 3. Meanwhile Heezy was busy turning Terramorphic Expanses into Islands. Oiso's elephant token began bringing the beats while a pair of Cancels shut down the Call flashback and a Mwonvuli Acid Moss and Heezy refueled his hand via Careful Consideration. Disintegrate for 6 took Mark down to 5, but that's when the Tendrils of Corruption package hit, and Heezy went right back up to 11 life, dispatching the rogue elephant in the process.

Oiso wasn't done though, pressing the action with Spectral Force, losing it to Damnation, and then slamming down Bogardan Hellkite to keep the pressure on. Another Damnation wiped the dragon from the board, but now Mark would have to deal with Urza's Factory chucking workers at him every turn in addition to Masashi's spells. Teferi provided a nice big butt for blocking, but another Call from Masashi sounded, dumbo-dropping two more Elephants. Heezy once again had a willing blocker to clog the way, and this time Aeon Chronicler drew him a card before coming into the game. That was all the help Heezy would need. Careful Consideration drew him four more cards from his deck while chucking a useless pair of lands plus Pull from Eternity into the graveyard, and now all Mark really needed to do was find a damage source to ride out while continuing to play defense.

Oiso sensed this, and sent his entire team into the red zone, dropping Mark to 1, but that was as close as he would get. Teferi was helping Heezy play a different game than the Japanese master, Tendrils of Corruption gave him another 10 life, and Haunting Hymn made sure that Oiso had nothing left in hand to change the game either. Oiso's back was now firmly against the wall, and he'd need to win three in a row to have any chance of claiming an elusive Pro Tour win.

Oiso's mulligan for Game 3 had him shrugging his shoulders as if saying, "What am I supposed to do?" The matchup against Herberholz was always going to be a tough one, but he was getting no help whatsoever from either Mark's draws or his own. An acceptable six cards gave him a suspended Search for Tomorrow on turn one, and then Mwonvuli Acid-Moss on turn three, finally getting a solid start. 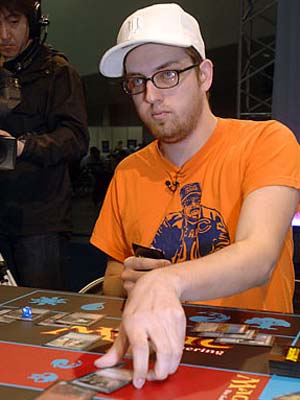 'We're on a mission from God.'

Suspended Detrivore on turn four certainly put Mark under the gun, but Careful Consideration off of two lands and two Lenses at least gave him a chance… until Avalanche Riders also whacked a land as well. Damnation cleared away Masashi's attackers, but Call of the Herd gave him another pair of Elephants, dropping Herberholz to 6 on the next attack. Draining Whelk on Search for Tomorrow gave Heezy a blocker, once again forcing Oiso to settle in and ponder his next move. He eventually chose to pass the turn with no attack while making an assembly-worker at the end of Mark's turn instead.

The next turn saw Oiso ship three creatures into the red zone, but his face was totally crestfallen when Heezy blocked an elephant with his Whelk and then killed the second with Tendrils of Corruption. What did he have to do to win a game?! Disintegrate for 1 removed the Whelk from the board, and Oiso suspended Detrivore for two, looking to take out some mana in the hope of gaining any sort of edge. Heezy was having none of it, callously tossing Pull from Eternity in the 'Vore's direction and piling on Oiso's misery.

The ridiculousness of Mark's dominance wasn't complete yet. You'd think Bogardan Hellkite might cause some problems, but despite the Cancel in hand, Heezy let it through. Oiso chose targets for the comes into play ability, and then Heezy played Temporal Isolation on the dragon, nullifying an eight-mana spell with his two-mana response. The denouement here took some time to complete, but the result was never really in doubt. Herberholz eventually sealed the game with a hefty Draining Whelk and Aeon Chronicler in a game that was over long before it ended.

There would be no joy in Japanese Mudville today-Masashi Oiso had once again fallen.

Mark Herberholz advances to the Semifinals!