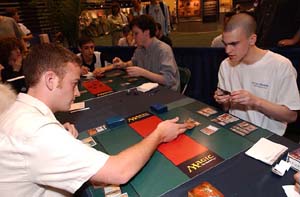 Jesuale's opening hand spells weren't spectacular for the matchup. He had some lands, a pair of Fire/Ice, and a Flametongue Kavu. Still, he chose to keep his hand. Able to cycle Ice on his opponent's land, or take out a Nightscape Familiar, he was confident in being able to draw into better stuff by the time he needed it for this slow match. Franz opened with a usual assortment of lands, card advantage spells, bounce, and the deck's marquee creature – Psychatog.

In most control matches, a player who is able to lay a land every turn and out-mana their opponent tends to have a significant advantage. In this case however, both players were drawing plenty of lands, with literally not a single spell being cast over the course of the first eight turns of the game. EFranz was pulling ahead in the land-laying marathon, with eight lands out to his opponent's seven, when he dared to cast the first spell of the game – a Nightscape Familiar. Jesuale had no counters in hand (or in his deck), but used two Fires at the end of turn to force Franz into spending four mana to regenerate his Familiar and remain with just two untapped Islands. On his turn, Jesuale cast Flametongue Kavu. In response, Franz tapped out to Repulse his Familiar, Repulse costing two mana thanks to its ability. Jesuale also tapped out to cast Urza's Rage, killing the Familiar and preventing his opponent from drawing a card off the Repulse.

Jesuale was now the one tapped out during his opponent's turn. It left Franz free to summon another Familiar and cast Probe with kicker, knocking Jesuale down to two cards in hand. Franz discarded Memory Lapse and Psychatog, which must have scared Jesuale quite a bit as those are the quality of cards you would usually keep, speaking volumes about the quality of Franz' hand. On his next turn, Franz attempted to summon Psychatog. Jesuale, who still did not draw a single permission spell, cast Fact or Fiction in response, only to have it countered. Tog resolved, and another Fact was countered via Circular Logic. Jesuale observed the state of the game as it was slipping away. "I have Threshold!" he announced, eliciting smiles from his opponent and the audience.

Franz resolved Fact or Fiction, picking up Upheaval and a land. With Jesuale at twelve life points, Franz cast Upheaval, leaving two black and a blue mana in his pool. He played a land, and summoned both of his creatures again.

Playing first, Jesuale put early pressure on with a turn 2 Goblin Legionnaire. Franz matched with Nightscape Familiar. Jesuale had Rage in hand, but failed to draw a third land to cast it with. He got two points of damage through with Legionnaire, but chose not to use its ability to shoot down Nightscape Familiar while Franz was tapped out. 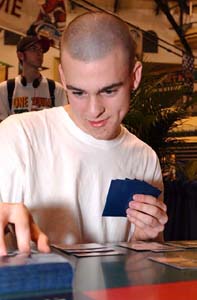 With Jesuale mana-hosed, Franz played aggressively, summoning a turn three Psychatog, and protecting it from Gainsay with Memory Lapse. Lapse was simply amazing in this situation as it sent a non-land card on top of Jesuale's library, effectively time-walking him at the worst of times. With his opponent tapped out, Franz cast a main phase Fact or Fiction picking up three lands.

Two turns later, when Jesuale finally drew a third land, he tapped out to cast Goblin Trenches. It resolved, but Franz knocked Jesuale backed a turn by casting Recoil on Coastal Tower. A glutton for discard effects, Franz followed it up with Probe with kicker on his turn, reducing Jesuale to just three cards in hand, two lands in play, the Legionnaire, and Trenches. Another Probe with kicker two turns later brought Jesuale down to only a single card in hand, with three lands in play. In the meantime, Franz was building up his lands in play and his cards in graveyard, getting closer and closer to the Psychatog coup de grace.

With both players counting Franz' graveyard and hand repeatedly, the game was proceeding very slowly. Franz was attacking for one point of damage per turn, waiting to create a situation where he won't have to discard any relevant cards from his hand in order to deliver the killing blow. Another Fact or Fiction resolved, netting Franz a land, Counterspell, and Glastly Demise. He used the demise to take out Legionnaire at the end of turn. On his turn, he finally felt that he had enough resources to go for the kill. He removed his graveyard and discarded a few cards to pump the 'Tog. Jesuale did not even bother trying to cast the Repulse he was holding as he knew of Counterspell in his opponent's hand. He just picked up the cards.

Neither player made changes to their decks, though both went through the motions, hoping to maneuver each other into a poor sideboarding choice somehow.

Jesuale kept a questionable hand of five lands, Repulse, and Urza's Rage. Franz mulliganed but got a reasonable six card hand, and took out Repulse with Duress on his first turn. Much like in game 1, no other spells were cast for several turns, until Franz resolved Fact or Fiction at the end of Jesuale's turn, picking up two lands and an Upheaval over Psychatog and Nightscape Familiar – a difficult choice. 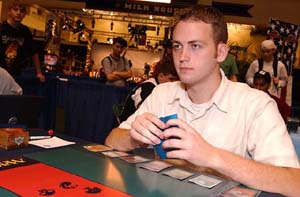 In a refreshing change from the "draw-go" tedium of the control matchup, some permanents actually entered play on both sides of the table over the next two turns. Franz summoned a Nighscape Familiar. Jesuale cast Goblin Legionnaire and tapped out for Flametongue Kavu, but it was Memory Lapsed. Probe with kicker reduced Jesuale's hand to just one card, but left Franz with only two lands untapped. Jesuale attacked for two, but did not try casting Flametongue – which definitely seems like the wrong play here. If Flametongue resolved and Franz regenerated, Jesuale could then use the Legionnaire's ability to kill the Familiar, leaving his 4/2 Flametongue free to attack. If it was countered – well, it would bait a counter out of his opponent's hand.

Franz cast Duress. In response, Jesuale Repulsed a Familiar and showed his opponent Flametongue and Lightning Angel. On his turn, Jesuale cast Flametongue Kavu, forcing his opponent to tap out of black mana, and then cast Meddling Mage, which was countered with Memory Lapse. Franz knew that his opponent had only a Lightning Angel in play and was tapped out. He cast Upheaval floating two mana, put down an Islands and cast Psychatog.

"I don't think he has anything," Franz commented looking at his opponent's sole Island next turn. "Unsummon maybe? Thank God for deck lists!"

Psychatog attacked for seventeen, ending the game and match and qualifying Franz for World Championships. The next two rounds would determine whether or not he gets to make the National team.