This quarterfinal saw Eric James square off against Aaron Breider. Neither was particularly thrilled with their decks after the draft. James went so far as to say that he’d be thrilled to drop in the semis. Breider was somewhat more tight-lipped, but it was clear he’d have a tough road of things assuming he dispatched James. Breider is a former Michigan State Champion, and a well-respected commodity. That goes double for Eric James, whose appearance in this Top 8 was predicted by none other than William Jensen. 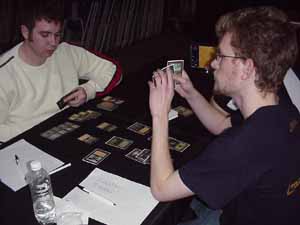 James led with Stonewood Invoker and was matched by Breider. However, James’s third turn had just a cycled Dirge of Dread and an attack for two, whereas Breider beat back and made Timberwatch Elf. He barely reacted when James cycled Gempalm Polluter during his main phase. He played Screeching Buzzard and gave it back.

Before the game could run away from him, James dropped Cruel Revival on the Timberwatch Elf and got back his Polluter. Still, Breider had a clock in the air, and Shepherd of Rot increased it. The Polluter came down, further shortening James’s life span. The scores were nine to twelve in Breider’s favor. He had no play, though, and just swung to bring James to seven. James had a Crown of Suspicion handy to off the Shepherd, and the totals stood five to ten.

He swung in and they traded Invokers. Breider was at six. He drew another land and swung back before dropping his hand, all land, in defeat.

James got an early Festering Goblin, but he was tight on mana, forced to cycle away Swat to find lands. Breider’s enabler was a bit better: Undead Gladiator. He untapped, dropped a morph, met by James’s Stonewood Invoker. Breider made no play. Aphetto Exterminator followed for James without a fourth land. Breider unmorphed Thrashing Mudspawn at eot, then Infested.

The advantage was huge. A meager Bloodline Shaman came out for James. Breider trumped with the Deacon. James drew another non-land, but at least it was Embalmbed Brawler, amplified by one. Breider played Boneknitter and swung for eight. James shrugged and made the double-block. Breider turned over a Wirewood Pride for the two-for one, and consequently, the concession.

Things were not dandy in James Land for game three, either. His grip was expensive with two cyclers, and after forgoing turns two and three to cycle Gempalm Polluter and Dirge of Dread, he did manage an amplified Canopy Crawler, showing Treespring Lorian. Breider had meantime made a 3/3 Embalmed Brawler by showing Shepherd of Rot. His next turn he played Wirewood Savage before swinging in, fronting a Wirewood Pride. James let it through.

On his turn, however, he found his hand was Treespring Lorian, Swat and land. He shrugged and in defiance of signals Swatted the Savage. Breider showed him the Pride. James held back on the sturdy defense of his Crawler. Breider trumped with Toxin Sliver. Now he had three damage a turn. James morphed the Lorian into play.