This quarterfinal match was an extreme case of the old versus the new: in one corner was Eric "edt" Taylor, who, despite being a Pro Tour mainstay from the very beginning, has never made it to the glorious Top 8; in the other corner was Steve Cassell, who is already bringing home a very large paycheck due to his being the top amateur finisher. Eric piloted Trenches at this tournament, and, although many others made the same decision, he was the only person running it to make the final cut; on the other hand, Cassell was one of three players to make the Top 8 with Psychatog, although his version is the only one playing with Standstill. This would be Cassell's opportunity for revenge, as Eric beat him during the swiss rounds. 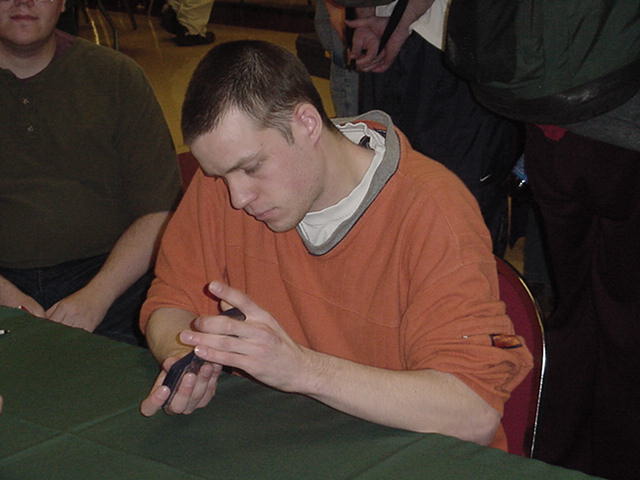 Eric won the die roll, and elected to play first; neither player took a mulligan, and Steve led off with a Turn 2 Nightscape Familiar, which Eric chose to Fire on his following turn. Steve used this opportunity of Eric being tapped out to bring a Psychatog into play, and on his next turn he went for a Standstill, but Eric had an Absorb. Eric missed his 5th turn land drop, and went for a Fact or Fiction on the end of Steve's turn, and Steve split the piles into lands and non-lands. "Land is good", said Eric, as he was forced to send a Prophetic Bolt, Wrath of God, and Repulse to the graveyard for the 2 Islands.

A game of draw-go ensued for several turns while the Psychatog attacked, until Eric tried for a Fact or Fiction, netting himself a land and a Counterspell, and then Repulsed Steve's Psychatog, which Steve Repulsed in response. The Psychatog came back down a turn later, only to be Repulsed again, followed by a Trenches on Eric's side. Steve tried for the Psychatog yet again, which Eric Absorbed, but Steve had another, and it resolved, enabling him to Circular Logic Eric's Fact or Fiction for only 1 mana.

With Steve having only a Psychatog in play and 3 cards in hand, Eric sacrificed 5 lands and made 10 Goblin tokens; however, this left him tapped out, so Steve was able to resolve a Fact or Fiction, netting him Nightscape Familiar and another Fact or Fiction. Eric sent with his 10 tokens, taking Steve to 11, and leaving Eric with 9 tokens in play, but Steve got another Fact or Fiction to resolve, giving him 2 Circular Logics over an Upheavel and Counterspell; however, Steve had another Upheavel in his hand, and was able to get it to resolve with the 2 Logics, and Eric merely frowned, staring at another Counterspell but not enough mana to cast it because he unnecessarily sacrificed extra lands to the Trenches. Steve had just enough mana leftover to recast the Psychatog, and Eric conceded, earning himself a new nickname: greedyt. 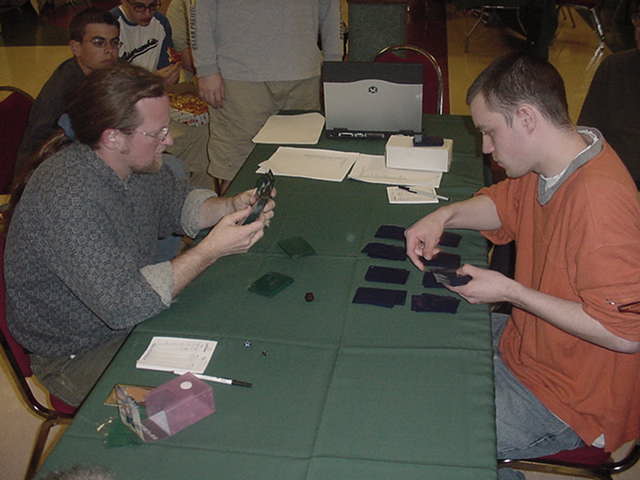 Steve boarded in 4 Duress, 2 Mana Short, and 3 Possessed Aven for 4 Standstill, 4 Aether Burst, and a Repulse, while Eric made an unusual sideboarding choice, choosing to bring in 2 Flametongue Kavu, 2 Gainsay, 3 Lightning Angel, and 4 Meddling Mage for 4 Repulse, 2 Wrath of God, 2 Memory Lapse, 2 Syncopate, and a Prophetic Bolt.

Steve had to mulligan twice, and Eric started off aggressively with a Turn 2 Meddling Mage naming Nightscape Familiar and a 3rd turn Goblin Trenches; however, Steve was ready for the army of small men with a Psychatog, but that couldn't block Eric's 4th turn Lightning Angel.

Steve, stuck with 2 Mana Shorts in his hand, used 1 on Eric's 6th turn end step, in hopes of baiting a counter, but Eric merely responded by making 6 tokens with his Trenches. In the meantime, Steve was stalled on 3 lands, and soon succumbed to Eric's army of men.

For the 3rd game, Steve brought back in his Aether Bursts for a Possessed Aven and 3 Repulses, while Eric brought out the 2 Flametongues and a Meddling Mage for the Prophetic Bolt and 2 Memory Lapses.

Steve led off the 3rd game with a Duress, seeing a handful of lands, an Absorb, and a Counterspell; he took the Counterspell, and then played a 2nd turn Familiar followed by a 3rd turn Psychatog, while Eric brought out a 3rd turn Meddling Mage on Possessed Aven. Although Steve was stalled on 2 lands, Eric couldn't really capitalize, holding a hand full of lands himself. 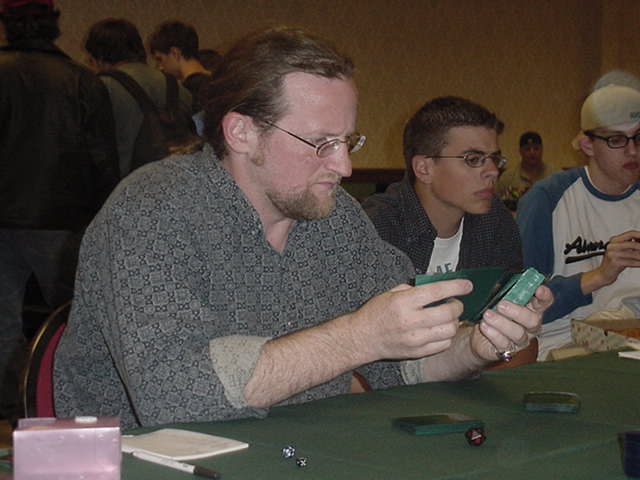 Eric attacked with his Meddling Mage on his 5th turn, hoping to get Steve to block with his Familiar so he could cast another Mage without worrying about a Counterspell, but Steve had a trick in the form of a Mana Short. Steve Duressed Eric on the following turn, seeing the Mage and taking an Absorb, and again failed to play a 3rd land. Eric went for the Mage on his next turn, naming Circular Logic, and then resolved a Trenches; Steve wasn't totally helpless, though, as he Aether Bursted the Mage on Logic, but he was still stuck on 2 lands his next turn.

Eric replayed the Mage, and this time Steve was forced to discard 2 Counterspells to his Psychatog in order to get enough cards in his graveyard to Circular Logic the Mage. On Steve's end step, Eric decided to go aggressive due to Steve's being mana screwed by making 4 tokens with his Trenches. Because Steve had attacked with his Psychatog the turn before, Eric was free to swing with impunity, losing only 1 token to the Familiar. Down to 11 life, Steve decided to leave his 'Tog on the defense, but Eric sacrificed 3 lands to go up to 9 tokens, and while Eric lost his Mage on the next attack, Steve still took 8 damage to go to 3. With no outs in his deck, and facing 10 tokens, he conceded.