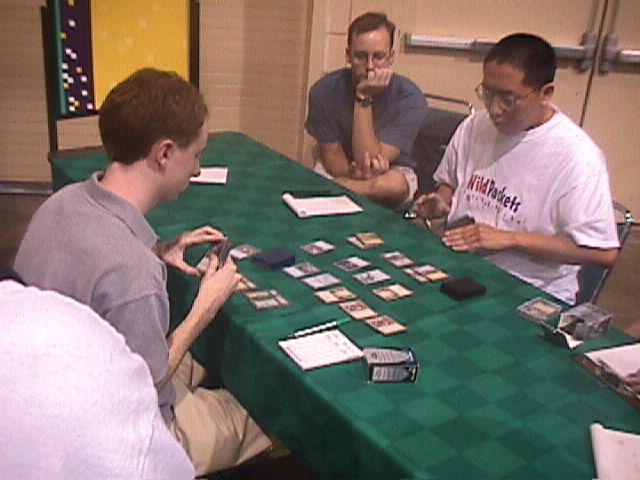 Bin Chen vs. Eugene Harvey This match up pitted one third of the World Team Champions and member of CMU "Eubroken" Harvey against homegrown Atlanta player Bin Chen. Both of the players drafted control style blue white decks in the final Rochester draft. Eugene drafted no counterspells, but he drafted six Mystic Zealots! Continuing the control, Eugene went with combat tricks like Embolden, Shelter, and Psionic Gift. Bin on the other hand, did not get six Mystic Zealots, but drafted two Syncopates, one Scrivener, and several huge flying critters. Both decks appear to be lethargic, but one of the two could come out of the gates with a fast win. 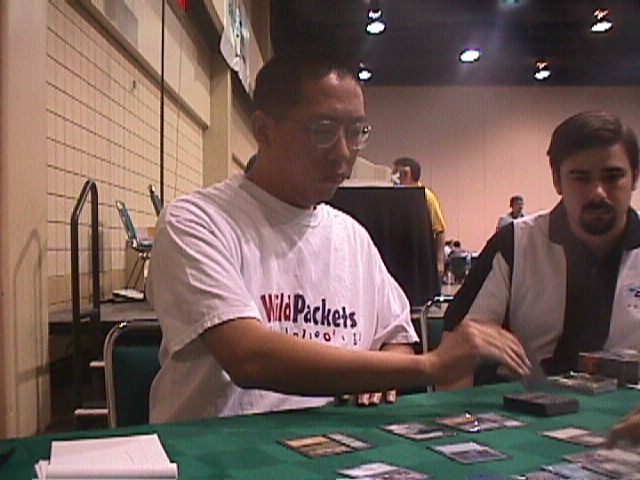 Bin ChenEubroken won the die roll, opted to play first, and laid down the first of many lands. Bin followed that up with a land of his own, and the marathon match was in full swing. The next play from Eugene saw the Cephalid Scout hit the board. Not having a way to deal with it, Chen just cast a huge blocker in the Angelic Wall. The mana hosed Harvey was waiting for his first Plains and when he finally saw it, the first of many Mystic Zealots (1) saw play. Bin was unable to keep up and when Harvey attacked the first damage of the game was dealt. Bin took the next turn, and seemed to slam down an Aven Windreader with proper authority. The bounce was taken out of his step on Eubroken's next turn though, as the next Mystic Zealot (2) hit the table unopposed.

Still Bin was not lacking answers on consecutive turns, Pulsating Illusion and Puppeteer were played, and he had the flying menace on lockdown. The next really important play by either player came on Eugene's tweleth turn. Attacking with three Mystic Zealot, he achieved threshold for the flyers when he aggressively used the Cephalid Scouts ability during combat. Threshold, combained with the local bonus that Blessed Orator gave Harvey's critters made for some huge Zealots. Although bin was able to control the bleeding for a bit, he eventually ran out of stuff to pump his Illusion and Emboldens kept Eugene's critters alive while offing the defense of Chen. On the thirty seventh turn of the game, Chen admitted defeat, and scooped for the second game. 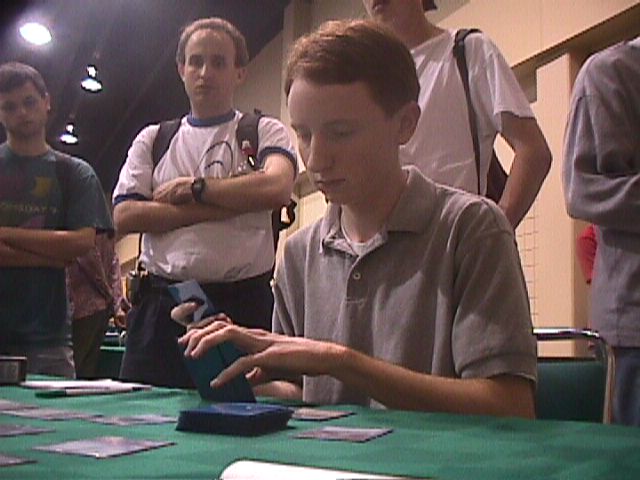 Eugene HarveyThe players were treating this as a very important match. Not a word was spoken in between rounds, and Chen decided to draw first. Although many players agree that drawing first is a must in Odyssey Block Limited, this strategy would not let Bin work out of the savage mana screw his deck would give him.

Eugene kept a strong hand as did Chen, however for Chen to have a chance, he must have access to his white mana. The game was over in eleven turns, after five Mystic Visionairies hit play, and ten turns of missing white mana from Chen. For Chen, this was a disappointing way to end his run.

Eugene Harvey wins the match two games to none.